Thunder vs Jazz Picks: Utah No Lock to Cover Lofty Spread on a B2B

Darius Bazley returned to the lineup Saturday, after missing 16 games, and scored 17 points with nine rebounds and five assists in 36 minutes. A number of OKC injuries should means plenty of minutes for Bazley going forward.

The Utah Jazz are coming off their first loss at home in 2021 and welcome the stumbling Oklahoma City Thunder to Vivint Smart Home Arena Tuesday.

The Jazz, who had won 24 straight home stands before falling 125-121 to Washington on Monday, are massive 16.5-point NBA betting favorites to bounce back versus a Thunder squad lugging a six-game losing skid into Salt Lake City. Oklahoma City has only one win in its last 10 games, going 1-9 ATS in that stretch.

It’s a game only bettors could love. Get our free NBA picks and predictions for Thunder vs. Jazz on April 13.

The Jazz are 9-19-2 ATS in their last 30 games following a loss. Find more NBA betting trends for Thunder vs. Jazz.

Utah is no stranger to big spreads this season, having been pegged as double-digit chalk 14 times in 2020-21 while going 8-6 ATS in those contests. Tuesday’s mountain of points ties as the second-biggest spread the Jazz have played against this year (-16.5 vs. Cleveland on March 29 and -19 vs. Houston on March 12).

On the flip side of this, OKC has been a double-digit dog a dozen times this season. The Thunder are 4-8 ATS when getting handed 10 points or more, most recently failing to cover as 10-point pups at home to Philadelphia on Saturday (losing 117-93).

Some might call it tanking, but Oklahoma City doesn’t own a first-round pick in the upcoming draft. That means OKC’s woes are the product of plain piss-poor basketball. But just how pissy will the Thunder be on Tuesday? The team has enjoyed an extended break since that loss to the Sixers, which wrapped three games in four days for the Thunder.

The Jazz shed the weight of that winning streak and find themselves playing on back-to-back nights for the third time this month, fitting eight games into 12 days. Utah was without guards Mike Conley and Jordan Clarkson Monday and could ease into Tuesday’s game knowing a much-needed two-day break is on the other side of Oklahoma City.

I wouldn’t blame you for passing on this one altogether, but if you’re with me on OKC make sure you’re getting as many points as you can before pulling the trigger on a team as terrible as the Thunder.

The Jazz are extremely stingy at home, shutting down visitors to 104 points on 43.4 percent shooting, which is a drastic drop compared to the 111.4 average points Utah allows on the road. Washington hung 125 points on the Jazz Monday—the most allowed in Vivint Smart Home Arena all season—with the Wizards shooting 52 percent from the field.

That ain’t going to happen with OKC.

The Thunder rank at the bottom of most offensive categories and enter Tuesday with much of their limited firepower in street clothes. Leading scorer Shai Gilgeous-Alexander is out with foot pain, Al Horford has been put out to pasture, and support staff like Mike Muscala and Aleksej Pokusevski are also nursing injuries.

If OKC is going to stay within the 16.5 points put forth by oddsmakers, it won’t be done on the offensive end. The Thunder actually play respectable defense away from home, rising to the challenge to allow less than 111 points against—compared to 116.5 points allowed at home. Oklahoma City has stayed below the total in eight of its last 10 away games.

With plenty of players nursing ailments and OKC wanting to take a good look at its youngsters, second-year forward Darius Bazley will get his share of touches towards the end of the schedule.

Bazley returned to the lineup on the weekend after a 16-game lapse due to a knee injury, scoring 17 points on 7-of-12 shooting in the loss to Philadelphia. The 6-foot-8 forward also pulled down nine rebounds, dished out five assists and added a steal in 36 minutes of action.

On the season, Bazley is posting just 9.38 points per outing but was starting to find his form before hurting himself in early March. He posted 18 and 22 points in two games to close February and had twin 11-point efforts to start March before getting sidelined. 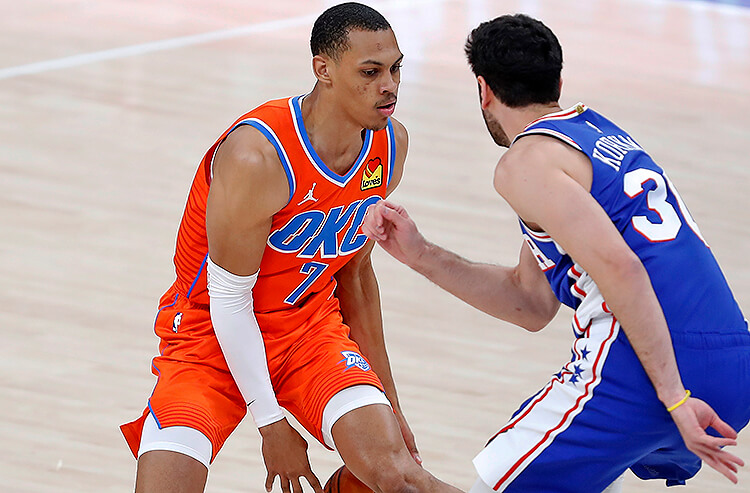 Thunder vs Jazz Picks: Utah No Lock to Cover Lofty Spread on a B2B
Provided by