Chris Paul has been terrific in his first season with Phoenix, averaging 16.0 points, 8.7 assists, and 4.7 rebounds, while earning his 11th All-Star nod.

There are six games on the NBA betting board on Tuesday, headlined by a battle between last year's NBA Championship finalist Miami Heat and the team currently second in the league standings, the Phoenix Suns.

Both teams enter this contest with plenty of momentum, though the Suns are installed as 3-point home favorites.

Here are our best free Heat vs. Suns picks and predictions for Tuesday, April 13, with tipoff at 10 p.m. ET.

The Suns are 27-6 ATS in their last 33 games against teams with a winning SU record. Find more NBA betting trends for Heat vs. Suns.

The Phoenix Suns have proved that their undefeated run in the bubble last summer was no fluke. They have the second-best record in the NBA at 38-15 and have won nine of their last 10 games.

Adding 11-time All-Star Chris Paul to their lineup was exactly what Phoenix needed to turn its potential into reality. The Suns are seventh in the NBA in offensive rating and rank fifth in defensive rating.

Phoenix is fresh off a 126-120 win over the Rockets on Monday night but failed to cover the 12.5-point spread. That said, the Suns have been terrific at covering the spread against quality opponents, going 27-6 ATS in their last 33 games against teams with a winning record.

Miami has been impressive on the defensive end of the floor, sitting sixth in the league in defensive rating, but has struggled on offense and ranks just 25th. Although the Heat have won six of their last seven games, they have a difficult time covering against good teams, going just 2-6 ATS in their last eight contests versus teams with a winning percentage above .600.

The Suns are playing on the tail end of a back-to-back but that hasn't affected them all season, with Phoenix going 9-3 SU and 8-4 ATS on games without rest. Back them to win and cover against a Heat team struggling to put the ball in the hoop on the road.

A big reason for the Suns' turnaround this season has been their massive improvement on the defensive end of the floor. After allowing 113.4 points per game last year, they've shaved that number down to 108.1 ppg this season.

That's bad news for a Heat team that's averaging just 104.4 ppg in away contests, the fourth-worst mark in the NBA.

Thankfully for Miami fans, good defensive play always tends to travel and the Heat limit opponents to 105 ppg on the road. That combination of strong defense and poor offense has helped the Under go 9-1 in Miami's last 10 road contests.

Both of these teams also play at a very slow tempo, with the Suns ranking 24th in the league in pace and the Heat coming in at 29th. With these squads combining for 210 points when they met up three weeks ago, back the Under again.

The Heat are coming off a 107-98 road win against the Portland Trail Blazers but they got off to a poor start, scoring just 25 points in the first quarter. That's been a trend for Miami all season, with the Heat ranking 26th in the NBA with 27.1 ppg in the opening quarter.

The Suns have been very stingy in the early going, allowing just 26.2 ppg in the first quarter, good for the fourth-best mark in the league. Take the Under on Miami's team total in the first 12 minutes. 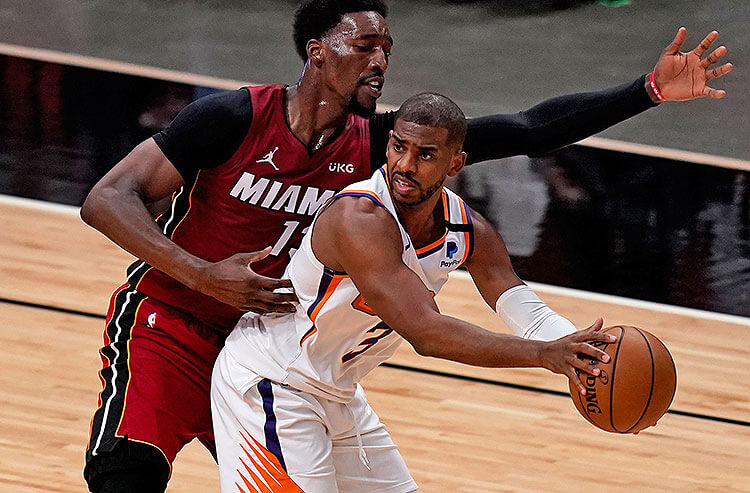