The Battle for the Big Apple between the New York Knicks and Brooklyn Nets tips off Monday’s NBA betting schedule, and all eyes are on the status of Brooklyn’s big names.

Nets superstar Kevin Durant remains out while James Harden returns for this home game versus the Knicks. Durant, who has been out since mid-February with a hamstring injury, is expected back this week while Harden will play for the first time since March 31.

Here are our NBA free picks and predictions for Knicks vs. Nets on April 5.

The Under is 9-2 in the last 11 meetings between the Knicks and Nets. Find more NBA betting trends for Knicks vs. Nets.

The Nets have a huge week of home-court hoops coming, with a nationally televised game against New Orleans on Wednesday and a stand against the Los Angeles Lakers (or what’s left of them) on Saturday. But before those high-profile matchups, Brooklyn must deal with its noisy neighbors on Monday.

The Knicks snapped a three-game slide with a one-sided win at Detroit on Saturday and now play the middle stop of a three-game road trip at the Barclays Center, where they lost 117-112 but covered as 8.5-point underdogs back on March 15. New York has lost both meetings with the Nets this season but has yet to face their full “Big 3” and will once again escape that daunting task tonight.

Brooklyn head coach Steve Nash told the media he expects Durant to return this week and sat both he and Harden in Sunday’s 115-107 loss to Chicago. Harden missed two games, and I believe Durant may plan for Wednesday’s ESPN game with the Pelicans.

The Nets need Harden in the backcourt, with new faces like Blake Griffin and LaMarcus Aldridge added to the roster recently. Since being traded from Houston to Brooklyn, Harden has served as more of a facilitator on offense, averaging 11.2 assists over his 33 games—which ties his career-high from the 2016-17 season. There’s a lot of chemistry to be cooked up for this star-studded lineup if the Nets are going to live up to the hype.

The Knicks’ best win in the past month was over a Giannis-less Bucks team and this club got small with the injury to center Mitchell Robinson in late March. New York struggles against the post-up, watching bigger foes boast a 51.7 percent scoring frequency against those offensive sets.

The Nets weren’t much of a post-up attack before adding the big bodies of Aldridge and Griffin, but Nash will look to get this new-look combo going early, especially with hi-low spacing and two bigs who are capable passers. Griffin, however, is out Monday.

I hope you grabbed Brooklyn early before it was known Harden would return, as the Nets will only jump to bigger favorites by tipoff at 7 p.m. ET.

As mentioned, the Nets have a lot of chemistry work to do on the offensive end and this matchup with the Knicks could serve as Steve Nash’s laboratory. He’s been tinkering with his lineups and with Harden back on the court, Nash will ease his star shooting guard into action with very calculated rotations. Don’t expect an all-out assault from this stacked scoring attack.

The Nets offense, which ranks second in scoring in the NBA (118.7 ppg), has topped that benchmark just twice in the past dozen games, coinciding with injuries to Durant and Harden. Brooklyn has, however, turned up the intensity on defense in that stretch, giving up just 109.1 average points against (versus 114.3 points against on the season) and going 4-8 Over/Under.

As for New York, it’s the premier Under team in the NBA with an Over/Under count of 19-31 heading into Monday (62 percent Under). The Knicks run the slowest pace in the league (96.38) and continue to play lockdown defense on the other end, ranked first in points against as well as defensive field goal and 3-point percentage.

Aldridge was a great pick up for the Nets, giving Brooklyn a versatile scoring threat who can play with this back to the basket as well as create spacing as a stretch five with good range and solid passing.

Aldridge packed the stat sheet in his debut, with 11 points, nine rebounds and six assists versus Charlotte on April 1 and should have another big night against the Knicks, especially with their trouble guarding the post.

I like Aldridge to get his buckets down low but also have the offense run through him in the five-out and flashes to the top of the key, creating dumps inside for a pile of assists. 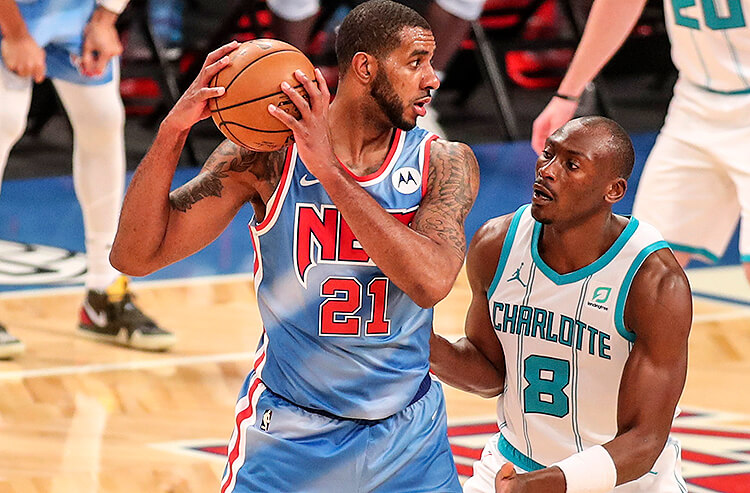