The Golden State Warriors are back home in the Bay Area after an embarrassing Eastern road trip and waiting for them inside the Chase Center are the Milwaukee Bucks – one of the top team’s in the East – playing the fifth stop of a six-game Western swing.

The Bucks have won their last three games heading into Tuesday’s clash with the Warriors, who are hefty NBA betting underdogs after dropping three straight away from home including a 53-point beatdown to the Raptors on April 2.

Check out our best NBA free picks and predictions for Bucks vs. Warriors on April 6.

The Over is 7-2-1 in the Bucks' last 10 games after scoring more than 125 points in their previous game. Find more NBA betting trends for Bucks vs. Warriors.

The Bucks seem like a bad draw for a struggling Warriors team. However, Milwaukee may be just what Steve Kerr’s crew needs to snap out of this haze. Golden State is a prideful club and a chance to get home and get right is on the table this Tuesday.

The Warriors can run with the Bucks, with both teams ranked among the NBA fastest paces, and when they are forced into a halfcourt set they have the ball movement to stretch Milwaukee and create space. Golden State ranks fifth in assists per possession and with Stephen Curry burning up the scoreboard, averaging 35 points over his last three outings (despite a tender tailbone), the Dubs can match Milwaukee’s 3-point threat.

Defensively, Golden State does a good job protecting the rim. It limits opponents to 59.4 percent shooting inside the paint (six feet or less) which is valuable against the Bucks, who rely on close-range looks to anchor their offensive attack.

The Warriors can roll out some different looks at Giannis Antetokounmpo on the defensive end, with Draymond Green able to play away from the basket and outmuscle Giannis while rookie James Wiseman is an athletic 7-footer who can contest the “Greek Freak” down low.

Antetokounmpo struggled from the field when these teams met on Christmas Day (a 138-99 blowout by the Bucks), scoring only 15 points on 4-of-14 shooting, and Green sat out that marquee matchup due to injury.

This line is climbing at most books and the early consensus numbers are leaning heavily toward Milwaukee, given the contrasting trajectory of these teams. If you’re getting down with the Dubs like me, you may want to wait it out and see how many points you can grab before tipoff (10 p.m. ET).

You have two up-tempo teams – Warriors second, Bucks third in pace – that can knock down the triple. Golden State makes an average of 14 3-pointers per home game, where it shoots 38.5 percent inside the Chase Center. Milwaukee is third in success rate from beyond the arc, making an average of nearly 14 looks from outside per road stop.

On top of that, the Warriors can’t keep their hands to themselves. Their aggressive defense has whistles working overtime, getting called for the third most personal fouls per contest in the league (21.7) and sending foes to the charity stripe an average of 26.3 times – most in the NBA. Most recently, the Dubs watched the Atlanta Hawks hit 32 of 45 from the foul line in Sunday’s road loss.

All that offense and plenty of points with the clock stopped will help push the final score past the 234.5-point total.

The Warriors will throw the kitchen sink at Antetokounmpo, which means fellow forward Khris Middleton can set up shop on the wing and benefit from all that extra clean air in front of him.

Middleton is scoring over 20 points per contest on the season and while he shot just 4 of 16 for 16 points against the Kings on Saturday, that came with Giannis in street clothes while he rested his aching knee. The game prior, Middleton made 8 of 13 including two triples for 20 points versus the Blazers.

For what it’s worth: Middleton torched the Warriors for 31 points on December 25. While Golden State clamped down on Antetokounmpo, the 6-foot-7 small forward made 10 of 15 attempts including six 3-pointers, and added five points from the foul line. 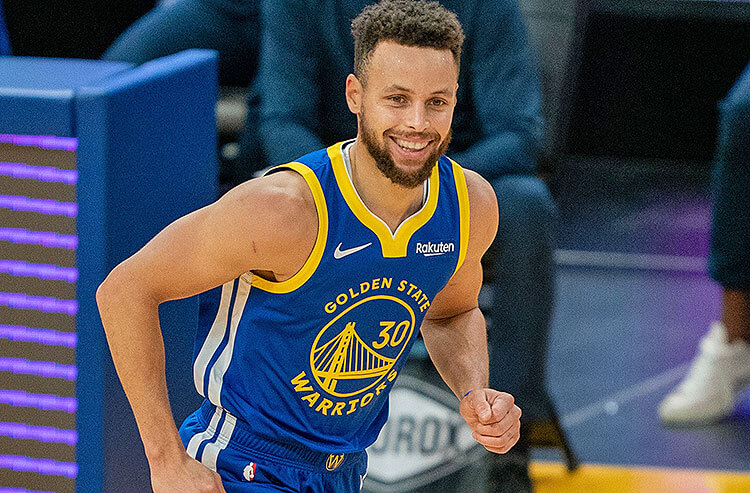