Aaron Judge is up to eight homers on the year and has been demolishing lefties, hitting .357/.471/.679 with a 221 wRC+. The Rays will turn to LHP Ryan Yarbrough after opener Collin McHugh.

The New York Yankees will try to extend their winning streak to four games when they meet the Tampa Bay Rays on Wednesday night for the second contest of a three-game set at Tropicana Field.

After Jordan Montgomery pitched a gem in the series opener, the Bronx Bombers will turn to ace Gerrit Cole for tonight's 7:10 p.m. ET start.

Check out how we think Cole will fare against an AL East rival in our best free MLB betting picks and predictions for Yankees vs. Rays on May 12.

New York bounced from this morning's -215 opener up to -230, then back to -215, which is where DraftKings' moneyline stands at 1 p.m. ET. Early ticket count and money are both running more than 4/1 on the Yankees. The total toggled between 7.5 and 7 a couple of times and is now 7 (Over -125), with ticket count almost dead even, but money running 3/1-plus on the Under.

Gerrit Cole (4-1, 1.61 ERA): The hard-throwing righty is coming off one of his worst starts of the season—and he still worked seven innings and allowed only two runs. That's how good the Yankees' ace is. Cole allowed two bombs and had trouble generating swings and misses off a Houston Astros club that strikes out at the lowest clip in baseball in an eventual 7-4 Yankees loss. Still, it marked the seventh time in seven starts that Cole has allowed two earned runs or fewer, and the seven innings matched a season high.

Collin McHugh (0-1, 7.36 ERA): The right-hander will open for the Rays tonight, something he last did on May 6 when he went two scoreless innings and struck out five against the Los Angeles Angels. Tampa Bay hopes he can catch fire again before turning the ball over to Ryan Yarbrough, who worked in this projected bulk role the last time he got the ball on May 5. Yarbrough was used in this exact same way back on April 18 when the Rays faced the Yankees, with a righty going ahead of him before bringing in the lefty in a more optimal spot. While he threw well that game, Yarbrough has struggled this season and has allowed five-plus runs in three of his seven outings.

The Rays are 1-6 in their last seven games as a home underdog. Find more MLB betting trends for Yankees vs. Rays.

McHugh will be tasked with attempting to neutralize the right-handed heavy lineup for a couple of innings before the Rays throw out a different look and turn the ball over to the soft-tossing lefty Yarbrough, which is when things could get really ugly. The Yankees crush lefties and we're not expecting their bats to be silenced again today.

The Rays, losers of three of their last four, couldn't have a worse possible matchup in their attempt to get back on track.

Cole, the current odds-on favorite to capture the AL Cy Young award, has been better than any pitcher not named Jacob deGrom. In addition to his career-best 1.61 ERA, he's allowing very few long balls and striking out batters at his highest clip ever while walking fewer hitters than ever before, leading to a personal-best 1.29 FIP.

The Rays get punched out at the third-highest rate in baseball and just got fanned nine times by Montgomery last night. We could be looking at a double-digit strikeout performance from Cole tonight—something he's already done four times this season, including once against Tampa Bay.

It's never a good idea to bet against Cole and certainly not when the pitching matchup discrepancy is large and the ace doesn't have to go through an elite offense. That said, there's no value to take New York as a straight-up winner at -200 or higher, so we're going with the Yankees on the runline as we expect Cole to deal and the Bomber bats to mash.

We expected the Yanks to have trouble scoring last night against top prospect Luis Patino and what we assumed would be a number of right-handers to follow, and were partially right. While they did cash just three runs in the win, New York was only able to muster one run against lefty Josh Fleming, who entered after Patino, and worked four innings.

Here's the logic for today: The Yankees will get Yarbrough after McHugh opens and they demolish lefties, so expect the power bats of Aaron Judge and Giancarlo Stanton to come out swinging.

Against southpaws, New York is fourth in the majors in weighted runs created plus with a mark that's 25 percent better than league average. They are the second-best extra-base hitting team versus left-handers, with a .207 isolated power percentage, fourth in OPS (.799), and have the No. 1 home-run-to-fly-ball rate.

Judge is punishing lefties, hitting .357/.471/.679 with a 221 wRC+ (the sixth-best mark in MLB). And he won't be the only righty bat that Yarbrough has to worry about, as Stanton, D.J. LaMahieu, and fresh-off-the-injured-list slugger Luke Voit, among other threats, all bat from the right side.

Cole is very likely to hold the Rays to next to nearly nothing, in fact, that's what we would bet on. But even if Tampa gets just a run or two off him plus any relievers that follow, we like that being enough to push this past the total of 7, which is tied for the lowest number on the board today among the 15 games. In other words, we're expecting a Yankees blowout. 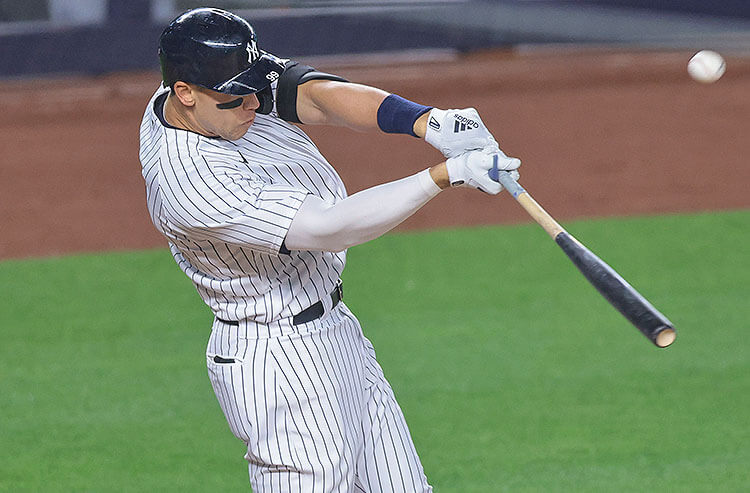