Phillies vs Mariners Picks and Predictions: Nola Racks Up Ks in Road Win

Philadelphia crushed Seattle last night, and with Robbie Ray's regression this season, we're not expecting the reigning Cy Young winner to save the M's this evening. Find out why Aaron Nola should continue to send the home side adrift in our Phillies vs. M

The Philadelphia Phillies and Seattle Mariners clash in an interleague matchup on Tuesday night at T-Mobile Park. This is the second contest in a three-game series with the Phillies hammering the M's 9-0 in the first meeting last night.

Oddsmakers are expecting a close low-scoring game with MLB betting lines opening with the Phillies as slim -125 road favorites with the Over/Under at 7. Here are our best free Phillies vs. Mariners MLB picks and predictions for May 10.

This line opened with the Phillies installed as -125 road favorites with the Over/Under at 7. Early money has come in on Philadelphia, shifting their line to -135. The total is still at 7 and juiced towards the Under in the neighborhood of -125.

Aaron Nola (1-3, 3.38 ERA): Nola is limiting opposing batters to a batting average of .197 and has an impressive 0.87 WHIP through six starts, but giving up the long ball continues to be an issue for him. In his previous start last Thursday, he limited the Mets to three hits and one run through seven innings but gave up his sixth home run of the season.

Robbie Ray (2-3, 4.38 ERA): Ray has had mixed results in his first season with the Mariners, posting a 1.24 WHIP with a .239 OBA in six starts. In his previous outing, the 30-year-old gave up seven hits and four runs in 6 2-3 innings with all of those runs coming in the fourth inning.

The Over is 7-1 in the Phillies last eight games as a favorite. Find more MLB betting trends for Phillies vs. Mariners

Phillies vs Mariners picks and predictions

The Phillies lit up Mariners starter Chris Flexen for nine hits and six runs through the first five innings last night en route to a 9-0 victory. That win improved Philadelphia's record to 13-16 and a tie for third place in the NL East. The Phillies have been impressive at the dish and rank third in the majors with an OPS of .732.

The Mariners are on an ugly skid, having lost seven of their last eight games to fall to 13-17 on the year. Seattle ranks 14th with an OPS of .686 and really misses outfielder Mitch Haniger, who is out with an ankle injury (after dealing with COVID-19 earlier in the season) and led the club with 39 homers last season.

Shortstop J.P. Crawford currently paces the team with a sizzling .340 batting average but is listed as questionable after missing the last two days with back spasms. In their last 10 games, the Mariners have plated just 24 runs, with 14 coming in two of those contests alone.

Veteran right-hander Aaron Nola will take to the mound for the Phillies. After a rough season in 2021, he's looked sharp lately, allowing four runs and striking out 25 batters through 20 innings in his last three starts.

The Mariners respond with lefty Robbie Ray (4.38 ERA) who has taken a big step back after winning the Cy Young Award with the Blue Jays last season. While some regression was expected for Ray — who ranked just 87th in hard-hit rate among qualified starters last season and had an expected ERA of 3.57 (0.73 higher than his actual ERA) — his strikeout numbers are a bit alarming.

Ray had long been a strikeout artist with a percentage above 31% in four of the last five seasons, but that number sits at a career-worst 20.3% this season. His four-seamer and slider (which make up more than 90% of his total pitches) have seen their average velocity drop by more than 2.0 mph.

With the Phillies seemingly having the edge at the plate and the Mariners struggling to put together wins, we'll back the road faves on a short line.

This total is sitting at 7, which seems a tad too low given that neither pitcher has looked that great and the Phillies are seventh in the majors with 4.52 runs per game. Reigning NL MVP Bryce Harper is once again crushing the ball (team-best .509 slugging percentage), while offseason additions Nick Castellanos (slashing .311/.377/.505) and Kyle Schwarber (seven homers) have fortified the lineup.

That said, no lead is safe for the Phillies, with their bullpen continuing to be an issue. Phillies relievers are 25th in the majors with a collective ERA of 4.30 and WHIP of 1.32 which is the exact same ranking they had last season.

Although T-Mobile is a pitcher-friendly park, oddsmakers might be over-estimating that run-suppressing effect with Overs going 18-7-1 in the last 26 games here.

The Mariners were one of the worst teams in the majors when it came to whiffing last season, ranking 26th in the majors in strikeout percentage (24.8%).

Although they've shown improvement at the start of this season, they struck out a whopping 12 times last night including seven times to Phillies starter Ranger Suarez, who has an ugly 16.7% strikeout rate.

On the other hand, Nola has an impressive 31.1% strikeout rate and has racked up at least seven punchouts in his previous three starts. His 68.9 strike percentage ranks sixth in the majors among qualified pitchers and has us loving the Over 6.5 on his strikeouts prop at plus money. 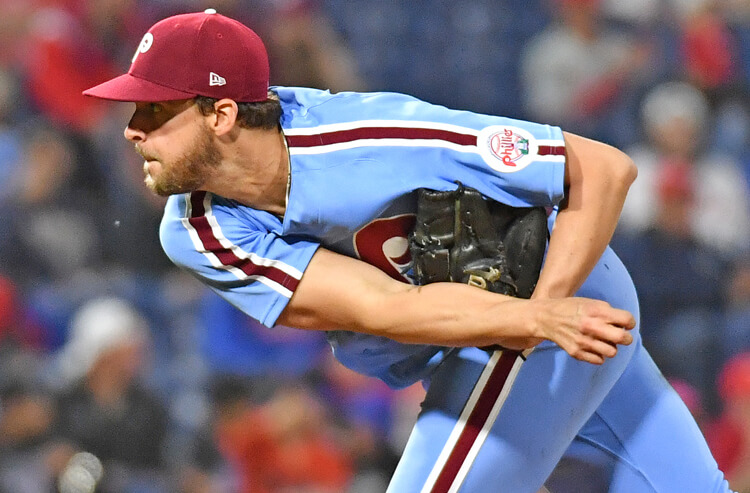 Phillies vs Mariners Picks and Predictions: Nola Racks Up Ks in Road Win
Provided by