Blue Jays vs Yankees Picks and Predictions: Toronto Rebounds From Ugly Week in the Bronx

Last week saw Toronto go just 2-5 with ugly losses scattered throughout its schedule. A mini two-game set in New York will give it the chance to rebound and our MLB betting picks like the Blue Jays to do just that vs. the Yankees.

After not losing a series in April, the Toronto Blue Jays have had a humbling start to May losing consecutive sets to the New York Yankees and the Cleveland Guardians.

Luckily for the Jays, they are getting healthy and will have to chance to quickly put that behind them as they open a mini two-game set against the Yanks tonight in the Bronx. Can Toronto bounce back and give us value as a road dog, or will New York cash as home favorites?

Find out in our free MLB betting picks and predictions for Blue Jays vs. Yankees on Tuesday, May 10.

The Blue Jays opened this American League East matchup as +130 road underdogs and the early money has faded them to +155 depending on the sportsbook. The total hit the board at 7 but was quickly bet up to 7.5. That number is juiced to the Under as of Tuesday afternoon.

Yusei Kikuchi (1-1, 4.35 ERA): After a tough April, Kikuchi is coming off his best start of the season allowing just one run on three hits while striking out seven batters over six innings of work against this same Yankees team back on May 4.

Luis Severino (2-0, 3.75 ERA): Severino has looked like his old self after missing the majority of the last three seasons due to injury. The right-hander has allowed three earned runs or fewer in four of his first five starts of the season.

The Over is 4-0 in the Blue Jays' last four games when facing a right-handed starter and is 4-1 in the Yankees' last five games versus a left-handed starter. Find more MLB betting trends for Blue Jays vs. Yankees

The Blue Jays enter this mini two-game set hoping to bounce back from a week that saw them go just 2-5 overall.

The two biggest problems for the Blue Jays showed up often during that stretch. The Jays still rank dead last in the MLB when it comes to batting average with runners in scoring position at just .187, while the bullpen has faltered a bit, now ranking 22nd in ERA and 23rd in opponent batting average.

Meanwhile, the Yankees enter this game sitting atop the AL East standings at 20-8 but their bats have gone quiet over the last four games, scoring six runs over that stretch.

For the opener of this series, we’ll see Yusei Kikuchi face off against Luis Severino. Kikuchi was having a dreadful start to his 2022 campaign before a somewhat stunning start where he dominated a hot Yankees lineup last time out.

It was stunning because Kikuchi had been battling his control over his first four starts, pitching to a 5.52 ERA and a 1.91 WHIP over that span, going against a Yankees team that ranks fifth in OPS, first in home runs, and generally crushed lefties.

As noted, the Yankees bats have disappeared since then hitting a minuscule .155 over the last four games, despite facing Kikuchi and a sub-par Texas Rangers pitching staff.

Luckily for the Yankees, their pitching staff has been one of the best in baseball, including Severino. The right-hander is creating a lot of soft contact and is pitching to an expected ERA of 2.88. He held the Blue Jays scoreless on two hits over five innings back on April 14.

That said, he has allowed 17 hits and struck out just 12 batters over his last 16 innings of work and now faces a Jays lineup that usually performs well against right-handers and is just itching for a breakout.

This is a tough game to handicap but we’ll lean towards the Blue Jays for a few reasons. These rivals continually play tight games, the Yankees bats’ are in a bit of a slump, and the price we are getting.

The total for this game is intriguing. If not for a late inning collapse by the Blue Jays in the middle game of their last series, these teams should probably be 6-1 to the Under in their first seven meetings. When you consider the Yankees’ pitching combined with their little hitting slump and the Jays' inability to cash runners in, it’s no wonder we got a total this low. But, I’m with the early money here and the move to 7.5 still doesn’t seem like enough.

For starters, while Kikuchi is coming off an excellent start against this same Yankees lineup we’re going to see more from him to think he is trending in the right direction. The lefty is still pitching to an xERA of 5.25 and has been hit consistently hard this season. Despite the Yanks’ slump, this team still ranks third in OPS and first in home runs when facing lefties this season.

On the other side, anyone who watches the Blue Jays regularly knows the offense has been frankly disappointing to this point in the season. But this team is still tied for ninth when it comes to batting average and has hit the second-most home runs with facing righties. Plus, with Teoscar Hernandez back, the depth of this lineup gets much better.

So, expect a bit of a regression to the mean for Kikuchi and the Blue Jays’ lineup. Which means a hard look at the Over.

Unless your name is Gerrit Cole, or I guess Nestor Cortes now, the job of a New York Yankees starter is pretty simple. Pitch five solid innings then let Aaron Boone hand the ball off to one of baseball’s best bullpens.

That is basically what Severino’s role has been. Despite his excellent numbers, he’s pitched more than five innings just once over his five starts this year. And despite not getting a huge amount of strikeouts, the right-hander has upped his pitch count quickly in most starts, averaging nearly 17 pitches an inning.

So, there are two reasons to like this bet. Severino could be pitching well and still not make it past five innings, particularly when you consider that you rarely like giving a team like the Blue Jays a third look at your stuff. Or, the Jays start hitting like we know they can and he lasts five or fewer thanks to damage done. 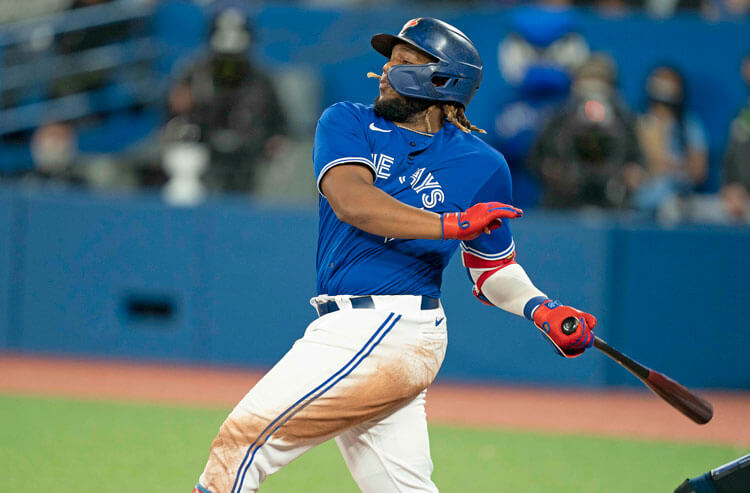 Blue Jays vs Yankees Picks and Predictions: Toronto Rebounds From Ugly Week in the Bronx
Provided by