With a loaded slate of MLB games, we're looking at a variety of appealing player props tonight. Chief among them is one of the lone bright spots for the Red Sox: Garrett Whitlock. We like the righty to cruise past his strikeouts total tonight in Atlanta. 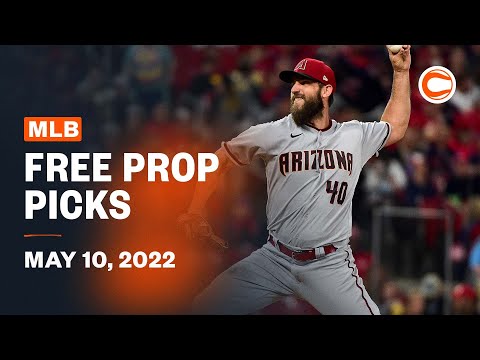 It’s another day loaded with action on the diamond as there are 16 games on the MLB slate, which means there is no shortage of baseball betting options in the player prop market.

Today, we focus on arguably the lone bright spot for the Red Sox’s season to date, great value in an overlooked hitter’s total bases prop, and answer the question of how Madison Bumgarner will respond in his first start since hand massage-gate.

Check out our MLB player prop picks for Tuesday, May 10, as we bank on some of baseball’s best to do their thing.

MLB props for May 10

At 10-19 and sitting in the American League East basement — yes, even behind the Baltimore Orioles — a lot of things have obviously not gone as planned for the Boston Red Sox through the first month of the MLB season. But one bright spot has been Garrett Whitlock, and he’ll be on the mound tonight against the Atlanta Braves.

The 25-year-old right-hander began the year as the Red Sox’s long reliever. But after injuries plagued the Red Sox’s rotation and he began the season allowing just one run on four hits while striking out 11 in 9 2-3 innings of relief work, Whitlock quickly moved into the starting rotation.

And he has carried that strong play into his first three starts. Whitlock has allowed just two earned runs on seven hits while striking out 18 in 12 innings. Notice anything? His strikeout numbers are off the charts.

He ranks in the 93rd percentile when it comes to strikeout rate and is punching out 12 batters per nine innings so far this season and he’ll get a good chance to keep racking up the Ks against the Braves. Atlanta’s 9.27 strikeouts per game are the third-worst in baseball while ranking 23rd in strikeout rate when facing right-handed pitchers.

Whitlock has recorded seven or more strikeouts in two of his first three starts and he is just getting fully stretched out. Bet the Over 5.5 at great plus-money value.

It feels like sportsbooks still haven’t figured out that Tampa Bay Rays outfielder Manuel Margot is the hottest hitter in baseball. He’ll look to stay hot and we’ll look to take advantage when the Rays continue their series with the Los Angeles Angels on Tuesday night.

Margot is in the midst of a nine-game hitting streak, where he is batting an incredible .484 with a 1.418 OPS. That includes notching six extra-base hits. He’ll get a chance to keep that streak alive when he faces off against Angels’ lefty Reid Detmers in tonight’s matchup.

Detmers is one of the Angels’ top prospects and has basically looked like a rookie over his first five starts in 2022, showing flashes of great potential mixed with typical rookie struggles. That has equated to an expected ERA of 4.27 while giving up a .264 expected batting average to opponents. Translation: nothing Margot shouldn’t be able to handle, particularly considering he is hitting .381 when facing southpaws this season.

What all this means is that it’s somewhat surprising we can get plus money like this on Margot’s total bases prop. A number he has gone Over seven times during his nine-game hitting streak.

Please note that Margot left last night’s game in the sixth inning with an apparent injury. Keep an eye on his status heading towards first pitch, but this is a tremendous value if he’s good to go.

I am expecting a whole bunch of, “An Over on a Madison Bumgarner strikeout prop? What an idiot,” for this play, but hear me out.

Bumgarner makes his first start for the Arizona Diamondbacks since his awkward massage and subsequently getting tossed against at the hands of umpire Dan Bellino last week. And the start is once again against the Miami Marlins.

MadBum obviously isn’t the pitcher he used to be, but he is having an interesting start to the season. The lefty has allowed only four earned runs over his first 24 innings and has an expected ERA of 3.53 while limiting opponents to an expected batting average of .226.

Bumgarner is doing it by mixing his speeds and locating well to create a lot of soft contact, not with strikeouts. He has punched out 15 in 24 innings, resulting in the lowest strikeout rate of his career, and has gone Over 4.5 strikeouts just once in the five starts where he wasn’t ejected.

That said, three of those starts came against teams that rank first, fourth and seventh when it comes to strikeout rates when facing left-handed pitching. The Marlins are the exact opposite of that. Miami ranks dead last in K rate when facing southpaws this season (29.7 %) while ranking 20th in strikeouts per game overall.

On top of that, in two starts against the Marlins last season he recorded 16 strikeouts in 13 innings pitched. I’m betting the Fish and their swing-happy ways help MadBum get Over his strikeout total today, making the plus-money a solid value.