Liverpool and Manchester City have made for a dramatic Premier League title race, but while the Reds should secure one last victory Sunday, their title hopes will likely be put to bed by three final City points. Read more in our EPL betting picks below.

On Sunday, we see the final slate of Premier League games with all still to play for. Liverpool still have dreams of winning the Premier League title as they welcome Wolves to Anfield, but in reality, that will be decided in Manchester City's fixture with Aston Villa.

Jurgen Klopp needs his Liverpool team to beat Wolves and hold up their end of the deal and hope that results go their way elsewhere. Don’t miss our Liverpool vs. Wolves tips and predictions to see how it all plays out.

Temperatures will be in the low 60s when this game kicks off at 4 p.m. local time on Sunday, and Liverpool fans will be hoping the result is less miserable than the wet and depressing weather.

We’re 37 games into the Premier League and as we head into this final Sunday slate, everything is still up for grabs, from a relegation and Champions League spot all the way through to the Premier League title itself. That’s where Liverpool find themselves as we prepare for this, their 38th Premier League game of the season. With the greatest respect to Wolves, this match isn’t about them. It’s all about Liverpool and their battle with Man City.

This season’s title race between Liverpool and Man City has been sensational, with both teams trading blows throughout the season, with a real rivalry developing as the season has progressed. This is arguably the best title race in over a decade and now we go into the final day of the Premier League season still unsure who’ll win.

City are one point ahead and have a home game against Aston Villa, now managed by Liverpool icon Steven Gerrard. Could the Kop’s former hero do them a favor and take points off City? I can’t see that myself but that doesn’t change Liverpool’s task, they simply must beat Wolves here to keep their dreams alive — and they will.

Klopp has some injury doubts around key players with Mohamed Salah, Virgil van Dijk, and Fabinho all on the injury table. With a huge Champions League final against Real Madrid next Saturday, it’s unlikely that Klopp will want to risk players if it could potentially backfire and mean they miss that game, which leaves the manager in a tricky position.

Virgil van Dijk should remain on the sidelines meaning Joel Matip and Ibrahima Konate will sit at the heart of the defense in Liverpool’s 4-3-3. They’ll be flanked as always by Trent Alexander-Arnold and Andrew Robertson with the magnificent Alisson behind them in goal. The midfield three is likely to be made of Thiago, Jordan Henderson, and Naby Keita, again with Klopp likely to play safe and not risk Fabinho. That midfield three is more than good enough to win this game without the need to risk the Brazilian.

The front three will almost certainly feature Sadio Mane and Luis Diaz, and I’d imagine Mohamed Salah. In an ideal world, Klopp would love to rest the Egyptian but he’s such a key part of that attacking trident that he’ll surely see some game time, even if it’s from the bench.

Wolves are currently eighth and could be overtaken by Leicester and even Brighton depending on results, but regardless of that, it’s been a very impressive season and Bruno Lage will be very pleased with how it’s gone. Next season, I’m expecting to see progression but for now, they face a great Liverpool team with a number of injuries in defense, including Romain Saiss and the talented Maximilian Kilman, who’s been great this season.

Despite those injuries, Lage will continue to line his team up in a 3-4-2-1 with the three central defenders flanked by wingbacks Rayan Ait-Nouri and Chiquinho, who’ll be tasked with getting forward and joining attacks, while also slotting back in and protecting the heart of the defense from Liverpool’s attacking fullbacks. Wolves' attack will include Raul Jimenez and Hwang Hee-Chan and as always, the fantastic Portuguese duo of Ruben Neves and Joao Moutinho will play in central midfield.

Wolves are a better team than many think and at their best are capable of causing problems for any of the Premier League’s best teams. Despite missing some defensive players I’m expected them to stay tight and compact and really frustrate Liverpool.

However, the Reds are too good and too focused on the Premier League title to drop points at this juncture. I can’t really recommend betting on either the draw or a Wolves win, but at odds of -650, I wouldn’t personally wager on Liverpool winning either, as I think the actual odds should be closer to -400. Despite that, it’s the most likely result, so Liverpool is the right side.

The bookies are certain we’re going to see lots of goals at Anfield on Sunday. That’s a view which makes some sense given the free-scoring nature of this Liverpool team and the fact they’ll be going all out to win, however, I think the better value is on Under 2.5 goals at a massive +184.

Wolves play very conservatively on the road and focus on limiting the opposition's chances, trying to escape with either a draw or stealing a goal and getting a win. Under 2.5 goals has landed in five of their past six away games and an amazing 77.8% of all of their road games all season.

In fact, just four times this season have the Wolves gone Over 2.5 goals away from Molineux. For that reason, back the Under. This won’t be an easy win for Liverpool.

Anthony Taylor will be officiating this game and in the 27 Premier League fixtures that he’s taken charge of this season, we’ve seen 100 yellow cards, an average of 3.7 per game in addition to five red cards. He’s a talented red and is very good at protecting some of the league’s best players. In the four Liverpool games he’s officiated season, he’s dished out 10 of his yellow cards and two red cards.

That might mean trouble for Ruben Neves. The Portuguese midfielder is arguably Wolves' best player but he’s also their most booked player, finding his name in the referee’s book nine teams this season.

In a toughly-contested midfield battle against Liverpool, as well as having to drop back and protect the team against the likes of Mane and Salah, I think there’s a real chance we see him booked. At +360, it’s well worth a wager and it looks like the best value bet on the market. 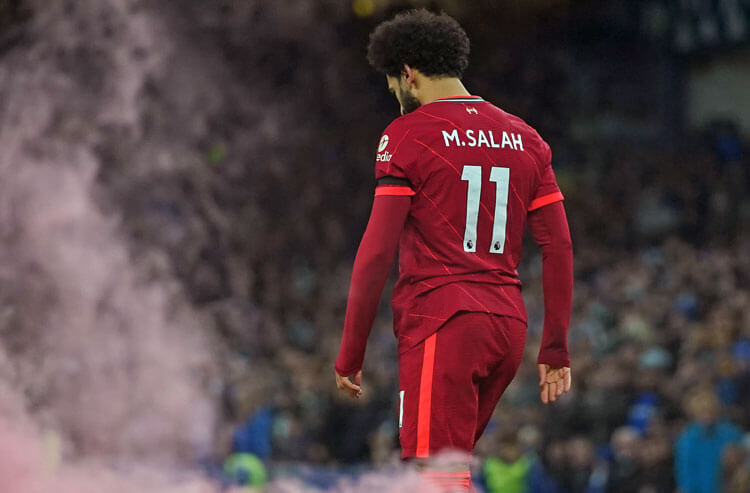 Tottenham vs Burnley Picks and Predictions: Spurs' Super Trio Too Much for Burnley
Sam Farley | May 13, 2022