Manchester City can put an end to what's been a tight and dramatic EPL title race with three points on Sunday. While not the dramatic outcome, we're backing them to slam the door on another title — find out why in our EPL betting picks below.

Sunday sees the final round of this season’s Premier League and it’s all come down to the last day. There is still so much to play for with the title race, Champions League qualification and relegation all still undecided.

Man City face Aston Villa with a one-point lead in the Premier League table and will reclaim their trophy if they seal the victory.

Can Aston Villa pull off a shock win and hand the Premier League title to Liverpool? Read our Man City vs. Aston Villa tips and predictions to find out.

It’ll be 65 degrees when this game kicks off at 4 p.m. local time on Sunday, but the weather in Manchester will be wet and miserable.

It’s not often that everything boils down to the final day but that sums up just how good this Premier League season has been. As we head into Sunday’s slate of games we still don’t know if it’ll be Burnley or Leeds joining Norwich and Watford in the Championship next year, or whether it’ll be Spurs or Arsenal finishing fourth and qualifying for the Champions League.

Most importantly, the Premier League title itself is still up for grabs with Manchester City one point ahead of Liverpool.

On Sunday, City welcome Aston Villa to Etihad Stadium knowing they’ll retain their trophy if they can win and secure those valuable three points. This game is riddled with narratives, with Aston Villa manager Steven Gerrard, himself a Liverpool icon, being able to hand the title to his former club if his current one secures a win.

Unfortunately for Gerrard and the red half of Merseyside, it’s very hard to see anything but a Man City win. The bookies' -600 odds imply an 85.7% chance that we see City win but in reality, it's probably even higher than that.

Pep Guardiola will send out his team in their usual 4-3-3 formation and there are still some doubts over exactly who we’ll see in the lineup. City have had defensive issues with Ruben Dias, John Stones, and Kyle Walker all injured but Walker and Stones trained this week and are expected with Stones likely starting alongside Aymeric Laporte at CB. We’re less sure on Walker’s status but given how different the team is when he's not in the lineup, I’m certain Guardiola will try and patch him up to play rightback with Joao Cancelo moved back to leftback.

The midfield three of Kevin De Bruyne, Rodri, and Bernardo Silva is set and arguably the best on the planet right now. Then, it’s the front three and the same ‘Pep roulette’ that we’ve grown used to. Raheem Sterling is in great form and is the one you can be certain will start. Jack Grealish will be desperate to play his former team but he could miss out, as should Riyad Mahrez who missed another penalty last Sunday, meaning it’ll be Gabriel Jesus and Phil Foden alongside Sterling.

Steven Gerrard’s Aston Villa will be in a 4-3-1-2 with Ollie Watkins and Danny Ings both starting up top as the Villains look to test City’s injury-hit defense. Phillipe Coutinho will be in the ten role behind them with Villa’s three key players behind him being John McGinn, Douglas Luiz, and Jacob Ramsey.

That midfield three is integral to any Villa (and Liverpool) hopes here and they need to subdue City’s most creative talents while also supporting their own attacking players. That’s going to be a very tough ask, and they’ll need to make sure they protect Calum Chambers and Tyrone Mings in Villa’s backline, who haven’t been in great form.

While there’s still hope in Liverpool, I just can’t see anything but a City win. The narrative around Steven Gerrard helping out his former team is overblown. This Villa team have some talented players but they’re 14th in the Premier League for a reason, having not won any of their past three games. They also played last on Thursday, whereas Man City should be fully-rested.

There have been Over 2.5 goals in seven of the last eight meetings between these teams in all competitions. Not only that, but City themselves have scored at least two goals in each of their past eight games in the Premier League.

Throughout this season, we’ve seen Over 2.5 goals in 55.6% of Aston Villa’s games on the road with the Over landing in four of their past five away games. We know all about Man City’s dominance and they’ve had Over 2.5 goals in 66.7% of games on their own turg. Given the importance of this game, it’s hard to envision this not going Over.

I’ll be honest with you, there is very little betting value to be had on this game. It’s one the bookmakers have studied extensively, and given the gulf in class between the teams, any wager that backs City is very short. One play that does look attractive though is for Raheem Sterling to score and for Man City to win the game, available at +175 at DraftKings.

Sterling has had a mixed season. He started slow, perhaps suffering a hangover from the disappointment of losing the Euro 2020 final to Italy, but in the latter half of the season, he’s shown the brilliance that we know he’s capable of.

He’s scored 13 goals in the Premier League this season, a good return considering he’s played 29 games, with six of those from the bench. He quite often scores in streaks, netting in consecutive games. We're in luck as he's been in sensational form of late, netting three goals and an assist over City's past two games.

He’s at the peak of his powers, making this worth a beta this number.

Pick: Manchester City to win and Raheem Sterling to score (+175 at DraftKings) 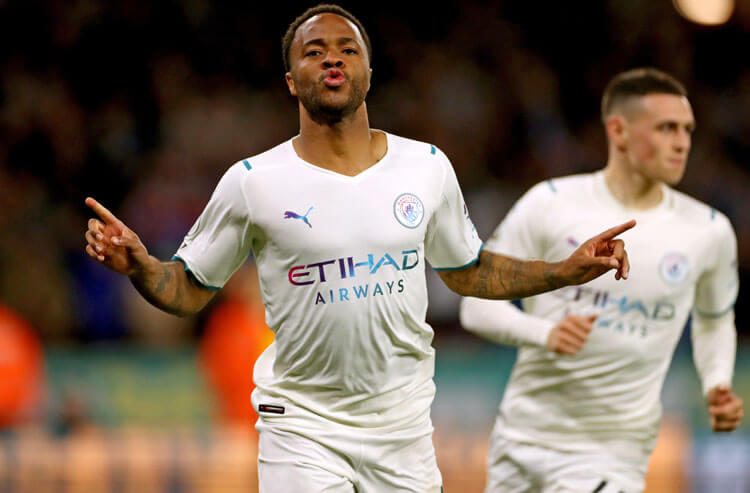 Tottenham vs Burnley Picks and Predictions: Spurs' Super Trio Too Much for Burnley
Sam Farley | May 13, 2022
About Us
Contact Us
Careers
Our Team
Brand
Testimonials