With Erling Halaand in place, Man City are the EPL title odds favorite as they look for their third title in a row. Liverpool join City as always, but how does the rest of the league shape up? Get the full 2022-23 EPL odds below.

A dramatic and hard-fought title race came down to the final 10 minutes of the Premier League season, ending with the familiar sight of Manchester City being crowned champions.

Pep Guardiola's team came back from behind on the final day to win their fourth title in five years, just edging out Liverpool for the league. Those two will no doubt again challenge each other next season, as they are in the EPL title odds for 2022-23, but with one of the world's best strikers arriving in England, one of these two has a considerable edge early.

Let's find out what the books think with an early look at Premier League odds, as the EPL gets set to return after a weekend of postponed fixtures.

Live odds courtesy of DraftKings Sportsbook. Be sure to compare EPL odds before placing your bets.

Favorite to win the Premier League

With Europe's deepest squad and best coach, Man City would have surely been the favorite by simply returning the same squad. Instead, they added arguably the world's best No. 9 in Erling Halaand, giving a clinical squad a proper striker, as well as other typically sensible additions.

City's new look has gotten off to a fine start, with Halaand already on 11 goals after seven Premier League games. Though City have already dropped points twice, in two draws, they remain a short Premier League favorite.

Like City, Liverpool are rightfully among the favorites to start the year, especially with a replacement for Sadio Mane already in place with the signing of Darwin Nunez.

It hasn't been an easy start for the Reds as they fell behind twice to Fulham in what finished as a 2-2 draw, then saw Nunez sent off in a 1-1 draw with Crystal Palace before losing to Man United in an underwhelming derby. Those early frustrations were directed at Bournemouth, who fell to Liverpool, 9-0 but lethargic performances continued in a 0-0 draw in the Merseyside derby.

Top of the league and only just suffering their first defeat of the season, Arsenal have moved into the Top 3 on the odds board amid an impressive start. New signing Gabriel Jesus has powered the Gunners, who have a trio of strong games behind them already. Top 4 was the expectation ahead of this season, but can Arsenal surprise and challenge for the title?

EPL futures odds are constantly adjusted throughout the offseason due to player transfers and injuries. Once the season begins, title odds will change as teams win and lose games and as more players get hurt or suspended. Sportsbooks will also adjust EPL odds based on handle and liability to certain teams.

This means that on a $100 bet, you'll stand to win $350 if Manchester City wins the EPL Championship. If it's close to the end of the competition, or a club has been particularly dominant, you might see them with a minus sign (-) ahead of their odds.

This means that you would need to bet $500 to win just $100 on a Liverpool championship.

Above we have posted the American odds for EPL. However, these are easy to convert to decimal odds or fractional odds with our odds converter tool.

Manchester City defended their title, edging out Liverpool by one point.

Under its current construction, Manchester United have won nearly three times more than the next closest team, at 13. Expanding it to include the previous structure, Man United still hold the most first division titles at 20.

Since its new formation in 1992, the Premier League has seen seven different winners. 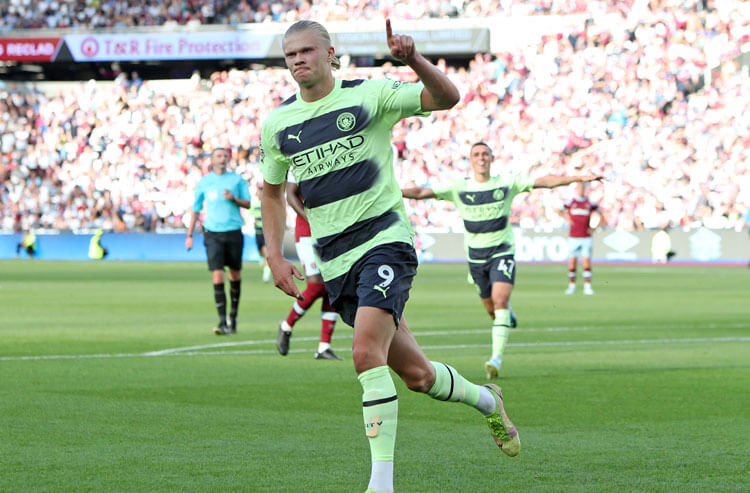