Euro favorites France will get a tough test early against Germany. Can France's depth of attackers break down Germany and beat Europe's best goalkeeper in Manuel Neuer? Find out in our France vs. Germany tips and predictions.

Euro 2020 betting is underway and the Group of Death begins play on Tuesday, June 15 with a pair of terrific matchups including a battle between European soccer rivals France and Germany.

France are +160 favorites for this Group F matchup, while Germany comes back as +180 underdogs with the draw installed at +220.

Here are our best free France vs. Germany tips and predictions for Euro 2020 action on June 15.

It's expected to be a warm evening in Munich, Germany with temperatures topping out at 82 degrees Fahrenheit.

France enters Euro 2020 as the +450 favorites to win the tournament and claim a World Cup and European Championship double for the second time in their nation's history. France are incredibly talented at every level, possessing a highly skilled and creative group of attackers, brilliant defensive play, and fantastic chemistry.

Les Bleus are also in terrific form at the moment with five wins and a draw in their last six matches. Germany are currently just No. 12 in the FIFA World Rankings and while they are fourth on the Euro 2020 odds board at +700, they haven't been in great form.

Not only were they eliminated in the group stage of the 2018 World Cup but they were hammered 6-0 by Spain in November of last year, before drawing with Denmark and losing 2-1 to North Macedonia in March.

Despite those recent setbacks, this is still a very talented Germany side that is absolutely loaded with experience, while chemistry should not be an issue with eight Bayern Munich players in the squad. The difference-maker could be the German home-field advantage, with all three of their Group F matchups taking place at Allianz Arena in Munich.

Although France defeated Germany 2-1 the last time they faced off, in 2018 in the UEFA Nations League, the two previous meetings resulted in draws, with both of those contests taking place in Germany.

Look for a strong and focused performance from Germany in Joachim Löw's swan song as manager, but they might not be good enough to beat France outright. Expect a tight game and bet the draw at +220.

France certainly have plenty of firepower up front but at their core is a strong defensive identity. Didier Deschamps is a conservative manager that always makes sure that his squad is well-drilled and disciplined in the back and midfield.

That could spell trouble for Germany's front line, with Leroy Sane only recently ending a 17-match scoring drought with Bayern Munich and Timo Werner struggling to find form after scoring just six goals in 35 matches for Chelsea.

Germany found the back of the net seven times in their most recent match versus Latvia, but they managed only one goal in each of their previous three international contests against Denmark, North Macedonia, and Romania. It will be even tougher for them to find space against France's athletic and physical defenders.

While Germany has been transitioning to a more expansive style, Löw may be inclined to return to a more possession-based game-plan to neutralize dangerous French attackers like Kylian Mbappe and Karim Benzema.

Germany also has one of the greatest goalkeepers in history in Manuel Neuer. He just earned his 100th cap and has 43 international clean sheets to his name, and just won his record fifth Best European Goalkeeper Award despite turning 35 years old.

Expect a tight defensive match, especially in the early going, and bet on neither team to score before the 31-minute mark. 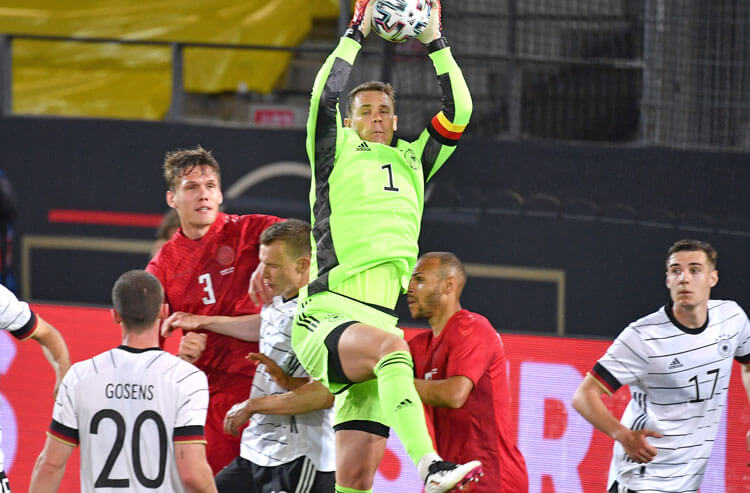 France vs Germany Euro 2020 Tips and Predictions: Group of Death Begins
Provided by