Hungary vs Portugal Euro 2020 Tips and Predictions: The Champs Are Here

Defending champs Portugal will begin their title defense in Budapest against Hungary. Will the two be able to replicate a 3-3 thriller from the last tournament? Find out in our Hungary vs. Portugal tips and predictions.

Euro 2020 betting is underway and Group F begins play on Tuesday, June 15, with the first game on the slate a matchup between defending European champions Portugal and Hungary.

Both nations had successful Euro 2016 tournaments and have been in good form lately, but will find it difficult to duplicate that success as they play in the Group of Death this time around.

Portugal is a big -223 favorite for this contest, while Hungary comes back at +650 with the draw installed at +333.

Here are our best free Hungary vs. Portugal tips and predictions for June 15.

It's expected to be a clear and sunny day in Budapest with temperatures topping out in the high 70s.

Hungary advanced to the Round of 16 at Euro 2016 and they'll have the benefit of opening this tournament in front of a home crowd at Puskás Aréna in Budapest. But after a brutal draw placed them in the Group of Death against Portugal, France, and Germany, they've been given odds of +350 to even qualify after the group stage.

These two nations actually clashed at the previous tournament in 2016, with that match ending in a 3-3 draw. Since then Portugal and Hungary have faced off twice, with Portugal winning by scores of 3-0 and 1-0.

The Magyars will be without Dominik Szoboszlai who has been ruled out for the tourney with a groin injury. The 20-year-old prodigy was crucial to their attack and in his absence, midfielder Adam Nagy and forward Adam Szalai will carry an even heavier burden.

The two Adams typically play well internationally but have been out of form with their domestic clubs, which is bad news as they take on such a massively talented Portuguese backline that conceded just six goals in eight qualifying games.

Hungary will have to be very stout defensively with their 3-5-2 system if they want to stay competitive. With standout Willi Orban anchoring the middle of their defense, they should be able to do a respectable job of controlling possession and limiting Portugal's opportunities.

However, that will likely come at the cost of their own bravery when attacking. Expect a lower-scoring game to kick off Group F play and take the Under.

It won't be easy for any team in this tourney to pierce the Magyars well-structured defensive unit, but Portugal is well equipped to do so. Of course, Cristiano Ronaldo is the big name, and even at 36 years old he's still one of the best forwards in the world, scoring 11 goals in eight qualifying games last year.

But even beyond Ronaldo, they are loaded with in-form talent up front. André Silva was the second-highest goal-scorer in the Bundesliga, Diogo Jota battled through injuries to display his prowess for a highly competitive Liverpool club, and 21-year-old João Félix looks like a future superstar.

With Bruno Fernandes linking up from midfield, Portugal is an offensive threat from the beginning of the match until the final whistle. During qualifiers, Portugal scored in the first half in six of eight matches.

Meanwhile, Hungary conceded in the first half in five of eight Euro Qualifiers. That gives plenty of value in betting Portugal to have the lead at the half and win the match. 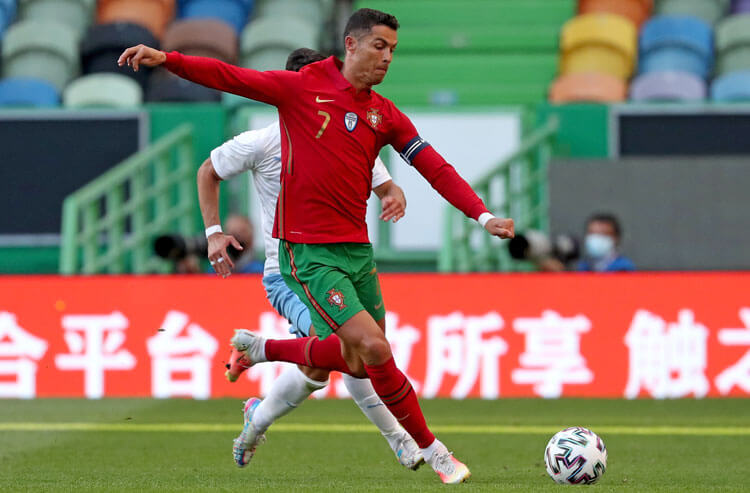 Hungary vs Portugal Euro 2020 Tips and Predictions: The Champs Are Here
Provided by