We're back at it this weekend with another edition of our NFL touchdown prop picks, and we've got some great high-return selections to find the end zone in Week 12. Check out this week's picks to see why Jeff Wilson and others are worth backing. 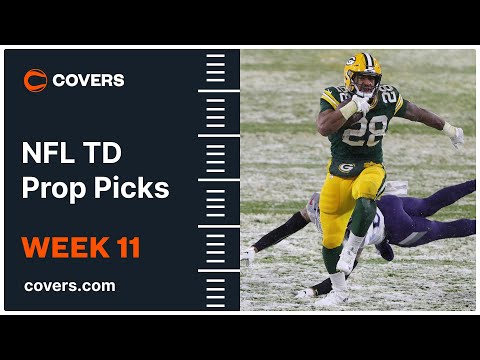 Week 11 has us looking at two possible running backs with expanding roles and a double-dip on the New Orleans tight end depth chart.

Green Bay’s Aaron Jones is expecting to miss up to two weeks with a mild ACL sprain. A.J. Dillon’s role had been growing weekly and now the bowling ball of a running back tops the depth chart ahead of the Packers' matchup with the Vikings.

Dillon is averaging 4.3 yards per carry on the season and popped two TDs last week with the bigger role. He had 10 red-zone rushes versus the Seahawks last week and gets a plus matchup this week, as well.

The Vikings' defense sits 31st in EPA/rush and ranks just ahead of the Chargers’ porous rush defense. Minnesota has a solid pass defense and ranks sixth in defensive success rate. The Packers could be pounding the ball Sunday as Aaron Rodgers looked a little rusty last week and was limited in practice on Thursday as well.

Jones’ TD price closed at -110 last week. Dillon’s TD price is falling hard, but bet365 is still posting -105, which is a big difference as BetMGM has it at -200. This price won’t be around all weekend and is a 1.55-unit play for us. We’ve been big Dillon fans for the last couple of months and now the big back gets to shine.

Since Trevor Siemian has taken over the starting duties in New Orleans, tight end Adam Trautman has seen more passes than any other player and could see plenty of more action with Alvin Kamara on the wrong side of questionable heading into the Week 11 matchup versus the Eagles and their generous TE defense.

The Eagles allow 0.8 TDs to opposing tight ends and 7.5 receptions for 73 yards. All three of those marks are the highest in the league.

Trautman has seen at least six targets in each of his last three games and has hauled in nine passes over the last two games. He sits second on the team in red-zone targets on the season and will look to continue the TE-scoring trend versus the Eagles.

This may be cheating, but we're going back to the Saints’ tight end depth chart for our longshot TD prop of the week that comes in at a robust +1,200 where some other books have it at +550.

The Eagles gave up two tight-end TDs to the Chargers two games ago and neither of those pass-catchers was Jared Cook. Donald Parham (+490) and Stephen Anderson (+700) walked away with a score each in that game. Combined, those two have just 20 grabs on the year.

It's not like Johnson isn't a part of the offense, either. He has three TDs on the season and had three targets last week for 36 yards and two catches. He's also averaged over 10 passing snaps per game since Week 7.

We hate ourselves every week we see a goalline offense use play-action and hit their No. 3 TE, who is usually wide open it seems. Well, this is the week we get the last laugh. The matchup is great, as the Eagles are the worst team at defending opposing TEs in football, the price is right and is very much +EV. Let’s do it, Juwan. That’s 0.35 units from us to win 4.2 units.

The 49ers enter their Week 11 matchup versus the Jaguars as 6.5-point favorites. Running back Jeff Wilson took 10 of the team’s 37 running-back carries last week but could be in for a bigger role this Sunday with Elijah Mitchell dealing with a broken finger.

Mitchell missed practice Thursday and is a game-time decision for a San Francisco team that runs the ball at a near-Top-10 rate. Getting ahead of a possible Mitchell-less backfield isn’t easy, but BetMGM is still offering a Wilson TD at +190 while most other books have it as OTB. Bet365 has it a +125 but both books are still posting Mitchell TD prices around -110.

The 49ers love to run the ball on the road and have a 66 percent rushing TD percentage when traveling this year. The Jaguars allow 1.2 rushing TDs per game, which is a bottom-five mark in the league. Wilson could see 20 carries if Mitchell is out, which would make getting on this +190 TD price a huge discount, as it will likely move to even money or worse if Mitchell is ruled out. That’s a 1.1-unit play for us to win 2.1 units. 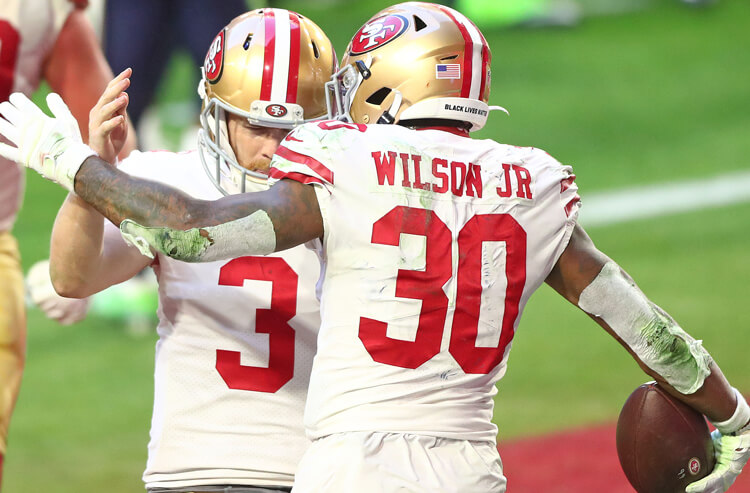 NFL Next Head Coach Odds: Hottest Commodity Off the Board
Kyle LaRusic | Jan 31, 2023