The Minnesota Vikings, fresh off their bye week, travel to Lambeau Field to take on the NFC North leaders the 5-1 Green Bay Packers for the second NFL betting meeting between these teams this year. Both teams’ top running backs missed their previous game but there is optimism that Dalvin Cook and Aaron Jones can suit up.

NFL odds saw Green Bay open as a touchdown favorite but that number is trending down and has come off the seven points on many books. The total has dropped a full point to 54.5 after opening at 55.5.

Here are our NFL free picks and predictions for Vikings vs Packers on November 1 (1:00 p.m. ET).

The forecast for Lambeau Field is calling for temperatures in the low 30s with wind gusts reaching 40 mph and blowing NW Sunday afternoon. Be sure to monitor the gametime conditions with our NFL weather info.

The Vikings are 6-1 ATS in their last seven games after allowing more than 30 points in their previous game. Find more NFL betting trends for Vikings vs. Packers.

The Packers got back to their winning ways last week as they dismantled the Houston Texans 35-20 as 2.5-point favorites. The ATS win pushes Green Bay’s season record to 5-1 ATS on the year, which includes a 43-34 win versus these Vikings back in Week 1.

Green Bay has covered in four of the last five matchups but hasn’t been more than a six-point favorite against Minnesota in over five years. The Vikings may have a 1-5 SU record but they are 3-1 ATS as an underdog this year with covers against Seattle, Houston and Tennessee.

With an extra week of rest, the Vikings are hoping (and likely) to get RB Dalvin Cook back in the lineup. Cook, who is averaging 97.8 yards per game, missed Week 6 and Minnesota ran for just 32 yards without him. If the Vikings can manage not to fall behind early and keep their running game pounding, we like the points in this cold divisional game.

Minnesota will be without its best defensive lineman in Yannick Ngakoue as he was dealt to Baltimore last week. In Week 6 with Ngakoue, the Vikes’ defense allowed 40 points to the Falcons, who put up over 460 yards of offense. It has been a tough year for the Vikings defense as they have allowed 27 or more points in each game this year and sit 30th in the league in points allowed per game at 32. Minnesota is 2-1 O/U in totals of 50 or more points this year and missed the one game by a single point.

Green Bay already hung 43 points on a healthier Minnesota team in Week 1 while Aaron Rodgers’ offense is scoring the second-most points per game at 32.8. Both defenses sit in the Bottom 10 in yards per play, but our only worry with this Over is the weather and the wind, which is expected to be 16 mph. But with how well both teams run the ball, which sets up the play-action, the week’s highest total of 54.5 is not a daunting number.

Coming off his best game of the year, Green Bay WR Davante Adams caught 13 balls for 196 yards and two TDs against the Texans. Adams has already seen the 2020 Vikings defense and the WR dropped a similar line of 14/156/2 back in Week 1. The Vikings are giving up over 200 yards to opposing WRs this year, which is the fourth-highest mark in the league.

With Rodgers back to himself after Week 5’s hiccup, outside of his running backs, there isn’t a lot of talent to throw to other than Adams, as he saw 16 of the 21 WR targets last week. We are loading up on Adams in what could be a shootout at Lambeau. 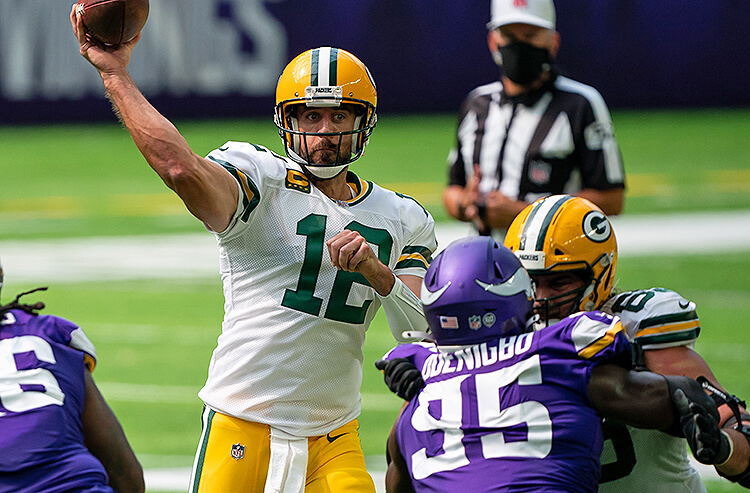 Vikings vs Packers Week 8 picks and predictions
Provided by