As the Saints come marching in without Sean Payton for the first time in forever, they'll need to establish a pecking order in their nebulous run game within the harsh confines of Lambeau. Our NFL betting picks see a low-scoring Packers win as a result.

Two familiar foes do battle on Friday night as the New Orleans Saints travel to Green Bay to square off with the Packers in NFL preseason action. The Saints are trying to move on with a new coach at the helm, while the Packers seek answers to questions surrounding their offense after the offseason departure of wide receiver Davante Adams.

While neither Jameis Winston nor Aaron Rodgers will take the field, there are plenty of key players to watch out for in this contest. Let’s break down the matchup in our New Orleans Saints vs Green Bay Packers NFL picks and predictions for Friday, August 19.

Green Bay opened at -3.0 favorite at most books, and has mostly stayed put, the total opened in the 38-39.5 range and can mostly be had at 38.5 as of Friday morning.

Under is 8-3 in Packers' last 11 games on grass. Find more NFL betting trends for Saints vs. Packers.

Saints vs Packers picks and predictions

For the first time in 17 years, Sean Payton is not leading the Saints into the season. Instead, former defensive coordinator Dennis Allen will look to get his first preseason win with the club — and just his fifth in 14 preseason games as a head coach — when he leads the team into Lambeau Field on Friday night.

Starting quarterback Jameis Winston will not play, Allen informed the media on Wednesday, despite having taken many of the first-team reps in practice this weekend.

In his place again will be Andy Dalton, who is quite experienced and looked solid last weekend. Despite running just 10 plays last weekend, he led New Orleans’ sole touchdown drive on the opening series, completing all five of his passes and culminating with a touchdown pass to running back Dwayne Washington. Ian Book saw the rest of the action, but was unable to guide them back to the endzone.

New Orleans will likely run the ball again this weekend like they did against Houston, with four running backs vying for the spot behind Alvin Kamara and Mark Ingram. The group of Tony Jones Jr, Devine Ozigbo, Abram Smith, and Washington all saw between seven and nine carries against the Texans, but only Smith performed well in his chances. The undrafted rookie out of Baylor will hope to repeat that performance and solidify a roster spot.

The numbers for Jordan Love don’t look that favorable from their opening preseason game against the 49ers, but numbers don’t tell the entire story. The third-year quarterback threw three interceptions, sure — but one of them was a very catchable ball that got dropped for a pick, and another was a freak play where a defender wrestled the ball out of a receiver’s hands as they went to the ground. Even the third one could be excused a bit, as Aaron Rodgers said two receivers ran incorrect routes.

Was he great? No, not particularly. But Love did show signs of promise, as the former first-round pick threw a pair of 33-yard touchdown passes and showed some athleticism with his legs. After playing the first half last week, he’s expected to go three quarters against the Saints. He will be encouraged by what many around the franchise are calling his best practice in a scrimmage against the Saints.

The players he’s targeting are licking their wounds a bit, following some harsh words from Rodgers. He didn’t hold back, ripping into them on Tuesday for their lack of focus and productivity and their culpability for the interceptions.

However, an early meeting between the quarterbacks and receivers on Wednesday morning paid dividends later that day in the scrimmage, especially for seventh-round pick Samori Toure. He’s been impressing many around the team and caught one of Love’s two touchdowns against the 49ers.

It’s a tough ask to replace the productivity of a player like Davante Adams, and someone in the Packers’ young receiving corps has to step up. Veteran Randall Cobb will not play in this game, and Allen Lazard may see limited action. Regardless, the Packers have a trio of rookies who are looking to impress, and Love seems to be feeling confident at the moment.

It’s hard for me to pick the visitors given how poor the offense looked on the ground last week against a Texans defense that gave up the second-most rushing yards in the NFL last season. While it’s preseason, it’s still Lambeau Field — and Book showed nothing last week that makes me believe he’s going to go into that environment and perform well enough to win.

Green Bay’s offense posted 21 points against the 49ers last weekend, but it should’ve been more. The interception off a dropped pass came in the red zone, costing them at least a shot at a field goal. That said, with the majority of their starters not going, they still posted a solid number.

The Saints’ defense stepped up with three interceptions off Houston’s quarterbacks. That’s nothing new for New Orleans, whose 18 picks last year were tied with the Packers for the sixth-most in the league. However, only managing 13 points against Houston is a real concern for those looking to see points in this game.

The Over has hit in 13 of the last 16 games between these two franchises — but this is preseason, and you’ve got two ball-hawking defenses facing a pair of offenses with serious question marks in the passing game, and some issues on the offensive line due to injuries. However you slice it, that’s a recipe for a low-scoring affair.

New Orleans knows what Michael Thomas brings to the table, but they also know he’s played just four games over the past two seasons due to ankle injuries. As such, it’s highly unlikely they’re going to risk him on the wet grass against the Packers. That means Book will need more productivity than he got last weekend against a defense that gave up the 10th-most passing yards in 2021.

While Dalton might get a bit more time this week than he did last, I don’t expect the Saints to risk his health with Winston still not fully back. On the flip side, Love is feeling good, and the young receivers have something to prove after their dressing-down from Rodgers. That said, they’re still learning the plays and will be dealing with a slick football.

The Packers need to find out what their passing game can do for them this season, while the Saints are focused on figuring out their backfield situation. Green Bay had one of the league’s better run defenses last season, and the Saints had a solid pass defense. Put those two together, along with the turnover issues they showed last week, and it makes sense why the Under has already dropped a point since the lines opened. For me, it’s still the best play on a limited board. 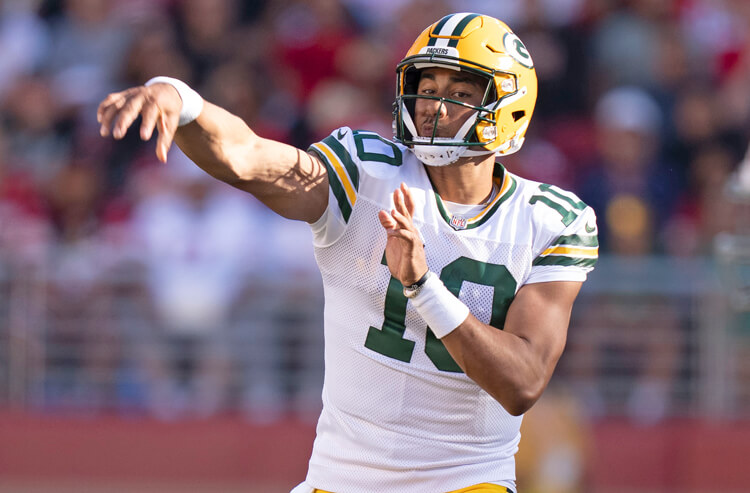