The Washington Football Team are able to get consistent pressure on passers with just their defensive line - something that has plagued veteran QB Tom Brady throughout his storied NFL career.

The 2020 regular season was a great year for betting NFL underdogs.

According to my count (based on closing lines), teams getting the points finished 139-115-1 against the spread for a cover rate of almost 55 percent. That means that if you blindly bet $100 on every NFL underdog each week, you’d be up $1,136.49 (based on standard -110 vig) heading into the NFL Wild Card Weekend.

The NFL playoffs are a different landscape for those who love to bet point spread pups.

No longer do our NFL picks and predictions leave us pondering teams like the Jets, Jaguars, and Bengals and if they’ll suck just a little less this week. Instead, the postseason presents us with some of the league’s elite catching points, with those qualifying teams rarely in the realm of underdogs.

But, every once in a while, a designated dirty dog makes its way into the tournament. This year, that dog is the Washington Football Team, which has been an underdog in 13 of its 16 games (going 8-5 ATS) and is once again pegged as a pup versus Tampa Bay in its opening postseason matchup.

That’s where we begin our NFL betting picks and predictions for Wild Card Weekend.

After winning the NFC East, Washington was gifted a home playoff game on top of plenty of points from the oddsmakers. This spread got as high as +9.5 at some shops but has settled in around +8.5 as we get closer to kickoff on Saturday.

The stink of the NFC East has clouded just how solid this team has been this year – or at least how good the defense truly is. The Football Team actually owned a final positive margin of victory in the regular season, which isn’t bad for an offense that featured Dwayne Haskins, Kyle Allen, Taylor Heinicke and Alex Smith under center and ranked dead last in DVOA at Football Outsiders.

The Washington stop unit is special and is the kind of defense that could give the Buccaneers fits in the Wild Card Round. Washington can get pressure on the passer with just the front four (47 sacks and 25.6 pressure percentage), blitzing just over 32 percent of the time, which allows the linebackers to drop into coverage and clog up the passing lanes.

If we look at Tom Brady’s illustrious career, he’s found himself looking less than terrific against foes who can get consistent pressure with just the defensive line. This season, Brady has bent to the will of the pass rush, with a passer rating of 54.5 when feeling the squeeze, and throwing five of his 12 interceptions while under duress.

That relentless pursuit won’t give Brady much time to allow the big plays he loves so much to develop. Tampa Bay ranked third in passing plays of 20 or more yards (67) in the regular season but will be shortened by a Washington unit that’s allowed only 36 of those big gains all year – fewest in the league.

First-year defensive end Chase Young got the “You don’t pull on Superman’s cape” warning from the NFL media and Tampa head coach Bruce Arians after he chanted, “I want Tom!” following the Football Team’s victory over Philadelphia in Week 17. But this special rookie and DC's defense is the perfect kryptonite for No. 12.

While we’re on the topic of defenses having their way with opposing quarterbacks, no stop unit does a better job bringing Russell Wilson back to earth than the L.A. Rams.

In 18 career meetings with the Rams franchise, Wilson is 8-10 SU with 11 interceptions, 72 sacks taken and a QB rating of 94.5 – seventh-lowest among all NFL teams. He was especially bottled up by L.A.’s defense in 2020, boasting a QB rating of only 74.1 with two INTs and 11 sacks suffered in their two encounters this season.

And it's not only the Rams taking Russ down a peg. The Seahawks offense just hasn’t looked right in the second half of the schedule. After leading the NFL in scoring through the first eight games, Seattle has managed just over 23 points per outing since Week 10. Take a 40-point cakewalk against the New York Jets in Week 14 out of the mix, and that production dips below three touchdowns (20.71) per contest.

The Seahawks have relied on late rallies to escape the jaws of defeat all season, including the last two games of the regular season, in which Seattle scored key fourth-quarter points to edge their opponents (including a late TD to beat L.A. 20-9 in Week 16).

On the year, Wilson has helped orchestrate an average of 15.3 points per second half with nearly eight of those tallies coming in the final 15 minutes. The Rams, on the other hand, sit second in the league with only 6.7 second-half points allowed and boast the stingiest fourth-quarter scoring defense at 3.8 points per final frame.

That’s not to say Wilson won’t somehow pull a rabbit out of his hat in the dying moments of the Wild Card Round, but we’re feeling good about getting L.A. on the other side of the key number, even with its starting QB in question. 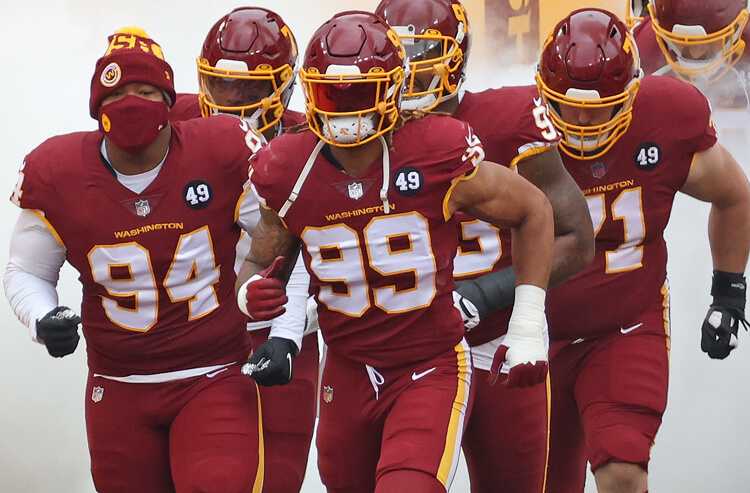