Colts rookie RB Jonathan Taylor had a fantastic finish to the season, churning out 741 yards on 6.2 yards per carry over his last six games. He finished the season third in the NFL with 1,169 rushing yards.

The NFL playoffs kick off this weekend and the first game on the NFL betting board is a wildcard matchup between the Indianapolis Colts and the Buffalo Bills.

After winning the AFC East with a 13-3 record, the Bills are installed as seven-point home favorites against the Colts with the Over/Under set at 50.5.

We break down the NFL odds with our best NFL Wildcard picks and predictions for the Colts vs. Bills on Saturday, January 9 with kickoff at 1:05 p.m. ET.

It's expected to be a chilly afternoon at Bills Stadium with temperatures at 32 degrees, and winds reaching up to 6 mph. Be sure to monitor the gametime conditions with our NFL weather info.

The Over is 5-0 in the Colts' last five games against teams with a winning record. Find more NFL betting trends for Colts vs. Bills.

The Bills were expected to show improvement this season but even their biggest fans probably didn't think they'd look quite so dominant—especially on offense.

Buffalo ranked second in the league in scoring (31.3 points per game) and total yards (396.4 ypg), finished the year with six straight wins and went 8-0 ATS in its final eight contests. The Bills have been particularly dominant at home, where they've gone 7-1 SU and 6-2 ATS with an average scoring margin of plus-8.5 points per game.

That said, oddsmakers might be underestimating a strong Colts team that won four of its last five games and was a fourth-quarter collapse away from beating the Steelers in their only loss during that span.

Indianapolis has few weaknesses, ranking among the Top-11 teams in the league in passing offense, rushing offense, passing defense and rushing defense. They also rank 10th in special teams DVOA, per Football Outsiders, and have the second-best turnover margin at plus-10.

Interestingly, the Colts have been underdogs only once this season, against the Browns in Week 5. And even in that matchup, they opened as short faves before the line shifted to favor Cleveland at -1. That makes it a bit strange to see Indy being spotted seven points on Saturday. Give me the Colts and the touchdown.

Bills quarterback Josh Allen emerged as an MVP candidate this season, throwing for 4,544 yards and 37 touchdowns while adding another eight scores on the ground.

While Allen and the Bills offense have made huge strides from 2019, their defense appears to have taken a step back. They looked especially vulnerable before their bye week, giving up at least 32 points to the Rams, Titans, Seahawks and Chargers.

Now the Bills run defense, which has allowed 4.6 yards per carry this season, will have to contend with a Colts ground game that is red hot. Indianapolis rookie running back Jonathan Taylor excelled down the stretch, piling up 741 rushing yards and 6.2 ypc in the final six games, culminating with a 253-yard performance against the Jaguars last week.

In addition, both of these squads tend to play higher-scoring games when facing off against top competition. The Over is 5-2-1 in the Bills' last eight games against teams with a winning record, while the Colts have cashed the Over in five straight contests against winning teams.

With Philip Rivers giving the Colts stability on offense, Indianapolis ranks second in the league in first-quarter scoring with 6.7 points per game.

Meanwhile, Buffalo's defense ranks 28th in the league in red-zone scoring percentage, allowing opponents to score a touchdown on 65.5 percent of trips into their 20-yard line. That red-zone defense has looked even worse the last few weeks, allowing mediocre offenses like the Dolphins, Broncos and Patriots to score a TD on six of seven trips into the red zone.

The combination of the Colts' ability to move the ball in the early going, and the Bills struggles to defend in the red zone, gives plenty of value on backing the Colts to open the scoring with a TD. 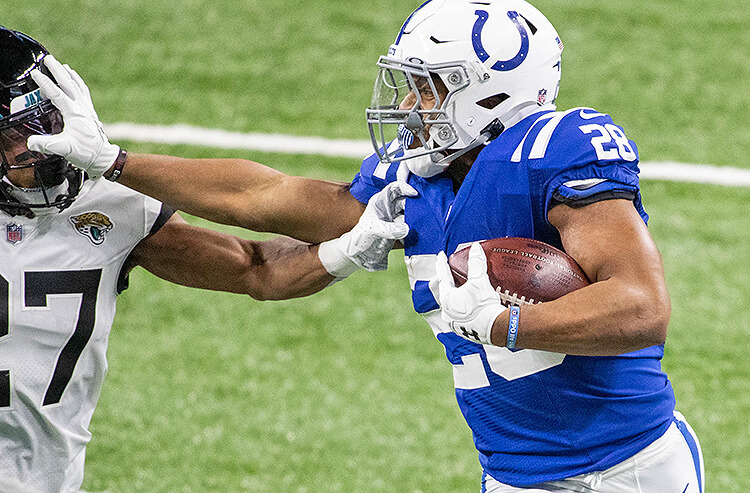 Colts vs Bills Wild Card Picks and Predictions
Provided by