The Eagles have been exposed, if ever so slightly, by opposing rushers in recent games. That'll be the ticket to Green Bay's success on Sunday Night Football. Expect the Packers to favor the run, especially early, in an attempt to establish a ground game. 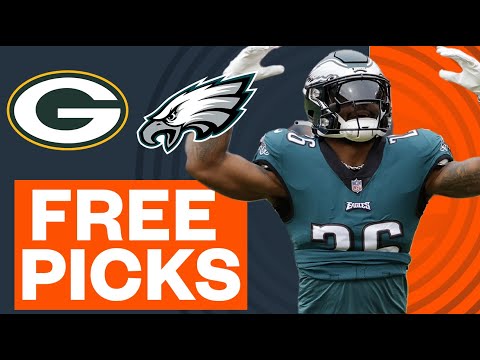 The Philadelphia Eagles can put the nail in the coffin of the Green Bay Packers season tonight on Sunday Night Football.

Green Bay lugs a disappointing 4-7 straight-up record into Lincoln Financial Field in Week 12, having won only once in its last seven outings. The Packers do have added time to rest and prep for this primetime matchup, having last played — and lost — on Thursday in Week 11.

Philadelphia hasn’t looked like the team with the best record in the NFL the past two weeks. After suffering their first defeat of the season in Week 10, the Eagles needed a fourth-quarter comeback to squeak out a victory in Indianapolis last Sunday.

Those performances have this line teetering on a touchdown as we get closer to kickoff.

I run down the spread and Over/Under total for Sunday Night Football and give my best NFL picks and predictions for Packers at Eagles on November 27.

Be sure to also check out Josh Inglis' favorite SNF player prop picks for Sunday's game.

Packers vs Eagles picks and predictions

The blueprint for slowing down the Eagles has been drawn up over the past three weeks.

Opponents have gone after a suspect run-stop defense that was hiding for most of the season thanks to the pile of points being put up by the offense. That forced foes to go pass-heavy, sheltering Philadelphia’s weakness on the ground.

Houston started the bleeding a few weeks back with 168 yards on the ground and managed to cover as a 14-point home underdog on Thursday Night Football. Washington did the same in Week 10, halting the Eagles’ winning ways thanks to 152 yards rushing. And Indianapolis had Philly on the ropes for most of Week 11, with 99 yards on the ground.

That run-centric approach has not only tested the Philadelphia defense but allowed those foes to control possession and milk the clock, keeping the ball out of the hands of the Eagles offense. Philly enjoyed a league-high time of possession (32:48) in the first seven games but has seen that average TOP drop to just 25:43 the past three games (second lowest in the league).

The Packers have the horses to ground and pound just like the Eagles’ last three foes, with Aaron Jones and A.J. Dillon pretty much the lone bright spots for an underperforming Green Bay offense. The Cheeseheads’ running game ranks out No. 4 in DVOA at Football Outsiders and anchors an offense that runs a very methodical pace, sitting 29th in seconds per play.

Considering the game script laid out by this bigger point spread, you could make a case that the Packers will be playing from behind and passing more — a big reason why the Green Bay rushing attempts total is sitting at 22.5 Over/Under in Week 12.

The Packers handed off only 18 times in the loss to Tennessee — one of the best run-stop units in the NFL — but have gone with the run 39, 25, and 31 times in the three games prior and average 25.6 handoffs on the season.

The Eagles have watched their last three foes run an average of 35.7 times per game for a run rate of 53.50% per snap. Philly beefed up the defensive line with the additions of Ndamukong Suh and Linval Joseph, which may temper the yardage given up by a line ranked 24th in Football Outsiders adjusted line yards, but Green Bay is well aware of the benefits of going run early on.

This Packers offense is at its best when the ground game gets going, as it also takes the pressure off Aaron Rodgers, who faces a scary good Eagles pass rush on Sunday night. Green Bay is also hoping to have healthy bodies in the run blocking, with LT David Bakhtiari and G Elgton Jenkins having added time to rest on the mini-bye.

A) Aaron Jones & Miles Sanders Each Over 69.5 Rushing Yards BOOSTED to +480 at Caesars! Bet Now

B) Jalen Hurts and Aaron Rodgers combine for 500+ passing yards and 4+ passing TDs BOOSTED to +550 at FanDuel! Bet Now

This game looked like one of the season's marquee matchups back in the summer, with the Eagles pegged as 2.5-point home underdogs. However, a lot has changed since the offseason.

Last week’s look-ahead line was at Eagles -6.5 and that’s where this official opened on Sunday night following Philadelphia’s close call against the Colts and the Packers' bad loss to Tennessee at home on Thursday.

Some books did see a jumped to a touchdown later in the week, but upon making that adjustment to Philly -7 there was instant buyback on Green Bay, and the line returned to Eagles -6.5. According to Covers Consensus, 56% of picks are laying the points with the home side on Sunday Night Football.

Green Bay’s horrible 2022 campaign continued last week as the offense struggled to move the ball and put up only 17 points in the loss to Tennessee. The Packers offense has mustered more than 22 points only once during the past seven outings and owns an EPA per play ranked 21st since Week 5.

Philadelphia’s offense has sputtered a bit in recent weeks, scoring just 21 and 17 points in the past two outings after lighting up the scoreboard in the opening eight contests. The Eagles rushing attack continues to produce but the passing game has fallen off the pace in those last two outings. Compounding those issues is the loss of standout TE Dallas Goedert.

The Eagles were an ATS ATM for the first seven games of the year, going 5-2 against the spread, but have since failed to cover in three straight outings. On the other hand, the Packers are just 4-7 ATS on the season, including a 2-6 ATS count in their last eight games.

The Over/Under hit the board as low as 45 points and has climbed to 46.5, with some respected online shops down to 46 points as of Thursday morning.

Both offenses have their best success running the football, with Philadelphia ranked out No. 2 in Run Offense DVOA and Green Bay sitting No. 4 in that advanced metric at Football Outsiders. A ground-centric attack from both sides would mean plenty of short gains with the clock stopped, which could favor the Under.

Neither passing game has performed well in recent weeks and both defenses have solid secondaries that protect against the deep ball. The Eagles own the third-best Pass Defense DVOA while the Packers sit 12th in that measurement, while both stop units struggle to contain the run.

Green Bay plays one of the more methodical paces in the NFL, running an offensive play every 29.98 seconds (29th). Philadelphia sits middle of the pack in terms of pace but has seen its plays per game dwindle over the last three outings, falling to 56.7 in that span (fourth fewest) after averaging 68.1 plays per game in the first seven outings of 2022 (third most).

Green Bay is 2-6 ATS in its last eight road games but has gone 10-4 ATS (8-6 SU) as a road underdog under head coach Matt LaFleur (since 2019). Find more NFL betting trends for Packers vs. Eagles.