The Cardinals put their perfect record on the line against Aaron Rodgers and the Packers in primetime, as Green Bay heads to Arizona down a key player. Find out how we see Thursday Night Football unfolding with our NFL betting picks. 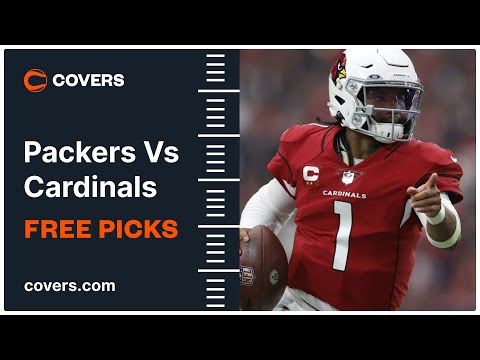 Week 8 will treat us to a Thursday Night Football game well worth getting excited about. The unbeaten Arizona Cardinals will host the Green Bay Packers, who are winners of six straight.

The NFL betting line swung all the way from Arizona -3.5 to -6, after the news of Davante Adams' positive tests.

Here are our free picks and predictions for the Packers vs. Cardinals on October 28.

This game was Arizona -3 (-120) on the look-ahead and then opened at -3.5 Sunday night. This line immediately hit -6 within a one-hour timeframe on Monday, after the Adams COVID news was released. The total also fell to 51 after opening at 53.5.

Canada: Packers backers get the Green Bay moneyline BOOSTED to +260 at NEObet! Claim now
Not signed up yet? New users get a Covers-exclusive welcome package of up to $300. Sign up now

The Under is 4-0 in the Packers’ last four games following an ATS win. Find more NFL betting trends for Packers vs. Cardinals.

With just one loss between the top-two NFC teams and a possible playoff tie-breaker at stake, Thursday might have the biggest game on the Week 8 slate.

The 7-0 SU Arizona Cardinals will be playing their first back-to-back home game this season, after a 31-5 thumping of the Texans. Arizona finished with a +2.5 yards per play (+3.5 yards per pass and +1.8 yards per rush) while the defense denied Houston even a red zone possession. The Cardinals' defense sits ninth in success rate (sixth in dropback success rate and 19th vs. rush success rate) and is allowing just 2.0 touchdowns per game. Considering these numbers were against the Titans, Rams, Browns, Vikings, and the 49ers, they are legit defensively.

Green Bay, on the other hand, has built their 6-1 SU record on wins versus some bad quarterbacks, including Taylor Heinicke, Justin Fields, Ben Roethlisberger, Jimmy Garoppolo, and Jared Goff. Facing Kyler Murray and his No. 4 QBR ranking will be a different story.

Having played six teams who are combined 15-25 SU, the Packers’ numbers need to be taken with a grain of salt, and when you're without receiver Davante Adams, who has a 33 percent target share but 42 percent of the team’s air yards, the offense is in trouble. Their next best receiver, Allen Lazard, is averaging just 26.3 receiving yards per game, and he too was placed on the reserve/COVID-19 list on Tuesday afternoon. Running back Aaron Jones, meanwhile, hasn’t scored a rushing TD since Week 3. Aaron Rodgers can only do so much.

The real edge for the Cardinals will be on offense, when they get to face a Green Bay defense that is thin at corner and sits 26th in defensive success rate. The Packers get gouged on the ground and gave up 195 yards to Washington last week. The 24-10 victory also looks better than it was, as the Football Team's offense turned the ball over on downs three times (twice in the red zone), missed a field goal, and threw another pick inside the 20.

Murray and the offense will have a ton of options Thursday and versus the Packers’ No. 24 DVOA defense, the Cardinals could be hanging up a big number. Arizona has great running backs in James Conner and Chase Edmonds, tight end Zach Ertz looks like a great fit, and Murray has a ton of weapons on the outside.

The Packers were +3.5 at San Francisco in Week 3 and this line was GB +3 before the Adams news. Green Bay failed to cover that game and the Cardinals are much better than the 49ers. The move from the +4 to +6 isn’t as big as it seems. Give us the home side that has the better offense, defense and has beat some decent teams over the last six weeks.

Combined, these two teams are 5-9 O/U on the year. Arizona’s offense is doing its part, as it's scoring 32.1 points per game (fourth), but the Cards’ defense has been stout, including in games against the Rams, Titans, Browns, and Vikings, In all, the Arizona defense is giving up a league-low 16.3 points. If the Packers are going to hang just 24 points versus Washington with Adams at home last week, Rodgers and the offense could struggle versus the No. 2 DVOA defense.

Without Adams, Green Bay's offensive strength sits in the backfield with Jones and A.J. Dillon. The only problem with that is Arizona has allowed just one RB rushing TD this year. They also allow the fourth-lowest QBR to opposing quarterbacks. With a receiving corps that will consist of Randall Cobb, Amari Rodgers, and Equanimeous St. Brown, we don’t like Green Bay’s chances of topping its team total of 21.5. The Cardinals are allowing just two TDs per game this year.

At 51, we’d need both teams to contribute to this total but with a short week and missing a player who accounts for nearly half of the team’s air yards, that’s an Under for us Thursday. The Under is 5-0 in the last five TNF games.

Edmonds finally looked completely healthy last week after avoiding the injury list ahead of Week 7. The explosive Arizona back went for 81 yards on 15 carries. He also played 69 percent of the snaps while Conner saw 30 percent, which was his lowest usage of the season.

Edmonds gets the majority of the work between the 20s, so counting on him for TD isn’t the best bet, but with a rushing total of 38.5, it’s our favorite play on this game.

Edmonds has a 5.8 yards per carry, which is a full two yards more than the plodding Conner. He’s topped 40 yards rushing in five of his seven games and has played two Top 10 DVOA rush defenses. The Packers are a soft defense and their starting nose tackle, Kenny Clark, is questionable.

Washington averaged 6.7 yards per carry against the Packers last week while the Bears ran to 5.4 ypc against Green Bay in Week 5. The Packers sit 28th in defensive success rate, have the No. 23 DVOA rush defense, and are giving up 146 yards on the ground per game over the last three weeks, which is the third-most in the NFL.

We’d play this total all the way up to 49.5 yards which makes 38.5 a two-unit play for us on Thursday night. 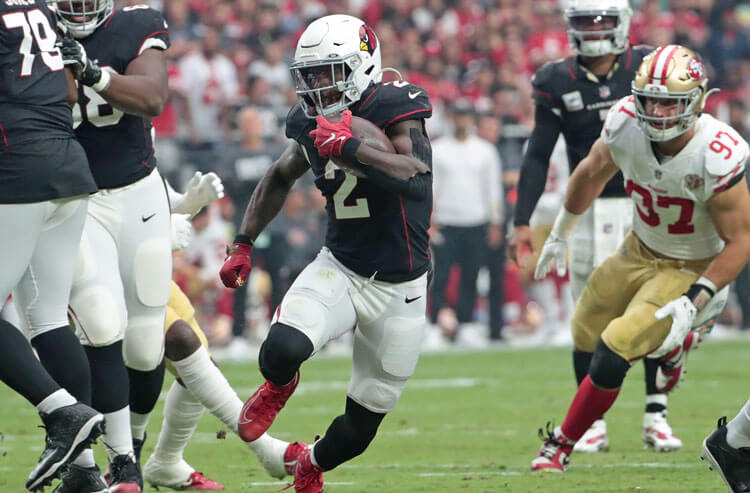