Colts vs Texans Week 13 Picks and Predictions: Taylor Rumbles On

Houston has been in the NFL's gutter all season, and Indy is rounding into form behind its stellar O-line. Find out if the road team can stay focused and cover this multi-score spread as we break down our Week 13 picks for Colts vs. Texans.

There’s only one spot splitting them in the AFC South standings, but there’s a world of difference between the Indianapolis Colts and Houston Texans. The Texans sit on a 2-9 record, compared with the Colts, who sit one spot higher with a 6-6 record and have over doubled their number of points scored this season.

Both teams lost last Sunday, and bouncing back today will be key for both, in particular the Colts who still have playoff ambitions. Don’t miss our NFL picks and predictions for Colts vs. Texans on Sunday, December 5.

The total points line has moved by half a point from 46 to 45.5 but we’ve seen a 1.5-point leap for the Colts, who were 7.5 point favorites upon opening but are now 9.0 point favorites.

The Colts are 4-0 ATS in their past four road games. Find more NFL betting trends for Colts vs. Texans.

Colts vs Texans picks and predictions

This AFC South features two teams who are gulfs apart. It’s fair to say that the four wins separating their two records is probably misleading because there is such a big difference between where both teams are.

Besides that incredible shock win over the Titans two weeks ago, defeats have come thick and fast for the Texans since beating the Jaguars in Week 1. We know all about the problems that the Texans have had with quarterbacks: first Deshaun Watson holding out for a trade and then Tyrod Taylor missing some time with injury.

Those absences are part of the reason that the Texans are the lowest-scoring team in the NFL, with just 164 points so far this season, averaging just 14.9 points per game. That offense is ranked dead last in offensive DVOA also, and besides Brandin Cooks, who is far from the Cooks of old, there really is a lack of quality on that offense. Alongside Cooks is rookie Nico Collins, who hasn’t been awful this year but hasn’t pulled up trees either. The running back room is led by David Johnson and Rex Burkhead, both established veterans but again, far from the players they used to be.

That offense will be lining up against the Colts D on Sunday: a defense ranked 12th in defensive DVOA and capable of some big days. However, they’re not as good as the Houston defense, who as mentioned in previous weeks are sneakily good and better than you’d imagine from a team with that record.

The Colts offense though, well, that’s become hard to stop. It’s easy to wax lyrical about the Colts offensive line, but the superlatives are endless. They’re among the elite in passing protection and run blocking. They are an immensely talented group and in all truth it’s them, not Carson Wentz or Jonathan Taylor that are the true stars of this team. Everything good that this offense does is built on their hard work. That’s not a slight on Taylor, the league’s rushing leader, but a compliment to just how good that unit is. Taylor is a fantastic running back, but it’s definitely easier when you have that line creating holes for you.

With Taylor in full burst and Wentz beginning to look like he’s gotten over his last couple of years in Philadelphia, they’ll be hard to beat. The jury was out when the Colts moved for Wentz this season but it’s clear that the reunion with Frank Reich has been good for him. He’s thrown 21 touchdowns with 5 interceptions so far this season, a far better ratio than last year when it was nearly 1:1. He’s also posted his highest QB rating since 2018.

With him improving and the incredible cast around him, it’s clear that the Colts will win on Sunday despite the Texans’ positive results against fellow AFC South teams this year. The Colts may have lost to the Bucs last week but if the offense can rumble like that then they’ll have no problem dispatching the Texans and covering the spread in the process.

A look back at the Texans' recent results shows that it’s probably best not to rely on them to score a huge amount of points. If they score their average 14.9 points per game, then that would leave the Colts needing to score 30 points in order to cover.

However, this is a team that has scored 30+ points in six of their past seven games, including 31 last time they met the Texans. Over the past two weeks, they’ve managed to put up a huge 72 points on the Buccaneers and Bills, two elite defenses, and you’d have to think that the Over will land.

It’s not the most exciting suggestion for the best bet of this game – that would be some crazy odds prop – but this is the smartest. Sure, the Texans defense is pretty good, but this is a Colts offense at the peak of its powers. The Colts are, in my mind, the best team in the NFL without a winning record and they still have a very real chance at reaching the playoffs.

The Colts have the players, the health, the motivation and the confidence. Put all of those small aspects together and it’s clear that they should be able to cover the spread in Houston. 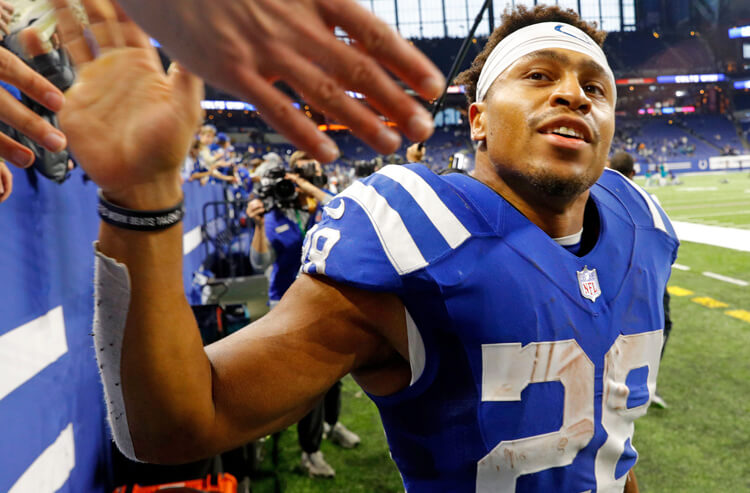 Colts vs Texans Week 13 Picks and Predictions: Taylor Rumbles On
Provided by