Chargers vs Bengals Week 13 Picks and Predictions: Cincy Run Game Will Be Too Much For Bolts

Joe Mixon and the Bengals running game has been devastatingly effective recently. Now they welcome a Chargers team with the league's most futile run defense — so our NFL picks are banking on Cincy grinding out an ATS win in a low-scoring affair.

The Cincinnati Bengals not only sent a message across the AFC North with their one-sided win over the Pittsburgh Steelers last Sunday... but also to the rest of the conference.

The Bengals can build on that big victory when they welcome the Los Angeles Chargers in Week 13.

Cincinnati embarrassed the long-standing divisional gatekeeper and brings a two-game winning run into this Sunday’s homestand, sitting as a field-goal NFL betting fave. The Chargers are playing their second straight road game and limp into Sunday off a bad loss to the Denver Broncos.

Here are our free NFL picks and predictions for Chargers vs. Bengals on Sunday, December 5.

Cincinnati opened as low as -2.5 on Sunday night and quickly shot to -3. Some books are now dealing the Bengals as high as -3 (-120), indicating a move to -3.5 could be on the way if money keeping coming in on the home side. This total hit the board at 51 points and has slimmed to 50.5. Use the live odds widget above to track any future line movements right up until kickoff and be sure to check out the full NFL odds before placing your bets.

The Under is 4-1 in the Chargers' last five road games. Find more NFL betting trends for Chargers vs. Bengals.

Chargers vs Bengals picks and predictions

There was no shortage of bright spots in the Bengals’ 41-10 win in Week 12, but as it pertains to this upcoming matchup with the Chargers, all eyes swing to the dominant performance put in by running back Joe Mixon.

Cincinnati’s star rusher rumbled for 165 yards and two touchdowns, picking up 5.9 yards per carry. That came on the heels of another monster day from Mixon in Week 11, when he crushed the Las Vegas Raiders for 123 yards on 30 runs along with two scores. While Cincinnati’s high-flying offense gets all the headlines, Mixon has quietly made the Bengals the ninth-best rushing game in terms of expected points added per rush on the season.

Cue the Bolts and their turnstile stop unit. Los Angeles ranks last in the league in rushing yards allowed per game (145.3), watching foes run up and down its back at a rate of 4.7 ypc. That inability to slow down the ground game did the Chargers in this past weekend, giving up 147 yards on 33 attempts to Denver's rushing attack.

Should the Bolts decide to sell out on stopping the run in Week 13, that leaves Cincy quarterback Joe Burrow plenty of time and space to operate. Burrow has been pretty quiet in his last two outings (just 53 passes for 338 total yards), but that’s by no way of the defense — just the team's dedication to the run.

Los Angeles’ troubles with the rush have also led to plenty of short third-down tries for foes, with the Bolts posting a 48.91 percent stop rate on third downs — second-worst — including a dismal 52.5 percent clip over the past three games. That’s trickled down into extended drives from opposing offenses and leaves the L.A. defense feeling the grind as it hits the road for the second straight week for a 1 p.m. ET kickoff in chilly Ohio (possible snow showers for Sunday).

The Bengals defense has put up some solid numbers in 2021, ranked No. 5 in EPA allowed per play (-0.049) on the season and allowing fewer than three touchdowns per outing.

Cincinnati has tightened its belt the past two games, locking down the Raiders and Steelers to just 23 total points against and 278 and 301 yards allowed, respectively. On top of those stingy efforts, the Bengals have stirred up chaos with five sacks, 11 QB hits, three interceptions, and two fumble recoveries.

Chargers QB Justin Herbert has faced some heat with his pass protection down bodies. Over his last three games, Herbert has suffered seven sacks and been hit 21 times (10 vs. Denver) while throwing four INTs.

And should the Bengals’ ground-and-pound approach chew up clock and leave the Chargers with limited touches — and it will with Cincinnati running the second slowest tempo on offense in the NFL (30.03 seconds per play) — Hebert may have to press with passes and make this Bolts' playbook one-dimensional.

The QB matchup for this one sounds really sexy on the pregame shows, but this will be a grinder of a game. The total opened as high as 51 points but has slimmed to 50.5. We like the Under.

I warned bettors this spread would move fast after the contrasting performances of these two teams with my Bet Now/Bet Later suggestions on Sunday night.

But within that article, I also said that if you missed the Bengals at -2.5, the -3 was a solid consolation since this spread would likely land on the other side of a field goal. Here we are Tuesday morning, and Cincinnati is a juiced field goal favorite with some shops already tacking on the half-point hook to -3.5.

The Bengals can make some noise down the home stretch — with four of their final six games at home — and it starts with building momentum against L.A. in Week 13. 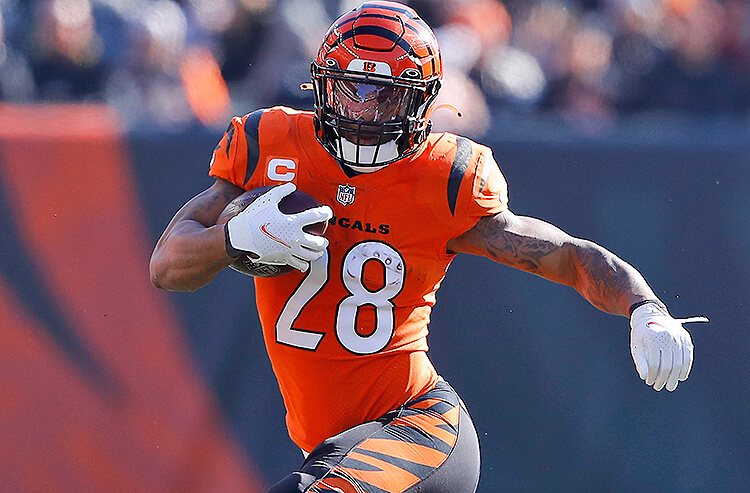 Chargers vs Bengals Week 13 Picks and Predictions: Cincy Run Game Will Be Too Much For Bolts
Provided by

NFL Draft Odds 2022: Pass Rushers and Blockers at a Premium
Chris Gregory | Jan 18, 2022
About Us
Contact Us
Careers
Our Team
Brand
Testimonials