Through three games, 2022 has been a new low for Baker Mayfield, his first season with the Panthers. Unfortunately for Baker, Week 4's clash with the Cardinals will see him fall even lower — our picks have more on a bad matchup for Mayfield.

The Arizona Cardinals find themselves a long way from the desert, visiting the Carolina Panthers in Week 4 of the NFL season.

Arizona brings a shaky 1-2 record to the East Coast to battle another 1-2 team hoping to build momentum at home. Carolina won an ugly divisional war with New Orleans last Sunday, which cooled the hot seat of head coach Matt Rhule… for now.

The Cardinals are an overtime win away from being 0-3 but a slow start to 2022 was expected considering the challenge of the opening three weeks, which put Arizona up against Kansas City, Las Vegas, and the L.A. Rams.

Has the market soured on the Cardinals?

It would seem that way, considering what the lookahead line was for this game and where we find Kyler Murray & Co. heading into Sunday’s road trip to Charlotte. I breakdown the spread and Over/Under total as well as give my best NFL picks and predictions for the Cardinals at Panthers on October 2.

Cardinals vs Panthers picks and predictions

If you follow along with my weekly NFL Underdogs column, you’ll find that I’m backing Arizona +2.5 vs. the Panthers in Week 4.

A big part of that handicap is what the Cardinals' defense is doing through three weeks, and just who they’ve done it against.

Defensive coordinator Vance Joseph is bringing blitzes more than any team in the NFL (46.8%) and producing a ton of pressure (32.1% of dropbacks) but happened to be doing it against the wrong kind of quarterbacks.

Arizona faced a murder’s row of QBs in the first three games — Patrick Mahomes, Derek Carr, Matthew Stafford — who are all great at breaking down the blitz and exposing holes in coverage. Because of that, this Cardinals secondary, which isn’t great to begin with, has looked really bad: 30th in pass defense DVOA at Football Outsiders and 26th in EPA allowed per dropback.

Baker Mayfield is a step down in QB competition for the Cardinals. A big step down, like falling off a cliff, especially when you factor in just how bad Baker is against the blitz. Mayfield is notoriously unstable under pressure and has been even worse in 2022, owning a passer rating of just 62.6 and completing less than 46% of his throws when blitzed.

He faced a similarly aggressive attack against Wink Martindale’s defense (second highest blitz rate) when Carolina lost to the Giants in Week 2. Mayfield completed only 14 of 29 attempts for a total of 145 yards — an average of only five yards per attempt.

Carolina offensive coordinator Ben McAdoo didn't soften his thoughts on Mayfield's performance through three games in his press conference on Thursday, telling reporters that Mayfield's footwork and fundamentals are still not where they should be.

That's a telling statement for a Heisman-winning former No. 1 overall pick who has been a starting QB at the pro level for the past five years. Fundamentals shouldn't be a concern at this stage in his career.

Arizona had success against Mayfield during his ill-fated tenure with the Browns. The Cardinals beat a Baker-lead Cleveland team twice while checking the QB to a passer rating of 94.9, with a completion rate of 69%, four touchdowns, two interceptions, and six sacks taken. That includes a run-in last season, in which Arizona sacked Mayfield five times and picked him off once, giving up 234 yards in a 34-14 win in Ohio.

This time around, Mayfield’s passing yards total is sitting at 206.5 yards. The Arizona secondary isn’t great, and there are some injuries up front on defense, but Baker is a 180 in terms of QB competition for the previous three games and the weather could be working against him as well, with the forecast in Carolina calling for rain and wind on Sunday afternoon.

He’s gone for passing totals of just 145 and 170 yards the past two weeks and I don’t see him cracking 200 yards on Sunday either.

Bonus: He’s EVEN money to throw an interception (Over 0.5 INT) at DraftKings. Worth a wager considering the chaos the Cardinals kick up.

A) Curtis Samuel Over 49.5 receiving yards and Jahan Dotson to score a TD BOOSTED to +700 at Caesars! Sign Up Now

The look-ahead line for this contest was originally Arizona -2.5 on the road. However, the Cardinals’ rough start to 2022 as well as injuries on both sides of the ball (and the ongoing suspension of top WR Deandre Hopkins), has flipped this spread on its ear.

Following Carolina’s win over the Saints and the Cardinals’ loss to the Rams in Week 3, the official Week 4 opener pegged the Panthers as 1.5-point home chalk. From there the market deviated, with some books slimming this spread to -1 and others climbing to Carolina -2.5. As it stands Thursday, the market consensus is -1.5.

PointsBet books are reporting 84% of bets and 89% of early money on Arizona but could be apprehensive to move much off this current spread due to the pattern of late money showing up on the Panthers the past three Sundays. Carolina has seen significant action late in each game this season, driving major movement to its lines just before kickoff.

The look-ahead total for Cardinals at Panthers was sitting at 48.5 points this summer. The Week 4 opener on Sunday posted an Over/Under of 45 points, with both offenses struggling to meet offseason expectations.

Murray and the Arizona passing game is already missing Hopkins but could also be without Rondale Moore (questionable) and A.J. Green (doubtful) for Week 4. The Cardinals managed only 12 points against the Rams in Week 3 but still sit No. 8 in EPA per play.

Carolina’s experience with Mayfield under center isn’t going well. The former No. 1 overall pick owns a QBR of just 18.8 through three games, leaving the Panthers to eke out only 5.1 yards per play. Rhule’s team is leaning more and more on the rushing attack with Christian McCaffery, which means shorter gains and continuous clock.

To add to those faltering offenses, the leftovers of Hurricane Ian could make this a wet and wild environment in Charlotte. There is a 70% chance of rain and wind gusts up to 25 mph are forecast for Bank of America Stadium. The surface is FieldTurf Pro so it should drain well and provide better traction than natural grass. 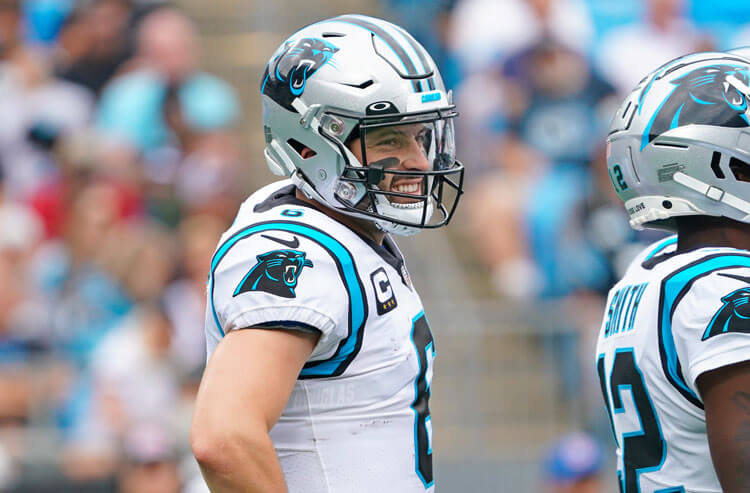