Chase Young has lead a Washington defense that had the fourth-highest pressure percentage (25.6 percent) in the NFL, despite blitzing on only 32.4 percent of defensive snaps.

Tom Brady is back in the NFL playoffs but this time in the red and pewter of the Tampa Bay Buccaneers, who visit the Washington Football Team in the NFC Wild Card Round this Saturday night.

Brady and the Bucs opened as 7.5-point NFL betting favorites on the road, but this line has climbed as high as -9 with money taking Tampa Bay. Washington earned a home playoff game by winning the dismal NFC East division and went 5-3 ATS inside FedEx Field this season.

These are our NFL free picks and predictions for Buccaneers vs. Washington on January 9, with kickoff at 8:15 p.m. ET.

DC will be chilly Saturday night, with a temperature of 34 degrees. Wind gusts will top out at 10 mph with clear skies and a zero percent chance of precipitation. Be sure to monitor the gametime conditions with our NFL weather info.

The Under is 6-0 in Washington’s last six home games. Find more NFL betting trends for Buccaneers vs. Washington.

This spread has made major moves since opening at Tampa Bay -7.5. Money on the Bucs has bullied this point spread all the way to -9 and it may not stop there. Washington’s NFC East crown is a bit of a booby prize and the Football Team isn’t exactly peaking entering the playoffs, barely edging the Eagles in Week 17 to snap a two-game losing slide.

That said, while Washington’s 7-9 record doesn’t invoke the strongest confidence, this team was competitive all season. On the year, the Football Team owned an average margin of victory of +0.3 and boasts one of the best defenses in the league. Washington has held each of its last seven opponents to 20 points or less, buckling potent scoring attacks like Seattle and Pittsburgh during that span.

The Football Team finished the regular season ranked third in defensive DVOA at Football Outsiders and have a disruptive stop unit that causes plenty of chaos on the field. Washington enters the tournament with 47 sacks and 23 takeaways, including 16 interceptions, and has the ability to translate those mistakes into six points.

Outside of a Week 6 win over Green Bay, Tampa Bay hasn’t been able to pick up wins against that higher tier of competition (losses to Saints (x2), Rams, Chiefs, and Bears). In fact, 10 of the Bucs’ 11 victories have come against opponents with a collective 42-70 SU mark (0.375) and none of those 10 foes had a final record above .500.

Is the Washington Football Team in that higher tier of competition? They are when you’re giving them nine points at home.

Washington’s pass rush was among the best in the NFL, tied for the fourth-highest pressure percentage (25.6 percent) in the league despite blitzing on only 32.4 percent of defensive snaps. That ability to get to the quarterback with just the front four has historically been the key to slowing a Brady-led offense.

On top of that, the Football Team have been fantastic at keeping the play in front of them, allowing a NFL-low 36 passing plays of 20 or more yards in the regular season. Tampa Bay’s air attack depends on those deep strikes – posting 67 plays of 20-plus on the year (third-most in the league) – and Brady won’t be allotted time in the pocket to allow those home runs to develop.

On the other sideline, the Bucs defense is just as stingy. Tampa Bay sits next to Washington in terms of sacks (48) and pressure percentage (26.7 percent), allowing only 22.2 points per game on the year. However, the likely loss of LB Devin White to a positive COVID-19 test takes one of the Bucs’ defensive captains and top talents off the field.

The Football Team aren’t the most explosive offensive opposition (ranked 32nd in offensive DVOA) - in fact, they’re the least - and veteran passer Alex Smith is far from the quality of QB Tampa has taken on in the past month. This game will be fought in the trenches and stay below the 45-point total.

With Washington bringing the heat and Brady hearing footsteps, the Bucs offense will get scaled back to shorter gains. Alleviating that pressure means plenty of looks coming Rob Gronkowski’s way.

Brady’s best buddy hasn’t exactly stuffed the stat sheet this season, but he’s stepped up as a touchdown target over the past month. Gronk has caught just eight balls over the past four games and three of those catches have been for scores.

Washington has done a good job limiting gains from opposing tight ends but has allowed seven touchdowns to the position on the year. If WR Mike Evans is at all slowed by that left knee injury suffered in Week 17, Gronkowski becomes the top red-zone target for Tampa. He’s no stranger to the pressures of the postseason and has a dozen career playoff touchdowns on his resume.

Did you know that if you parlayed this week’s NFL Buccaneers vs. Washington picks, you could win $107.72 on a $10 bet? 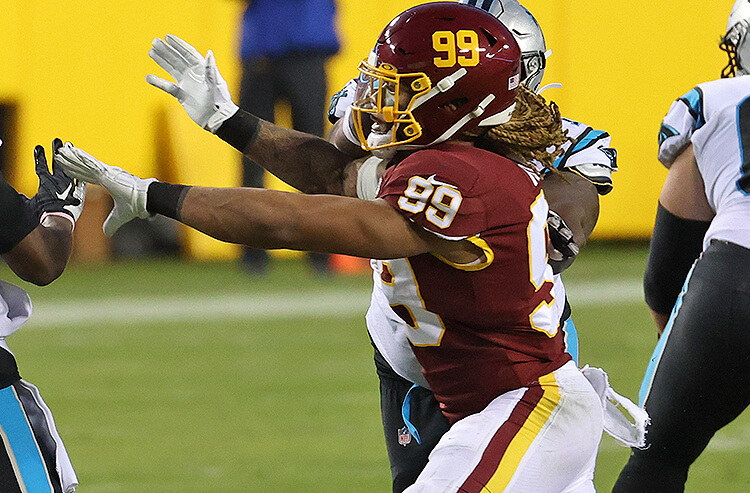 Buccaneers vs Washington Wild Card Picks and Predictions
Provided by