If you love college football betting like I do, there’s something you simply have to accept. Every season, the MAC eventually winds down, and I have no shame in telling you that I usually shed a single tear--like the “Crying Native American” from the Keep America Beautiful commercials in the 1980s.

Perhaps no conference in the country gives us more ridiculous middle-of-the-week joy, but at least we get one more big-time showdown as the Mid-American Conference prepares to crown its 2020 champion.

Let’s dry our misty eyes and give you our college football free picks and predictions for Ball State at No. 23 Buffalo, with kickoff scheduled for Friday, December 18 at 7:30 p.m. ET.

This game will be played indoors at Ford Field in Detroit. Be sure to monitor the gametime conditions for other matchups with our NCAA football weather info.

Ball State may not have the most storied football history, but the Cardinals came alive this season after a loss in their opener. They’ve won five straight, including a stellar comeback victory against Western Michigan when the Cards scored 17 unanswered points in the fourth quarter to win 30-27.

While Ball State is suspect on defense, its offense brings plenty of talent to the table. Quarterback Drew Plitt and his 13 touchdowns lead a group that averages more than 33 points per game, and his favorite target is Justin Hall and his 620 yards receiving this season.

The Bulls are the heavy favorites in this matchup and are one of the few teams remaining in college football that have a chance to finish with a perfect record. As usual, Buffalo prides itself on rushing the football and few teams do it better. Running back Jaret Patterson is a superstar, and his numbers this season included an eye-popping 1025 yards and 18 touchdowns.

The Cardinals have been a great story in rallying to win five straight, but they’re just overmatched here. Buffalo has covered in seven of its last eight games as a favorite, and Ball State just isn’t good enough defensively.

This game is going to be played indoors on field turf, and I think that’s a big factor when two teams like this hit the gridiron against one another. While Ball State can’t match the offensive firepower of the Bulls, the Cardinal’s dramatic come-from-behind win versus Western Michigan proves that they can score points in a hurry. The Over is 6-2 in the last eight meetings in this series.

The Bulls have the best scoring offense in the nation, posting 51.8 points a game. The Cardinals will come out motivated and perhaps pull off some early defensive stands, but once the adrenaline wears off, Buffalo should eventually wear them down. Ball State gives up more than 27 points a game, and when the Cards look at the final score, a few players might even shed a single tear. 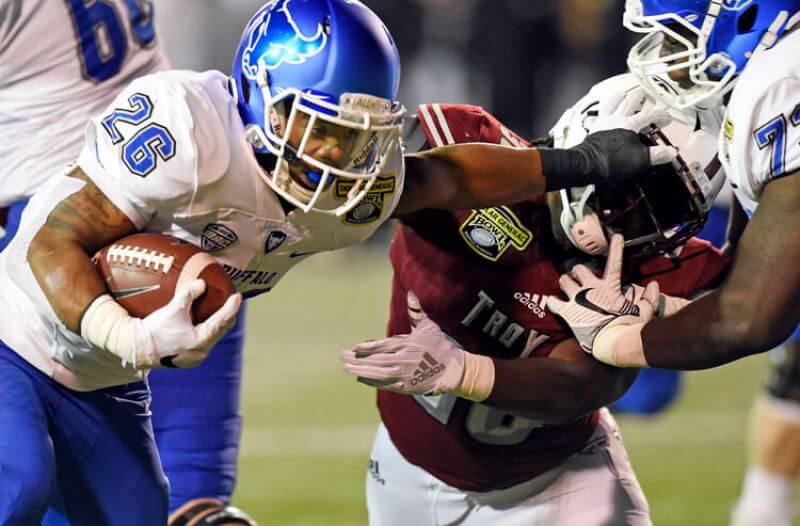