Phoenix has another big winning streak on its hands, but Utah has homecourt and plenty of evidence to suggest it can compete. Find out which side is the better NBA betting value tonight with our Suns vs. Jazz picks.

The Phoenix Suns will be looking to win their eighth game in a row when they take on the Utah Jazz on Wednesday. These teams just met on Monday night, when the Suns earned a 115-109 win in Phoenix.

Will home-court advantage help Utah get revenge tonight? Check out our Suns vs. Jazz NBA picks and predictions for January 26 to find out.

The line in this game is moving in a rather interesting direction, as Phoenix was a 3.5-point favorite at open and is now laying only 2 or 2.5 — despite taking most of the action thus far. Meanwhile, the total has gone from 224.5 at open all the way down to 222.5.

Utah is 11-3 against the spread in its last 11 home games versus teams with winning road records. Find more NBA betting trends for Suns vs. Jazz.

Suns vs Jazz picks and predictions

The Jazz are coming off back-to-back losses heading into this game, but they did cover in those games and their opponents were the Golden State Warriors and this same Suns team. Both of those contests came on the road, but the team now heads back to Salt Lake City. The Jazz are 15-9 straight-up in home games this year, and you can really never count them out when they’re playing at Vivint Arena.

While Utah is down the more significant pieces in this game, Phoenix has played two tough games after coming back from a five-game road trip. That’s going to catch up with the Suns eventually, and it wouldn’t be all that surprising if the Jazz were to come away with an upset in this one. With Phoenix being without Ayton and McGee tonight, the team is going to be down to Bismack Biyombo and Jalen Smith at the center position in this one. Those two have performed admirably for the Suns this year, but they could be in trouble against a Gobert-less Jazz.

Utah will likely play Rudy Gay as a small-ball center rather often in this game, as it will stretch the floor and really open things up for Utah’s offense. Meanwhile, Biyombo and Smith aren’t likely to dominate Gay on the offensive end, as they’re not capable of creating offense for themselves.

The Jazz should also get some improved guard play in this game, as Mike Conley will be in the lineup after sitting out the game at the Footprint Center. Conley makes a two-way impact for Utah, so he should be able to make things tough on Chris Paul, who had 27 points last game. Conley will also knock down some big shots in this one.

It’s also huge that Utah will get Bogdanovic and Ingles back, as that gives the Jazz two big wings that normally compete on both ends and hit triples. They’re also the types of guys that get the crowd into it, and the fans will make an impact in what is a massive national television game.

The Over is 14-10 in the 24 games that the Jazz have played at home this season, and it’s also 57-34 when the Suns are playing against teams that shoot at least 36.0% from the outside under head coach Monty Williams. The average total points scored in that second situation is 225.9 points per game, which is a bit higher than the total in this one. The Over has also hit in each of the last three meetings between these teams, and it’s 4-1 in the last five games between these two.

This game really shouldn’t be any different, especially with the Jazz likely to downsize and try to play the Suns’ bigs off the floor. Utah has one of the best shooting teams in basketball, but the team is even more explosive with five shooters on the court.

Also, from a simpler standpoint, these are just two of the Top 5 offenses in the NBA this year. Utah is first in the league in offensive rating, while Phoenix is tied for third. Even without Mitchell, this should be a high-scoring game.

Over the last two seasons, the Jazz are 41-26 against the spread when coming off a game in which they covered. With Utah getting some key rotation pieces back into the lineup, you can count on them to improve that number in this game. With this being a nationally televised contest, there should be a playoff-like atmosphere in Utah tonight. The Jazz have one of the best crowds in all of basketball, so they’ll be fired up off that energy. Meanwhile, the Suns have won a lot of close games lately and could be in a weary spot both in a tough road environment.

Did you know that if you parlayed today’s NBA Suns vs. Jazz predictions and picks in a single-game parlay, you could win $26.45 on a $10 bet? 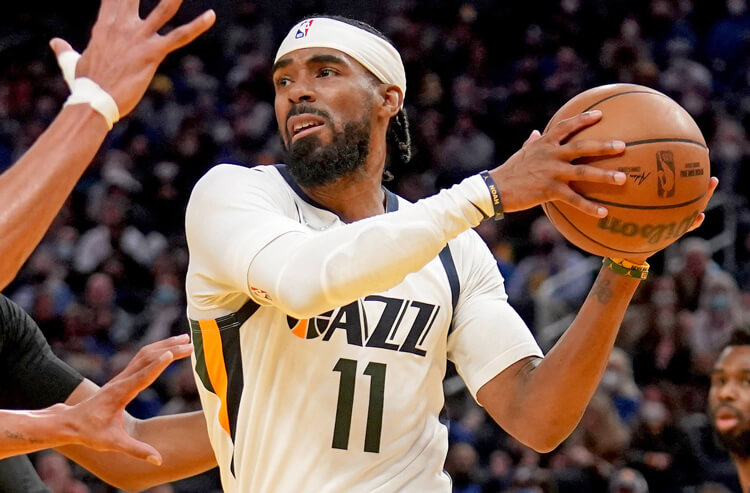 Suns vs Jazz Picks and Predictions: Phoenix Won't Keep the Beat
Provided by

Heat vs Celtics Game 3 Picks and Predictions: Riding Boston's Momentum Back to Beantown
Douglas Farmer | May 21, 2022

Mavericks vs Warriors Game 2 Picks and Predictions: How Will Dallas Respond in Game 2?
Jason Logan | May 20, 2022
About Us
Contact Us
Careers
Our Team
Brand
Testimonials