In today's edition of NBA player prop picks, we're backing Ja Morant to go Over his points total of 29.5 against the Spurs. He's scored 33 or more in three straight games and we have no reason to believe tonight will be any different.

It’s a loaded ball night in the NBA with 10 games on the schedule which means there are plenty of basketball betting options in the player prop market.

Tonight, we do one of our favorite things when it comes to NBA player props, pick on the Los Angeles Clippers and their rebounding abilities, or lack thereof. And don’t look now, but Ja Morant is on another hot streak, can he keep it rolling against the San Antonio Spurs.

Check out our NBA player prop picks for Wednesday, January 26, as we bank on some of the NBA's best to do their thing.

Bullied on the boards

One of my favorite things to do in the NBA player prop market is to pick on the Los Angeles Clippers in the form of opposing player rebounds. Even when that opposing team is the Orlando Magic.

While the Magic aren’t a great rebounding team, they have a great rebounder in Wendell Carter Jr. The Magic big man averages 10.1 rebounds per game for the season but is playing just his third game since returning from a hamstring injury.

Carter only has 12 total boards in his first two games back but that might have just given us a good number for this juicy matchup against the Clippers. Los Angeles is one of the worst rebounding teams in the NBA, ranking 28th in rebounding percentage and 29th in opponent rebounds per game.

So, getting Carter’s rebounding total at 9.5 is too tempting to pass up. He hauled down double-digit boards in seven straight games prior to his injury and in 17 of his last 20 overall which includes a game against the Clippers where he grabbed 14 rebounds. This one looks like a slam dunk.

Atlanta Hawks' power forward John Collins hasn’t exactly been right since his stint in the NBA’s health and safety protocols over the holidays. He is averaging just 14.6 points while shooting 49% from the field in the nine games since his return, that’s down from 17 and 53.7 for the season.

But maybe a matchup with the Sacramento Kings is just what Collins needs to get right.

The Kings are one of the worst defensive teams in the NBA, ranking 29th in defensive rating. But where they really struggle is defending the interior. Sacramento ranks dead last in opponent points in the paint.

That means there should be plenty of opportunities for Collins, who in the 10 games prior to going on the COVID list, averaged 20.2 points on 51.1% shooting, scoring 17 points eight times over that stretch. His point total for this game is 16.5 and is at even money. We like him to get back on track in this matchup.

Back to Ja's well

Oh look, Ja Morant is on another hot streak. The star point guard has put up 33 or more points in each of the Memphis Grizzlies' first three games of their four-game road trip. Now, he’ll look to close the road trip in style when they visit the San Antonio Spurs on Wednesday night.

The Spurs are coming off a win against the flightless Houston Rockets but the win was just the fourth in their last 16 tries and now they’ll have to deal with the red-hot Morant, and slowing down guards has been a problem for the Spurs all season long.

San Antonio gives up the second-most points per game to opposing guards in the Association while ranking 20th in field goal percentage. That could be a problem when it comes to slowing down Morant.

Morant is taking a ridiculous 28 field goal attempts per game over the last three games while shooting 48.8% from the field, averaging 35.3 points per game. Morant also put up 30 points on the Spurs on 12-of-18 shooting (66.7%) back at the end of December. With a point total of 29.5, we’re riding another one of Morant’s patented hot streaks. 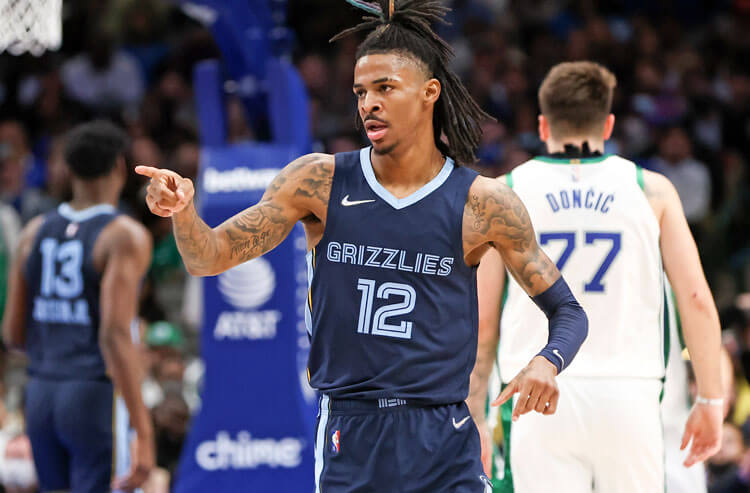