Miami has been hampered by serious injuries most of this season, but still leads the East. New York has no such excuse and sits outside the play-in picture. Find out why these two teams aren't on the same level with our Knicks vs. Heat picks.

The New York Knicks' season is well into panic-mode status, and things won't get any easier tonight as they visit the Miami Heat.

The Heat have somewhat improbably risen to the top of the East's battle royale (just two games separate first and sixth), despite their two best players collectively missing almost half the season so far.

But they're both in the lineup tonight. Does New York stand a chance? Find out with our NBA picks and predictions for Knicks vs. Heat on Wednesday, January 26.

Knicks vs Heat picks and predictions

It's really kind of remarkable that Miami is currently atop the Eastern Conference at 30-17. While every team has had to weather some kind of weird absence, Miami has been decimated like few rosters, with Jimmy Butler already missing 18 games and Bam Adebayo 25, among a slew of other absences.

But that's allowed Miami to cultivate depth on top of what was already a talented, well-coached and defensively terrifying roster. They've embraced the "next man up" approach about as well as any team in the league, with everyone from sharpshooter Max Strus to rebound machine Omer Yurtseven stepping up to deliver key contributions.

Kyle Lowry will remain out tonight, and backup Gabe Vincent has been impressive in his absence, allowing the rotation to keep Tyler Herro up its sleeve to torch second units as he's done all season. You probably know this by now about Miami this season, but expect its reserves to make it up in the aggregate.

New York has been playing better of late after a midseason swoon and is actually 6-2 ATS in its last eight games. RJ Barrett has stood out, averaging 23 ppg in January, providing the Knicks offense with the gas it sorely needs while Derrick Rose is injured and Julius Randle's troubling regression continues.

On the season, the Knicks are the NBA's 24th-rated offense, and asking them to do much damage against Miami is foolhearty. The Heat are currently the eighth-best defensive team, and that's their absolute floor. With Butler and Adebayo both in the lineup, they're probably closer to the Top 3.

Keeping in mind, those two stars also shift the balance on the offensive end, as true two-way shit disturbers. Butler's capable of MVP-type play when fully healthy, and both he and Adebayo can shoulder the playmaking load in Lowry's absence.

This Heat team had by far the NBA's best net rating early in the season before injuries completely derailed them. They can now start to work back towards that torrid pace, and it's tough to back a punchless Knicks offense to waver them, especially at home where they're 16-5 SU and 13-8 ATS.

Between Miami's awesome defense, New York's pathetic offense, and both these teams' plodding paces, we'd be hammering the Under on just about any total. But at 203, we're having some doubts. This is lower than Marlo murdering Prop Joe.

These teams combine to average 212.5 ppg while allowing 208.4, so clearly, the books are either:

a) Expecting a noticeable regression based on both speed of play and New York's ability to crack Miami's code on defense.

b) Expecting bettors to blindly hammer the Under given the matchup and how lame the Knicks have been at putting the ball in the basket.

We're betting it's a bit of both, but this just seems too low. The Heat are 8-1-1 against this total in their past 10 games, while even the Knicks are 5-5 given the same sample, during which time they're playing at the NBA's slowest pace and scoring its fewest points.

We're not predicting much scoring in this game by any stretch, but Miami's a capable enough transition team and New York can't get any worse on offense. This total's been set low enough that we should see it squeak Over.

With the way New York's offense has been neutered, it's easy for an elite, well-rounded defense like Miami to key in on what little of an attack it has left.

Meanwhile, the Knicks will be hard-pressed to return serve on the defensive end, especially with one, possibly two rim protectors sidelined depending on what happens with Mitchell Robinson and Nerlens Noel.

The Heat will have the two best players on the court, and Herro can capably carry the second unit as a better pure scorer than arguably anyone on the Knicks' roster.

As mentioned above, Miami was a net rating monster early in the season, and it's not unreasonable to view that as this team's ceiling. The Knicks aren't on their level, and the rested Heat (haven't played since Sunday) will remind everyone tonight.

Did you know that if you parlayed today’s NBA Knicks vs. Heat predictions and picks in a single-game parlay, you could win $26.45 on a $10 bet? 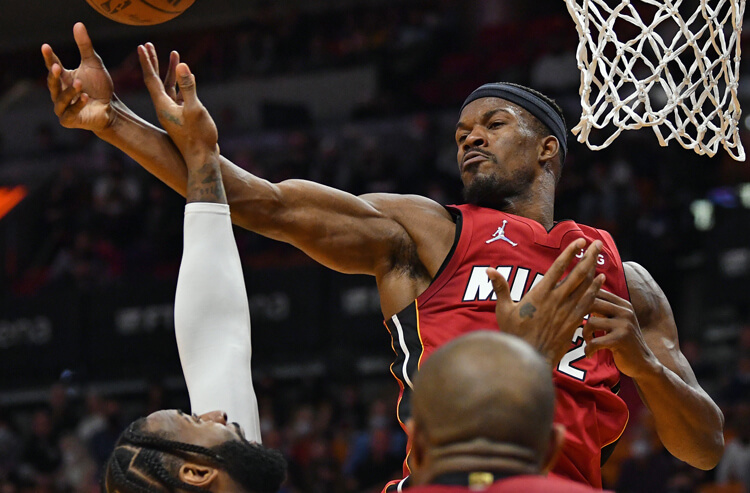