Mavericks vs Trail Blazers Picks and Predictions: Dallas Doubles Down on ATS Losses

Portland's been picking it up recently, while Dallas just got skunked last night and lost one of its most important players. Find out why that could lead to an underwhelming spread performance for the favs with our Mavericks vs. Trail Blazers picks.

The Dallas Mavericks are coming off of a lopsided loss at the hands of the Golden State Warriors and the team now has to turn around quickly and face the Portland Trail Blazers Wednesday night. Chauncey Billups’ team is playing some solid basketball right now, so this should be a hard-fought game.

Will Dallas go out and pick up a big road win over Portland? Keep reading our Mavericks vs. Blazers NBA picks and predictions for January 26 to find out.

After the total opened at 216 in this exciting Western Conference game, the number has since gone up to 217 on most books. Meanwhile, the Mavericks were 4-point favorites when this first became available and it has mostly stayed the same, outside of one site offering 4.5.

The Mavericks are 1-4 against the spread in their last five games. Find more NBA betting trends for Mavericks vs. Trail Blazers.

The Blazers are coming off a two-point loss to the Minnesota Timberwolves on Tuesday, but the team was still able to cover the spread in that one. Portland is now 8-4 against the spread in its last 12 games, and that number is an even better 5-1 when the team is playing at home. Don’t be surprised if the Blazers continue to be a winning ticket for bettors at the Moda Center.

With the Mavericks having to deal with the emotions of losing Hardaway Jr. to a significant foot injury last night, it wouldn’t be surprising if the team really struggles to get up for this one. Hardaway is a key player for a Dallas roster that already lacked depth, and the team had to quickly hop on a flight and get ready for this tough road game. That’s not a recipe for success for the Mavericks, and it’s hard to imagine how this Dallas team is going to space the floor for Luka Doncic. The Mavs star is going to put up numbers in this one, but he won’t have much room to operate. That could mean that he’s due for a somewhat inefficient night, and this offense could stall out, in general.

Despite the fact that the Blazers couldn’t contain Anthony Edwards last night, this team has been much better on the defensive end over the last 12 or so games. Portland should be able to do just fine against this version of Dallas. Of course, Doncic is plenty capable of going off, but the Blazers will focus on limiting Jalen Brunson’s damage here. The team will also be careful when shooters like Reggie Bullock are on the floor.

Offensively, the Blazers will have to work for everything against a very good Mavericks defense. Fortunately for Portland, CJ McCollum is a very good isolation scorer, capable of hitting tough shots late in the shot clock. And Jusuf Nurkic is another great option to play through, as he can score or find others out of the post. That should be enough for this team to hang around and cover.

Overall, it’s rather hard to see a scenario in which these teams don’t go Over here. This total is just extremely low given where these teams are right now. Dallas’ defense has been great this year, but the team was picked apart by Golden State last night. Portland’s guard should be able to get some good looks against this defense, and the Blazers will surely give up their fair share of open attempts here.

Portland would also be wise to try to up the tempo in this one, as Dallas is going to be tired and somewhat shorthanded in this game.

This line is surprisingly big for a Mavericks team that is on the second night of a road back-to-back and also happens to be without its third-best scorer. Hardaway Jr. might be considered overpaid, but he’s a good shooter and gives Dallas some much-needed off-ball juice next to Doncic. It might take some time for this team to adjust to losing him, barring somebody like Bullock stepping up and playing to his fullest potential — he has been a disappointment after having a great year for the New York Knicks last year.

Did you know that if you parlayed today’s NBA Mavericks vs. Trail Blazers predictions and picks in a single-game parlay, you could win $26.45 on a $10 bet? 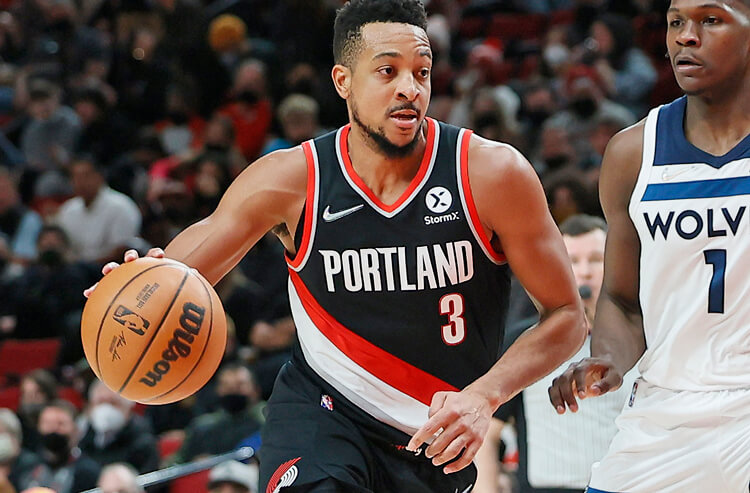 Mavericks vs Trail Blazers Picks and Predictions: Dallas Doubles Down on ATS Losses
Provided by