With KD and Kyrie already ruled out, and the second game in as many nights looking like a potential resting spot for James Harden, our NBA betting picks and predictions are backing the visiting Nuggets to take control early and never look back.

The Brooklyn Nets don’t have long to lick their wounds with the Denver Nuggets coming to the Barclays Center on Wednesday.

Fresh off a loss to the L.A. Lakers, a shorthanded Brooklyn team opened as big as -1.5 playing the second of back-to-back games but a massive market move pushed that spread over the fence to +2.5, leaving bettors to ponder if the Nets will rest James Harden - their only active player worth that big a move. Welcome to NBA betting.

Check out our free NBA picks and predictions for Nuggets at Nets on January 26.

Brooklyn opened as big as -1.5 and that spread slimmed to a pick’em before jumping as far as Denver -2.5 at some books. You can find the Nuggets as low as -1.5. The total hit the board at 227.5 points and fell to 226 before plummeting to 221.5 points early Wednesday morning.

The Under is 11-5-1 in Nets’ last 17 games as underdogs. Find more NBA betting trends for Nuggets vs. Nets.

Nuggets vs Nets picks and predictions

With Kyrie Irving held out of home games and Kevin Durant sidelined with a knee injury, the foundation of the Nets is cracking in the cold New York winter. Brooklyn has lost back-to-back matchups, most recently a listless offensive effort in a 106-96 loss to Los Angeles on Tuesday which came on the heels of reports that star guard James Harden was unhappy with his situation.

Harden did all he could in Tuesday’s defeat, scoring 33 points, grabbing 12 rebounds, and dishing out 11 assists in more than 38 minutes on floor time. Only two other teammates scored in double figures and Brooklyn was on its heels from the tip, falling behind nine points at the half and mustering only 43 points in the final 24 minutes. Now, given the line movement, Harden's status for tonight is in question (even with no official word from the team).

Buckling this broken Brooklyn team may only take two quarters if the Nuggets can continue to come out swinging in the opening two frames. Denver ranks No. 1 in first-half offense, posting an average of almost 58 points per first half, and hung 69 points on the Pistons in the first 24 minutes last night. The Nets sit 23rd in first-half defense and have allowed their last three foes to put up an average of 61.7 points in the first two quarters.

The Nuggets nearly gave up a 10-point lead over Detroit at the break due to careless play and 25 turnovers for a team that usually takes care of the ball. That scare should get Denver in line for this marquee non-conference matchup and the Nets don’t pose nearly as stout a defensive threat with Irving unable to suit up at home and Durant’s versatility and length missing. Brooklyn owns an advanced defensive rating of 116.9 this month (27th) and forces a mere 12.6 turnovers per contest in that span.

Brooklyn’s defensive shortcomings have shown up the past two games, but Denver isn’t much better. This Nuggets team has allowed more than 118 average points over the past five outings and lugs a defensive rating of 117.0 in that span (27th in that stretch).

That’s why this total opened so high at 227.5 points. However, shortly before 10 a.m. ET, this Over/Under dropped dramatically from 226 points to as low as 221.5 – a near five-point dip. As of this writing, nothing official is out but a move like that could be made on the basis that bettors and bookies expect Harden to sit out the second leg of this back-to-back set.

Keep an eye on the status of Harden or other key contributors, but the market is usually ahead of any official news. We'll chase steam on this total, but the Over/Under isn't our favorite option in Brooklyn tonight.

With the way this spread and total are swinging, it really feels like Brooklyn could be sitting some starters in this second straight game. Stay tuned.

Given that curious market move and the Nuggets’ propensity for a strong start, we’re going to focus on the first 12 minutes of basketball. Denver posted 34 points in the first quarter at Detroit Tuesday and is averaging more than 30 in the opening frame over the past three contests. Brooklyn is 28th in 1Q defense and watched Los Angeles run out to 33 points last night.

Denver’s 1Q moneyline is -134 but the 1Q spread sits Nuggets -0.5 (-118). We’ll avoid the push protection and gladly lay the half point with the strong starter.

Did you know that if you parlayed today’s NBA Nuggets vs. Nets predictions and picks in a single-game parlay, you could win $57.33 on a $10 bet? 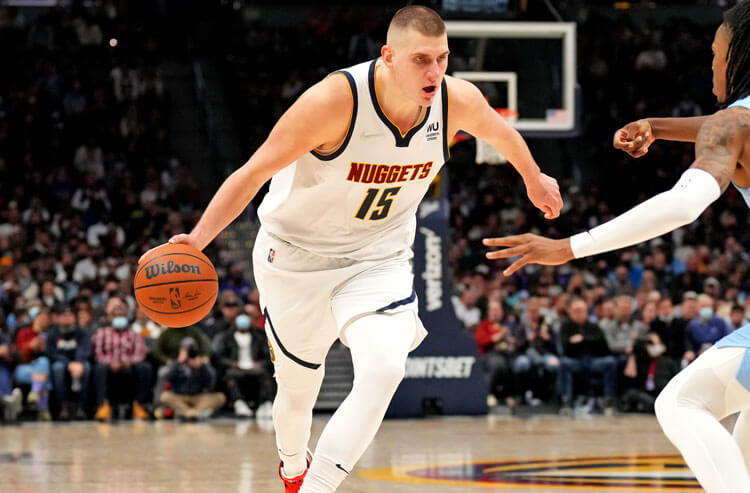