Raptors vs Nets Picks and Predictions: Can Improved Raps Run With East's Best?

The Raptors bring their much-improved defense to Brooklyn to face off against the East-leading Nets, who may be without the services of Kevin Durant and a few others. Find out if the Raps can keep things tight in our NBA betting picks and predictions.

Despite a laundry list of injuries, the Toronto Raptors have broken out of their early-season funk by winning four of their last five ball games and absolutely crowned the Sacramento Kings last night.

But things get a little tougher as they’ll have to play their second game in as many nights, this time against Kevin Durant, James Harden, and the East-leading Brooklyn Nets.

Can the Raptors cover as healthy road underdogs in this one, or will the Nets prove to be too much in this spot? Find out in our free NBA betting picks and predictions for Raptors vs. Nets on December 14.

The Raptors opened this matchup as 8.5-point road underdogs and have seen the majority of the early action, moving the line down to seven. Then Kevin Durant’s questionable status moved the line down further to 5. The total opened at 217 and after getting as high as 218.5 has moved back down to 215.5.

The Nets are 0-5 ATS in their last five games at home. Find more NBA betting trends for Raptors vs. Nets.

Raptors vs Nets picks and predictions

Yes, the Raptors have won four of their last five games and are coming off a blowout victory over the sputtering Kings. But how will things play out against the Eastern Conference-leading Nets in the second half of a back-to-back?

Well, a lot of that depends on the status of Kevin Durant, who is now questionable for this game with a sore ankle. It would be just the third game that Durant has missed all season, and that might not be a huge deal with James Harden still there for the Nets, but Brooklyn is also dealing with a COVID outbreak that has the team’s rotation running very thin.

The Nets have won two in a row, but the last game they lost was also without Durant in the lineup, a 114-104 loss to the Houston Rockets. Now, they face a Raptors team that has really picked it up on the defensive end lately, ranking second in the NBA in defensive rating since Nov. 30.

With no Durant to match up against, look for Nick Nurse to get creative in the way in which he tries to take away Harden in this matchup. (Maybe the box-and-one makes a return?)

Meanwhile, on offense, the young Raptors led by Scottie Barnes, Fred VanVleet, Pascal Siakam and Gary Trent Jr. should still have plenty left in the tank after basically walking over Sacramento last night.

Bet on the Raptors to lean on their defense to keep this one close against a depleted Nets squad.

This game is about as hard as one gets when it comes to predicting the total.

Let’s start with the Raptors' offense. Yes, they put up 124 points against the Kings last night. But that was the Kings. The Nets (when healthy) rank fifth in the NBA in defensive rating, and the Raps averaged 97.6 points per game and ranked dead last in field goal percentage in their previous seven games.

On top of that, when Toronto isn’t getting out and running in transition after a turnover, they run at the slowest pace in the NBA.

Meanwhile, as noted, the Raptors have picked up the effort on the defensive end recently, and Nurse is one of the best in the NBA at taking away a team’s top weapon. And the Nets could be without three of their Top 5 scorers for this matchup.

Not having a bunch of your best scorers and a thin bench is never a recipe for scoring. Bet on this game to fall below the number.

With no KD, Nick Nurse will undoubtedly try and bottle Harden up in this matchup, so the Nets will have to look for others to step up and make some buckets, and first up on that list is shooting guard Patty Mills.

Mills has already started taking more threes recently, jacking up 8.6 per contest over his last 14 games, hitting on a ridiculous 45 percent of his attempts from deep. He has also hit four or more threes seven times over that stretch, including going 4-10 last time out against the Pistons.

And he should get plenty of opportunities to put up threes in this one. Because of the Raptors’ aggressive style on defense, they sometimes overcommit to double teams which in turn leaves someone open on the perimeter. As a result, the Raptors rank 23rd in opponent's 3-point percentage.

While Over 3.5 is a big number, getting +140 value on something that feels like it should be closer to even money is too good to pass up.

Did you know that if you parlayed today’s NBA Raptors vs. Nets predictions and picks in a single-game parlay, you could win $77.47 on a $10 bet? 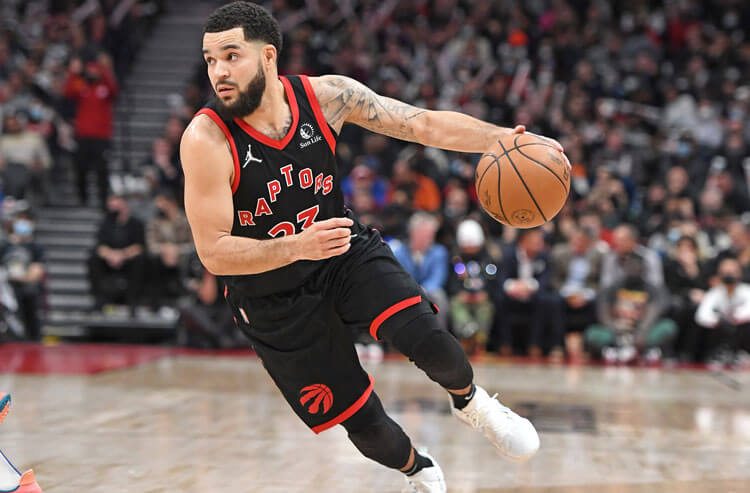 Raptors vs Nets Picks and Predictions: Can Improved Raps Run With East's Best?
Provided by