Stephen Curry has history in his crosshairs Tuesday night as Golden State visits MSG. As his 3-point chase distracts from how bad the 'Bockers actually are, we preview the matchup with our Warriors vs. Knicks picks.

While the world anxiously waits for Stephen Curry to break the NBA's all-time 3-point record (which, in virtually every scenario, will happen tonight), we've also got an actual basketball game to play between the Golden State Warriors and New York Knicks.

New York has been listless of late, losing three in a row and five of its last six. Can it stop the NBA's best team and Steph's media sideshow? Find out with our NBA betting picks and predictions for Warriors vs Knicks on December 14.

Golden State opened as a 3.5-point favorite, where it remains as of Tuesday morning. The total has also remained static at 211.5.

The Warriors are 23-9-1 against the spread in their last 33 games overall. Find more NBA betting trends for Warriors vs. Knicks.

Warriors vs Knicks picks and predictions

The Knicks haven't exactly been playing inspired basketball lately. Their defense has regressed noticeably, even beyond the mean, from last year's elite-ranked phalanx, while their offense has had every ounce of life stomped out of it, relying on little-used rookie Quentin Grimes' 27 points to buoy them Sunday against Milwaukee.

All eyes will be on Steph Curry tonight, entering the game just one 3-pointer behind Ray Allen for the NBA's all-time record. Philadelphia and Indiana sold out on stopping Steph's threes in hopes of preventing the record, which turned out to be a solid defensive strategy. But while the Pacers had Malcolm Brogdon (good) and the Sixers Matisse Thybulle (arguably the NBA's best) to chase Curry around the perimeter, the Knicks have... Alec Burks? Evan Fournier?

Seriously, this is an awful matchup for New York, who doesn't have the defensive chops to slow Curry (or Andrew Wiggins and Jordan Poole for that matter), the offense to test GSW, or the mettle to withstand the national spotlight tonight.

New York's unimaginative offense just scored 87 against the Raptors, and only managed 97 against Milwaukee with Grimes' out-of-nowhere eruption. Do you honestly think they're about to step to — by a wide margin — the NBA's best defense?

Curry breaking the record swiftly would honestly be a blessing for the Knicks, as it removes a huge distraction that won't help them keep their eye on the prize. But either way, with New York's current form, it has to hope that Golden State goes ice-cold, or else there's no chance of competing.

Even if the Warriors are on a back-to-back after a tight win, they'll be coming out amped, knowing the whole world will be watching. Ride GSW and its NBA-best 11.7 net rating to another cover, currently 17-9-1 ATS on the season.

While everyone would love to see Curry go completely nuclear at the Garden to put an exclamation point on history, the reality might be a lot more subdued.

For all his MVP-odds-leading buzz, Curry's scoring and shooting accuracy are actually down considerably from last season, and Golden State as a team has been regressing scoring-wise over the past couple of weeks. Despite this diminutive total (211.5), the Warriors have fallen short in each of their last three games.

We've already chronicled the Knicks' offensive woes above, as Julius Randle has seemingly been afflicted by the Monstars (not to mention being checked by DPOY front-runner Draymond Green), while the team sorely lacks for playmaking and penetration. This isn't a recipe for an Over going against the league's best defense.

Golden State, for its part, just escaped Indiana by the hairs on Steph's chinny chin chin last night, and likely will favor a slower-paced defensive grind, maximizing each possession and not forcing tired legs to run wild.

Asking the Knicks to do their part for an Over is just too much.

We'd love to dive into a Curry 3-pointer prop (good luck, it'll possibly be the most-juiced bet of the season) or something more exciting than a basic spread bet, but sometimes it's best just to keep it simple.

The Knicks look horrendous right now. They couldn't score on a Nerf hoop and their defense is sliding more by the week. We're getting a very fair spread to back the league's best team on a night that, narrative-wise, already screams Warriors, adding distraction to the Knicks' constant media pressure-cooker in what's already looking like a lost season.

The matchup is dubious at best for the Knicks, with RJ Barrett and even Grimes now in health & safety protocol, this media circus could turn into a blowout in short order.

Did you know that if you parlayed today’s NBA Warriors vs. Knicks predictions and picks in a single-game parlay, you could win $26.45 on a $10 bet? 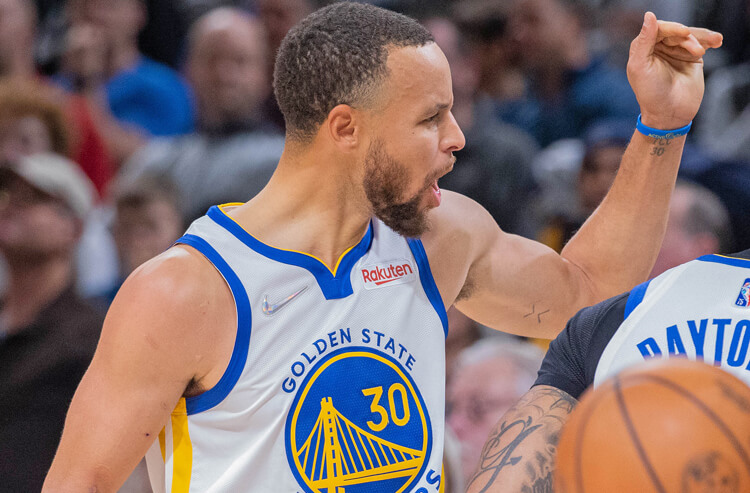