Pelicans vs Jazz Picks and Predictions for January 19

The Utah Jazz are fresh off a revenge spot in Denver and try to extend their winning streak to six games when they host the New Orleans Pelicans on Tuesday night.

The Jazz, who have covered in each of those past five victories, opened as 6.5-point NBA betting favorites but the spread has dropped half a point to Utah -6 as of Tuesday morning. Utah won three of the four meetings with New Orleans last season, going 2-2 ATS.

These are our NBA free picks and predictions for Pelicans vs. Jazz on January 19.

The Under is 5-2 in Pelicans’ last seven road games. Find more NBA betting trends for Pelicans vs. Jazz.

Utah opened a 6.5-point favorite, and two hours out from tipoff, the Jazz are -6 at PointsBet USA. The Pelicans are actually taking 53 percent of point-spread tickets and 74 percent of spread dollars. The total is down to 217.5 from 218.5 on two-way action, with 51 percent of bets/56 percent of money on the Over.

Utah returns home for just the second time in the past nine games, still picking pieces of the Nuggets out of their teeth after exacting some revenge for last year's postseason collapse versus Denver.

The Jazz continued to clamp down defensively Monday, handcuffing the Nuggets to only 105 points on 40 percent shooting. They’ve allowed only 97.6 points per contest during this winning streak but have played some weaker opponents in Atlanta, Cleveland and Detroit—which has helped pad those defensive stats.

The Pelicans continue to grow into their new system under head coach Stan Van Gundy. New Orleans has suffered through some growing pains early in the schedule but showed progress with a 128-point effort in a win over the Sacramento Kings on Monday, snapping a four-game losing skid thanks to a 31-point eruption from Zion Williamson (13 for 15 from the floor).

The offense looked much more in rhythm and better spacing helped the Pelicans shoot 53 percent from the floor, including 11 for 22 from beyond the arc. New Orleans had six players score in double figures, Eric Bledsoe among them. The high-profile offseason addition had a season-high 21 points after an inconsistent start to the 2020-21 campaign.

Another backcourt weapon will be in the mix for NOLA Tuesday with point guard Lonzo Ball returning. Ball, who has missed the past three games with a sore knee, practiced in full on Monday and is expected to be back in the starting lineup. Ball is averaging over 12 points with more than four rebounds and four assists per game.

With the Jazz running the risk of a letdown spot off a huge win in Denver (and a long road stretch) and New Orleans find it’s footing on offense, we like the 6-point pup Tuesday night.

No team in the NBA has gone through as drastic a shift in pace as the Pelicans. Last season, under coach Alvin Gentry’s “shoot’em all and let God play defense” system, New Orleans tied for the second-fastest pace in the league (106.3). In a dozen games under Van Gundy, that pace has downshifted to the fifth-slowest pace (100.1) and meets a Jazz offense just below them at 100.9.

Utah has smothered opponents during its recent winning streak, namely rival backcourts, locking down opposing guards to only 44.7 points per game and limiting the position to less than 27 percent shooting from beyond the arc.

The Pelicans do have some scoring talent at guard – notably the emergence of Nickeil Alexander-Walker during Ball’s absence (averaged 19.7 points in three starts) – but aren’t reliant on the 3-ball to compete. New Orleans will be happy pounding it inside to Williamson, Steven Adams and Brandon Ingram, with that trio pushing NOLA to 10th in average points in the paint per contest (48 per game).

Two slower tempos and a physical fight in the interior have us looking Under the 218-point number.

New Orleans presents one of the toughest starting frontcourt trios in the NBA, with Zion, Ingram and Adams boasting plenty of beef under the basket. That’s a big reason why the Pelicans are one of the top rebounding teams in the NBA, sitting fourth in total rebounds and first in rebounding percentage.

That makes for a long night for Utah center Rudy Gobert, who pulls down an average of 13.3 boards per game and has Utah No. 3 in rebounding percentage on the season. Gobert is coming off a strenuous matchup in Denver, tasked with slowing down Nuggets versatile big Nikola Jokic, who dropped 35 points in the loss to the Jazz. Gobert finished with 15 points and 13 rebounds in the win.

If New Orleans’ shooting touch can pick up where it left off against the Kings and continue to crash the glass with those three stars, there might not be enough rebounds to go around. We’re calling for a quieter night on the boards for the Frenchman. 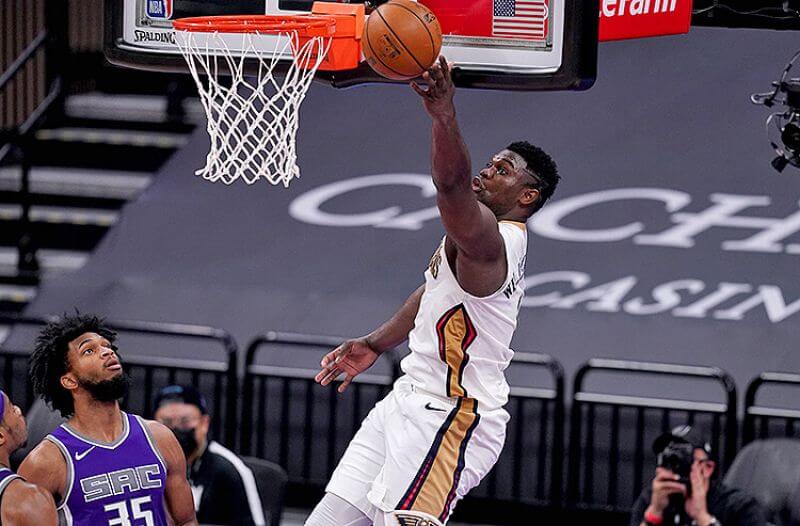 Pelicans vs Jazz Picks and Predictions for January 19
Provided by