Atlanta and New York have both underwhelmed this season, and now the Bockers are grasping at straws to keep their season alive. See why we don't think it'll happen against Trae Young with our Hawks vs. Knicks picks.

Less than a year ago, these two were pitted in a bitter, heated 4-vs-5 opening-round playoff matchup. Now, New York is lottery bound while ATL clings to the last play-in spot.

Find out who can salvage tonight with our Hawks vs. Knicks NBA picks and predictions for March 22.

(Editor's Note: This preview was published prior to Tuesday's news that Julius Randle is out tonight for the Knicks.)

The Knicks are 1-7 ATS in their last eight home games. Find more NBA betting trends for Hawks vs. Knicks.

Hawks vs Knicks picks and predictions

The Hawks and Knicks seem linked at the hip. While both largely exceeded expectations in 2021 and mirrored each others' rise up the standings, both have hit the skids this season after their memorable playoff showdown, sitting 10th (Atlanta) and 12th (New York).

The Knicks are effectively dead in the water, five games back of Atlanta for the last play-in spot with 11 remaining. Does a team as inconsistent as the Knicks have enough in them for a hail mary?

While the smart money should be for the Knicks to favor tanking for a shot at some intriguing low-cost talent after a lost season, this wouldn't be the first time they've acted against self-interest.

This game becomes a question of styles, and whether bettors buy into the Knicks' newfound effort of defense, ranking fifth in the NBA over the past 15 games. Such a unit could hope to contain Atlanta's scorching offense, third in the league over that same sample.

While John Collins handicaps the Hawks' interior scoring, they're more than equipped with guns on the perimeter to compensate for his absence, led by Trae Young, who's made it a personal mission of his to anger New York fans as much as possible.

Young's going to get up for this game, particularly when he can put a pretty firm nail in the Knicks' coffin this season, while his own team's fate hangs in the balance. Especially given the rivalry, we should see a playoff-type atmosphere tonight.

That may not bode well for the Knicks, especially on national TV in front of a Garden crowd that can turn on them at a moment's notice. Just ask Julius Randle, who's returned to his hit-or-miss ways on offense after a stretch of seven straight 28+ point games in February.

Atlanta's an awful defensive team (27th on the season), but the Knicks' 24th-ranked offense isn't potent enough to punish the Hawks, especially if Randle has an off night (which isn't entirely unlikely with De'Andre Hunter marking him and Clint Capela helping at the rim).

Atlanta has the higher ceiling as a team, should be more motivated, and the best player on the court wears its jersey. We can never rule out Knicks self-sabotage at the Garden — give us the Hawks.

This total almost seems like a bit of a trap given who's playing. The Knicks and Hawks combine to score 218.9 ppg while, bizarrely, allowing the exact same mark.

This 227 total thus suggests that books are expecting (or at least expecting us to expect) some fireworks based on a string of recent high-scoring outings by Atlanta, and frankly, we're not buying it. Six of the Hawks' last seven games have been bloated, playing against fast-paced, offense-minded teams (Charlotte, Memphis, New Orleans), teams that have stopped playing defense (Milwaukee, Indiana), and a G-League roster (Portland).

Despite its great offense, this Hawks team prefers a methodical pace (18th in NBA this season) and will be enabled by a Knicks squad that plays at the league's third-slowest speed. To boot, New York sure as shit knows it isn't winning a shootout tonight, and will be incentivized to dig in on defense and slow this game as much as possible.

Atlanta turns the ball over less than any team in the NBA, and the Knicks are above-average in that department (12th), meaning fewer transition opportunities and a lot of half-court grinds that bleed the clock, exacerbated by the Knicks' full engagement on D and occasional inability to put the ball in the hoop.

With the pseudo-playoff-type atmosphere, this rivalry could generate tonight, there could be an extra layer of nerves to overcome, especially in front of the volatile MSG crowd. Expect a few more bricks and a slightly slower tempo, making it tough to back an Over here.

Clint Capela's scoring definitely hit the skids last month, but with Collins out, he's taken on a heavier load.

This isn't a dream matchup for Capela, with a defense-first team playing at a snail's pace, but there's still plenty of opportunity for him to produce.

Clint figures to be the prime beneficiary of the defense collapsing on Young, particularly if Trae gets into floater range at will (which is likely) and prompts Mitchell Robinson to contest in the mid-range.

Overall, Capela's been scoring with enough consistency with Collins out that we like this bet at slightly-better-than-even.

Did you know that if you parlayed today’s NBA Hawks vs. Knicks predictions and picks in a single-game parlay, you could win $63.62 on a $10 bet? 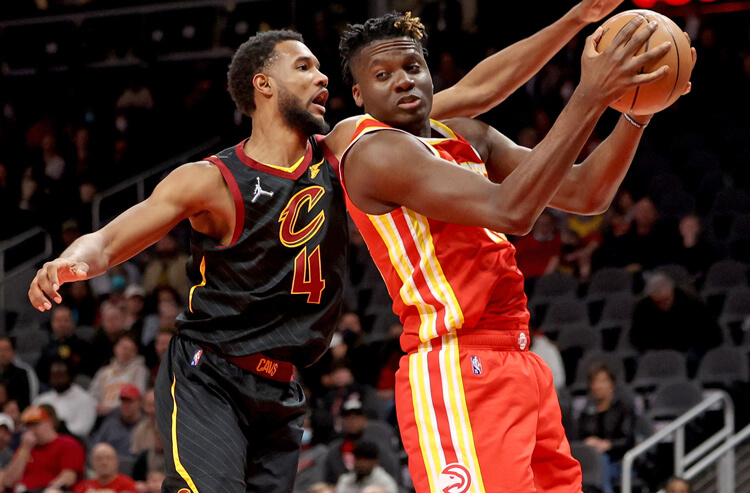