Scrappy L.A. presents a tough matchup for Denver, with a big to body the reigning MVP, and a swarming defense around him. Find out why this game should be closer than the spread suggests with our Clippers vs. Nuggets picks.

On Tuesday, the Denver Nuggets host the Los Angeles Clippers in what should be a really close game. These teams have met three times already this season, and only seven total points separate those games’ outcomes.

Will Nikola Jokic & Co. get the job done at home? Keep reading our Clippers vs. Nuggets NBA picks and predictions for Tuesday, March 22 to find out.

The Nuggets opened as 6.5-point favorites against the Clippers in this game, and the line hasn’t yet moved. The total, however, is starting to move up a bit. It opened at 219.5 and is up to 220 in some places.

Nuggets are 1-5 against the spread in their last six games as favorites. Find more NBA betting trends for Clippers vs. Nuggets.

Clippers vs Nuggets picks and predictions

There might not be a team in the league that buys into its coach’s vision as much as the Clippers, which is why the team has a solid record despite missing its two best players. Since Ty Lue became the head coach of the Clippers, the team is 29-16-1 against the spread when playing teams that shoot 46% or better from the field in the second half of the season.

With that in mind, you shouldn’t be surprised if Los Angeles finds a way to slow down Denver — especially with the team having had three days off since a blowout loss against the Utah Jazz. This squad is eighth in the league in defensive rating this year, so when you factor in the time off, it should be a great defensive performance here.

Look for Ivica Zubac to be a huge factor in this game. The Clippers center isn’t going to out there and outplay Nikola Jokic, who is potentially looking at back-to-back MVP awards, but the Croatian is going to battle nonstop in this one. Zubac works extremely hard on the glass and just plays a physical brand of basketball. He’s averaging 10.2 points, 8.4 rebounds and 1.0 blocks per game this year, and the hope for Los Angeles will be that he can tire out Jokic in this one.

The Nuggets rely on Jokic to do so much on the offensive end that he really can’t afford to get himself into a slugfest in the paint. But that’s exactly what Zubac is going to be hoping for. Also, while Jokic had 49 points the last time these teams met, Zubac had 32 on 15-of-19 shooting. He kept his battle with the MVP close and that’s all the Clippers need.

Los Angeles should also be able to get some good play out of Reggie Jackson in this one. Before scoring just seven points against the Jazz last game, Jackson had scored at least 23 points in three of his previous four contests. He’s a really good outside shooter and plays at a nice pace.

Jackson will also have a size advantage over whoever ends up guarding him on the Nuggets, and that’s going to allow him to calmly shoot over his defender. There’s a reason he had 28 points and 12 assists the last time these teams met, and he could go off once again.

The Under had hit in four straight between these two before they combined to score 258 points in Denver on January 19. They did, however, score 30 points in overtime in that one, so it wasn’t quite as high scoring as it seemed.

It’s also worth noting that the Under is 8-1-1 in the last 10 Clippers road games. On top of that, the Under is 18-7-1 in the last 26 games which the Clippers have played after a loss by 10 or more points. And considering they’ve had plenty of time to sit on that loss, they’re only going to be more eager to go out and shut down the Nuggets here.

The Under also happens to be 8-3 in the last 11 games that Denver has played against teams with losing records.

As previously mentioned, the Clippers should have some good energy after having last played on Friday. Look for them to fly around on defense in this one, and Jackson is no exception to that. Los Angeles needs him to be locked in when this game tips, and he knows how important his play is to this team.

Jackson, who had been on a tear before a lousy outing against the Jazz last game, has now recorded a steal in four of his last five games. He also had two in a win over the Detroit Pistons just nine days ago, so it’s not uncommon for him to stuff the steals column.

Jackson is averaging 0.7 steals per game this year, so he records one more often than not and we like him to do it here. This game should be a hard-fought battle, so there should be quite a few scrappy plays here.

Did you know that if you parlayed today’s NBA Clippers vs. Nuggets predictions and picks in a single-game parlay, you could win $50.91 on a $10 bet? 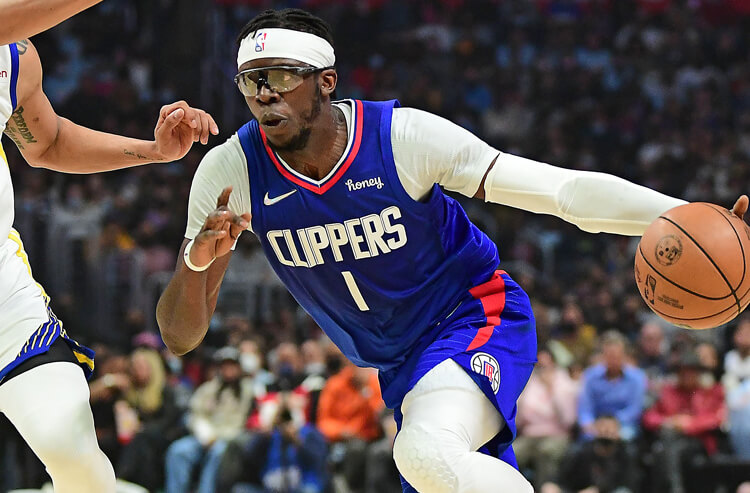 Clippers vs Nuggets Picks and Predictions: Reggie Shines in Clippers Cover
Provided by