With Steph Curry sidelined, it makes sense to take Orlando with the 7.5 points at home, but our NBA betting picks and predictions break down why Draymond Green's return combined with Orlando's dreadful offense makes betting Under the best play.

The Golden State Warriors try to snap out of a two-game skid as they head to the Amway Center on Tuesday night to take on the Orlando Magic.

In a matchup between one of the best teams in the NBA and one of the worst, the championship-contending Warriors come in as 7.5-point road favorites despite missing superstar guard Stephen Curry.

This line hit the board with the Warriors installed as 8.5-point favorites with the Over/Under at 215. Early money has come in on Orlando and the Over, shifting the line to Golden State -7.5 with the total ticking up to 216.5 or 217, depending on the book.

These teams previously faced off on December 6, with the Warriors winning 126-95 as 15.5-point home favorites.

The Warriors are 2-6-1 ATS in their last nine games versus teams with a losing record. Find more NBA betting trends for Warriors vs. Magic.

Warriors vs Magic picks and predictions

The Golden State Warriors have the third-best record in the NBA at 47-24 but continue to deal with injury issues. They finally welcomed back defensive anchor Draymond Green last week after a two-month absence only to see All-NBA guard Stephen Curry depart the lineup with a sprained foot.

Curry injured his foot after just 14 minutes of action in last Wednesday's 110-88 loss to the Celtics and the Dubs dropped Sunday's contest to the Spurs without him. Even with Curry, the Warriors had been showing cracks in recent weeks, going 2-9 straight up and against the spread in an 11-game span from February 9 to March 7.

To be fair, the Magic are still far worse, having the second-worst record in the league (19-53) but they are coming off a 90-85 win against Oklahoma City. Orlando will be without shooting guard Jalen Suggs who has an injured ankle, but it won't be much of a downgrade to fellow rookie R.J. Hampton. Suggs is dynamic and flashes his potential but he's also maddeningly inconsistent and shoots just 36.1% from the field.

As bad as the Magic are, they have gone a somewhat respectable 11-14 over the last two months (13-12 ATS). And while they are still more than capable of getting embarrassed on any given night (see last week's 42-point loss to the Nets) they've also been very competitive recently against playoff-caliber teams like the 76ers, Timberwolves, and Suns.

The Dubs are clearly the superior team in this matchup but given their recent play and the absence of Curry, it's tough to trust them as 7.5-point favorites on the road. With Golden State going just 3-10-1 ATS in its last 14 games as a fave, we'll take Orlando with the points.

When the Warriors lost Green to a back injury on January 5, their defensive play clearly took a few steps backward. At the time of his injury, the Dubs were holding foes to just 101.4 points per game on 42.5 FG% — the best numbers in the league.

With Green injured, those numbers fell to 109.1 ppg on 45.1 FG% but with the six-time All-Defensive team member back in the lineup, the defensive intensity will ramp up even if it does get him in trouble with the refs at times.

The Dubs will need a better effort on defense because they have to make up for the loss of Curry and his 25.5 ppg. Thankfully, it shouldn't be a huge task to contain an Orlando squad that ranks 29th in the league in offensive rating and managed just 90 points in Sunday's win against the Thunder.

The Warriors were one of the most reliable Under bets in the league earlier in the season before Green was sidelined.

With Green back in the lineup and their best offensive player in Curry sidelined, there should be value in betting Golden State unders again until odds adjust. Especially in a matchup like this against one of the worst offensive teams in the league.

It's little surprise that both of these sides are 5-1 to the Under in their last six games and that's where we're leaning with our best bet in this one.

Did you know that if you parlayed today’s NBA Warriors vs. Magic predictions and picks in a single-game parlay, you could win $26.45 on a $10 bet? 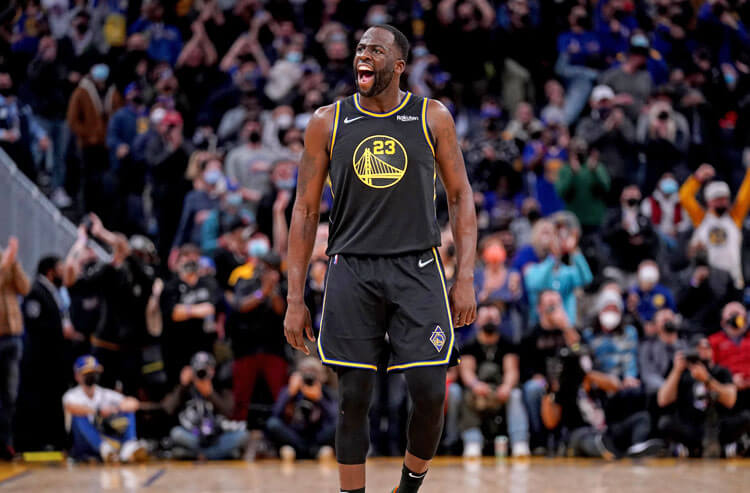