NBA Coach of the Year Odds: Brown Conquers with Kings

Mike Brown's done a lot more than oversee an improvement with the Sacramento Kings — he's defying nearly two decades of organizational incompetence. It's got him within striking distance of the NBA Coach of the Year odds lead.

NBA Coach of the Year rewards the bench boss who steers his team through adversity or exceeds expectations for the regular season.

Heading into September, Boston Celtics coach Ime Udoka was the consensus NBA odds favorite to take home the honors, but after his preseason suspension, it's his replacement, Joe Mazzulla, who's got the Celtics in peak form as we're into the season's second half.

However, Mazzulla now has plenty of company atop the board in what's shaping up to be a close race. Let's take a look at the latest NBA Coach of the Year odds, and which contenders are making a lasting impact.

Odds to win NBA Coach of the Year

Odds courtesy of DraftKings Sportsbook as of February 2, 2023.

2/2/2023: Few of the COY contenders' teams have been without blemishes lately:

The Celtics recently lost three straight. The Grizzlies have lost six of seven. The Nets are seriously struggling without Kevin Durant. And the Pelicans have been free-falling down the West standings all month — taking Willie Green's formerly-strong COY odds along for the ride.

An apparent exception is Mike Brown, whose Kings are 7-3 in their past 10 games and now sit firmly in the West's No. 3 seed. They have the NBA's hottest offense (a scalding 122.4 rating over their past 15 games) and even with a league-median defense are simply running opponents off the floor.

It's a welcome sight in Sacramento, where the Kings are riding a 16-season playoff drought, but clear of the West's crowded glut, appear mortal locks to break that slump, barring serious injury.

1/17/2023: Joe Mazzulla still leads the field, with Boston now righting the ship after a brief skid, winner of seven straight and now 4.5 games clear of second-place Brooklyn in the East. The Celtics still own the league's best net rating, and Mazzulla getting a quick response from his troops after their deflating blowout loss to OKC has helped his case, keeping Boston focused through the January doldrums.
Speaking of Brooklyn, the Nets' charge up the East standings was halted by Kevin Durant's recent injury — likewise stalled, for now, has been coach Jacque Vaughn's bid to challenge Mazzulla for top COY odds, still a close second at +320.
1/3/2023: Joe Mazzulla continues to pace the COY field with just under half of the regular season played. Despite some stumbles to close the 2023 calendar year, the Celtics still own the league's best record and net rating, which is all the more impressive given the mere weeks Mazzulla had to prepare for an NBA head coaching role. Elsewhere, the biggest mover on the board has been the Nets' Jacque Vaughn, who also took over on short notice, following Steve Nash's prompt dismissal. The Nets have won 12 straight and have the entire league taking notice, which is huge of Vaughn's narrative after a disastrous start in Brooklyn.
12/6/2022: Mazzulla's managed to perhaps even exceed the Boston Celtics' preseason expectations, steering them to the league's best record with their offense, surprisingly, easily No. 1 in the NBA. The Celtics are inching ahead of the field as NBA championship odds favorites, and look to welcome back defensive lynchpin Robert Williams III soon. Elsewhere, Mike Brown and Rick Carlisle continue to keep their names in the discussion with the stunning success of the Kings and Pacers, while Willie Green also vaults near the top of the board on the heels of the Pelicans' four-game win streak, currently second in the West at 15-8. 11/22/2022: The Celtics are streaking and Mazzulla's preseason narrative is only strengthening his case as a Coach of the Year candidate. With Boston atop the NBA at 13-4, its surprise coach has overtaken the top COY odds spot, with several veterans surging behind him.
With the Pacers and Kings surprisingly in the thick of each conference's playoff race, Rick Carlisle (+1,000) and Mike Brown (+1,200) have both seen their odds shorten hugely in the past week, now among the second tier of contenders chasing Mazzulla and his former bench mate — Utah's Will Hardy (+400).
11/9/2022: The Jazz are unfathomably first in the West at 9-3, and rookie head coach Will Hardy deserves lots of the credit considering his team came into the season with zero identity, little if any continuity, and a fairly transparent mandate to tank. Hardy sat as last week's new odds leader, but his price has only shortened with the Jazz's continued success.
Elsewhere, it was widely rumored last week that Ime Udoka's hiring by the Nets was imminent, but the continued PR fallout from the Kyrie Irving antisemitism debacle has forced Brooklyn to pump the brakes and instead name interim coach Jacque Vaughn as their new bench boss, installed at +2,000.
11/2/2022: With the Jazz surging against every preseason expectation, Will Hardy leapfrogged to the top of the COY odds board (+850). But his odds movement lurked under the headlines coming out of Brooklyn that suspended Celtics head coach Ime Udoka would be hired by the Nets in the wake of Steve Nash's firing. The preseason Coach of the Year odds leader thus re-entered the race at +1,000.

Most sportsbooks will display odds in the American format as listed above. We'll use 2019-20's Rookie of the Year race as an example:

NBA Coach of the Year trends

NBA Coach of the Year history

Don Nelson, Pat Riley, and Gregg Popovich are all tied as three-time winners.

No coach in the award's sixty-year history has won in consecutive seasons. 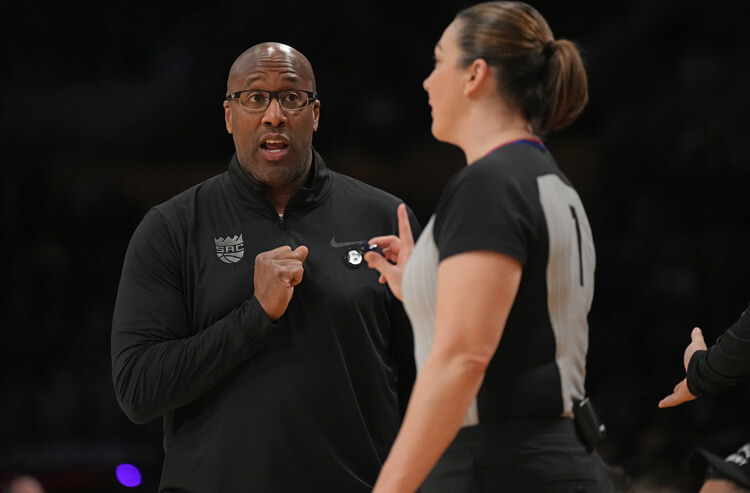 NBA Coach of the Year Odds: Brown Conquers with Kings
Provided by