Consecutive second-half comebacks have put the Hawks on the verge of advancing in the NBA Playoffs. Can Trae Young and Co. take care of business in Atlanta? Check out our 76ers vs. Hawks picks and predictions.

NBA games are 48 minutes, something the Philadelphia 76ers have had to learn the hard way after blowing back-to-back second half leads to the Atlanta Hawks in their Eastern Conference semifinal.

After choking away an 18-point cushion in Game 4 of this series, the Sixers went supernova and collapsed in on themselves and a 26-point lead in Game 5 Wednesday, setting up a do-or-die matchup in Atlanta for Game 6. Despite two straight crushing losses, Philadelphia is a 3-point NBA betting favorite on the road Friday.

Check out our free NBA picks and predictions for 76ers vs. Hawks on June 18.

William Hill US opened Philadelphia as 3-point chalk Thursday morning, quickly moved to -2.5, then a half-hour later returned to -3, where the line remains at 4:45 p.m. ET today. The 76ers are attracting 61 percent of spread bets and 70 percent of spread money. "Right now, we’re slightly high on the Sixers, but nothing major," WillHill director of trading Nick Bogdanovich said. "The sharps bet that line up from 2.5 to 3, that was all professional money. A lot of people might end up playing Sixers first half, since they seem to get a lead no problem, but holding it is another story." The total bounced from 222.5 to 221.5 to 223, with 52 percent of tickets/64 percent of money on the Under.

The Hawks are 20-6 ATS in their last 26 home games. Find more NBA betting trends for 76ers vs. Hawks.

Fool me once. Shame on you. Fool me twice… well, count me among the jaded NBA playoff bettors who doubled down on the Sixers in Game 5, after they were outscored 54-38 in the final 24 minutes of Game 4. I even joked to myself, with Philly holding a 62-40 halftime lead Wednesday, “OK Sixers, time to shit the bed again.”

That self-fulfilling prophecy is a tough pill to swallow and has many basketball gamblers finding it impossible to trust this team with the series swinging back to Atlanta, and a dangerous Hawks squad setting up camp inside the fragile minds of Philly’s finest.

Championship-calibre teams can put those types of losses in the rear-view, but it appears the young 76ers have a fundamental flaw and suffering two defeats in this fashion may be too much for a roster that lacks true veteran leadership. This is the NBA’s version of the yips and it will only be compounded on the road in Game 6.

Atlanta is one of the best home courts in hoops and Hawks backers have reaped the benefits, with the team boasting a 26-14 ATS mark inside State Farm Arena this year, including a 4-1 ATS count in its last five as home underdogs.

The Hawks’ move to a bigger lineup, more specifically utilizing versatile 6-foot-10 forward Danilo Gallinari more, seems to be solving some of the size issues that bothered Atlanta in the opening games of the series. Gallinari played more than 30 minutes in Game 5, with 16 points and eight rebounds. He’s not the best defender but his length at least keeps the Sixers honest.

Fatigue has become the biggest factor in the last two games, with the plug getting pulled on the Philadelphia attack in the final 24 minutes of action. The 76ers have scored second-half totals of 44 and 38 points, weighed down by the late-game struggles from Joel Embiid. The All-Star center is just 3 for 21 from the field for a collective 17 points in the last two second halves.

The longer this series goes, the worse it’s going to get for Embiid’s busted knee and Philadelphia overall. Atlanta, on the other hand, has proven it won’t quit – no matter the score – and is made for the postseason grind, boasting seven players averaging 9.5 points or more in the playoffs and a bench chipping in with almost 35 points a night.

Under bettors have thrived on the 76ers’ second-half no-shows in the past two games, staying below totals of 226.5 and 223.5. Bookies aren’t playing around with the Game 6 number, posting the total at 222.5 and quickly moving it down to 221 with early play on the Under.

The Hawks are certainly better moving the basketball, as we saw with their split in assists in Game 5. Atlanta was locked down to just three assists in the first half but chalked up 11 in the final two quarters, including six in a 40-point fourth quarter, as it made Philadelphia work harder on defense.

That once-mighty Sixers stoppage has buckled under the Hawks’ bountiful offensive options, owing an advanced defensive rating of 128.1 in the second half of the past two games. If Philly wasn’t already tired, it now has to travel and play a short turnaround in Game 6.

There have been plenty of points left on the table in this series and both teams have gotten to the line, with a total of 275 foul shots awarded – the most of any conference semifinal series this postseason. The crappy thing for Over bettors is that Philly has made just 101 of those freebies (65 percent) – the same amount as Atlanta which has had 35 less tries.

Usually, lots of foul shots means scoring with the clock stopped (always good for Overs) and after the team went 23 for 38 from the stripe in Game 5, you can be sure Ben Simmons & Co. (who shot 75.5 percent FT for the year) will be getting some extra free throw reps in before Game 6.

I will not stop playing Over on Seth Curry 3-point props.

The Sixers’ rifleman once again topped his total for triples in Game 5, sinking 7 of 12 looks from beyond the arc. It was the seventh time in 10 postseason games in which Curry has made at least three triples. He’s shooting 57 percent on 3-pointers for the series and almost 48 percent from deep for the playoffs.

There’s bound to be some overreaction to his seven splashes and 36 points in Game 5, so make sure you shop around for the best price on this prop. It’s been steady at 2.5 O/U for the first five games of the series with the vig ticking past -130. 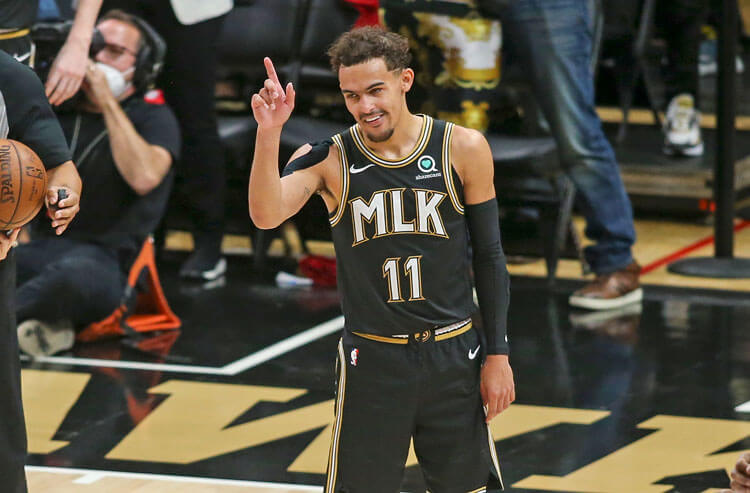 76ers vs Hawks Game 6 Picks and Predictions: Put On Ice
Provided by