A sensational performance by Paul George powered the Kawhi-less Clippers to a Game 5 win at Utah and a chance to close out the series at home in L.A. Our NBA picks for Game 6 like Playoff P to shine again as the Clips get the job done.

The Los Angeles Clippers have a chance to close out the Utah Jazz and advance to the Western Conference Finals with a win at the Staples Center in Los Angeles on Friday, June 18.

Despite being without star Kawhi Leonard, the Clippers managed to win Game 5 on the road but a slight NBA betting underdogs at home for tonight's contest.

Can Utah find a way to extend the series and send it back to Salt Lake City for a Game 7? Keep reading our Jazz vs. Clippers NBA picks and predictions, with tip-off at 10:00 p.m. ET, to find out.

BetMGM Nevada opened Utah a 2-point favorite Thursday morning, dropped to -1 by Thursday night, then by lunch hour today returned to -2, where the line sits at 7:30 p.m. ET. "Tickets are 2/1 in favor of the Jazz, but money is running about the opposite, 2.5/1 in favor of the Clippers," BetMGM Nevada's Scott Shelton said. The total is up to 221 from a 218.5 opener for Game 6. "Roughly 2.5/1 tickets on the Over, and money is running 9/1 on the Over," Shelton said.

The Clippers are 5-1 ATS in their last six games as home underdogs. Find more NBA betting trends for Jazz vs. Clippers.

Led by 37 points, 16 rebounds, five assists, two blocks (and a partridge in a pear tree) from Paul George, the Clippers were able to earn a 119-111 victory over the Jazz in Game 5. Los Angeles did that without Kawhi Leonard and in a very hostile environment at Vivint Smart Home Arena.

Now, the Clippers will look to win a fourth straight game in this series, and they have to be feeling pretty good about their chances of doing so.

In Game 5, Bojan Bogdanovic was scorching hot from the outside, shooting 9 of 17 from behind the three-point line. Don’t expect the Utah wing to repeat that performance tonight, as he scored just 27 total points in Games 3 and 4 in LA. Bogdanovic hasn’t had the same confidence on the road, which also was true in the regular season when his shooting percentages were a tick lower away from Salt Lake City. He’s such a big part of the Utah offense that a dip in performance will make it harder for the team to win.

The Jazz also haven’t gotten the same version of Donovan Mitchell over the last two games. The young star tweaked his ankle earlier in this series — an ankle that was a problem to begin with — and he has now shot only 15 for 45 from the floor and 10 for 29 from deep over the last two games. Mitchell should flirt with 30 or so points in a must-win game for Utah, but what's key is that he does so efficiently — and with the way he's moved over the last few games, it’s highly unlikely he’ll be able to do so.

Los Angeles obviously has some problems of its own, as the team will now be looking for back-to-back wins without Kawhi Leonard, who is arguably the best two-way player in basketball. But George was able to rise to the occasion in Game 5 and the Clips have also had a number of other guys come up in the clutch, with Reggie Jackson being the one that stands out the most. The 31-year-old guard had 22 points in Game 5 and is now up to 15.8 points per game in the playoffs.

This would definitely be a somewhat surprising outcome, as the Jazz were the best team in basketball during the regular season. The issue is that Los Angeles has completely changed this series by going small, as that has minimized the impact of Rudy Gobert. The Jazz have not been able to stop the Clippers, and it’s going to be harder for them to do so in front of a fired-up crowd at Staples Center.

The Jazz and Clippers went over this mark in Game 5 but look for tonight to be a bit different.

With Utah on the brink of elimination, the team is likely to be a lot more focused on the defensive end. The Jazz should also be somewhat tense offensively, which will lead to a couple more missed shots.

Meanwhile, the Clippers were excellent offensively in Game 5 but the Jazz did figure them out a little towards the end. Overall, this should be more of a slugfest, now that we're finally in an elimination game.

At this point, it’s hard to go away from George’s point total. "Playoff P" has certainly gotten his fair share of hate for his postseason performances over the years, but the superstar has delivered throughout these playoffs.

After scoring 31 points in Games 3 and 4, George turned in a 37-point performance on the road in a pivotal Game 5. He served as the go-to player for the entirety of that game, and that isn’t going to change tonight.

George is likely to see at least 40 minutes of action in this game, and his team is going to need him to show out in order to send the Jazz home. Utah has not had an answer for his ability to score at all three levels, and he’s taking advantage of the extra spacing that going small provides. 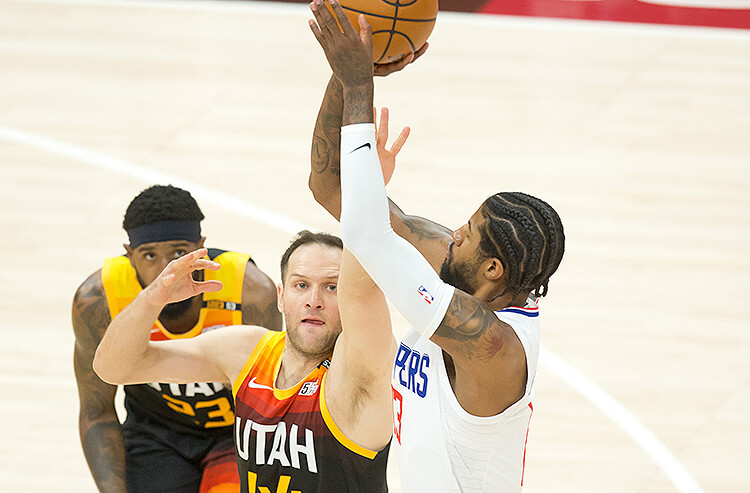