The Red Sox are going for their second straight sweep of the Yankees but will need to get through Gerrit Cole to do so. As New York is just 4-5 in Cole's last nine starts, the Boston ML is tempting... but so is the +1.5 runline.

The Boston Red Sox will be looking for the three-game sweep of the New York Yankees Sunday in front of a packed Fenway Park but will have to get past the AL Cy Young frontrunner in Gerrit Cole to do so.

The Red Sox have won all five matchups this season against the Bombers and could use another victory as they trail the Rays by half a game for the AL East lead.

The Yankees opened as -156 MLB betting road favorites with Cole on the mound with a total of 8.5 tilted to the Over.

Here are our free picks and predictions for Yankees vs. Red Sox on Sunday, June 27, with first pitch tabbed for 1:10 p.m. ET.

With Gerrit Cole toeing the slab, New York opened a -162 favorite Saturday night at FanDuel, but receded to -144 this morning. As of 11 a.m. ET, the Yankees are taking 72 percent of tickets and 84 percent of cash on the moneyline, with bettors expecting New York to dodge the weekend sweep in Boston. The total opened at 8.5 flat (-110) and is now up a full run to 9.5 (Under -120), with 59 percent of bets on the Under, but 76 percent of money on the Over.

Gerrit Cole (8-3, 2.33 ERA): Cole is currently the frontrunner for the AL Cy Young award and while he doesn’t lead many AL categories, the right-hander is in the Top 4 in pretty much every statistical category and leads the pack in wins and WAR. The Yankees’ pitcher has allowed more than two runs just once over his last six starts and has given up just seven hits over his last 15 innings. Cole has yet to see Boston this year but threw seven innings of one-run ball against the Red Sox last year.

Eduardo Rodriguez (5-4, 6.07 ERA): Coming off arguably his best start since April, where he pitched six frames and gave up five runs (three earned), it was the first time that the lefty has made it through the fifth inning since May 12. Rodriguez has seen his ERA balloon from 3.82 to 6.07 over a matter of seven weeks and although the K/BB ratio has been fine, batters are hitting .294 and have a 35.1 percent hard-hit rate against him. He has seen the Yankees once this year and gave up three runs (one home run) over 5 1-3 innings of work.

The Yankees are 0-6 SU in their last six meetings against Boston. Find more MLB betting trends for Yankees vs. Red Sox.

The home side took the opener on Friday by a final score of 5-3, thanks to a solid bullpen performance, and then followed that up with its fifth-consecutive win this season over New York on Saturday night. If the Red Sox want the sweep — and send nearly 40,000 fans home happy — they’ll have to do it against Gerrit Cole.

Cole has yet to play the Red Sox this year and only saw them once in 2020. He comes into the rubber match having been solid over his last three starts despite his decrease in spin rates. Cole has silenced some decent offenses over his last three starts and has allowed just six runs and 12 hits over his 21 innings. Cole is making the no-tack adjustment better than other pitchers.

However good Cole has been, the Yankees have not been an automatic winner when he starts. New York is 4-5 SU in Cole’s last nine starts, and of those five losses, New York’s opponents paid out anywhere from +180 to +240 — this has us taking a long look at the home side for +140.

The Red Sox are a perfect 5-0 SU against the Yankees this year and already have a three-game sweep under their belt. Their playing in a packed Fenway Park, which is bringing new energy to the city and Boston has been near-impossible when they can scratch across four or more runs. On the year, the Red Sox are 41-4 SU when they pass that threshold.

Even if Cole is on his game, Boston has shown in this series that they can get to the AL’s No. 2-ranked bullpen if needed. Boston worked Albert Abreu for two hits and a run yesterday and scored an eighth-inning run off Zack Britton on Friday.

The Yankees, on the other hand, have seen 6 2-3 innings from the Boston bullpen and have managed five hits and a single run. If Boston starter Eduardo Rodriguez can’t get deep, the Yankees could see the same bullpen rotation as Friday, where Boston threw out four pitchers and got 5 1-3 innings of scoreless ball.

Rodriguez is the bigger question mark here but New York has struggled to score against Boston, despite the offense heating up. Through five meetings the Yanks have scored more than three runs just once and the last series was just three weeks ago.

To cover ourselves against Cole, however, we’re backing out of the ML and instead, taking the +1.5 runline — which is priced beautifully at -115.

This total opened at 8.5 but has since found its way to a flat 9. The Under is 9-6 in Cole’s 15 starts this year, especially away from Yankee Stadium, where it has cashed in six of Cole's seven road starts.

The Boston bats aren’t coming in too hot to the series finale as the Red Sox found ways to score in yesterday’s 5-3 win. Boston had three sacrifice flies to go along with an RBI infield single Saturday and that’s all they needed for the victory. Boston sits seventh in the AL in wRC+ and has scored the eighth-most runs in the AL over the last 30 days.

The New York offense versus Rodriguez is the biggest angle for this total. New York sits 16th in OPS versus left-handed pitching this year and is just below average in run production with a 98 wRC+. The 28-year-old lefty has seen the Bombers 19 times over his career and has held his own with a 3.96 ERA and a 6-6 record. Plus Rodriguez comes into Sunday’s match having struck out seven or more batters in three of his last five starts.

Cole should set the tone for this game and keep the early scoring down. If Rodriguez can keep the ball in the park (he hasn’t allowed a multi-homer game over his last 11 starts) and the crooked numbers off the board, we could easily see another low-scoring affair at Fenway. New York is 1-4-1 O/U in its last six while Boston is 2-5 O/U in its last seven. 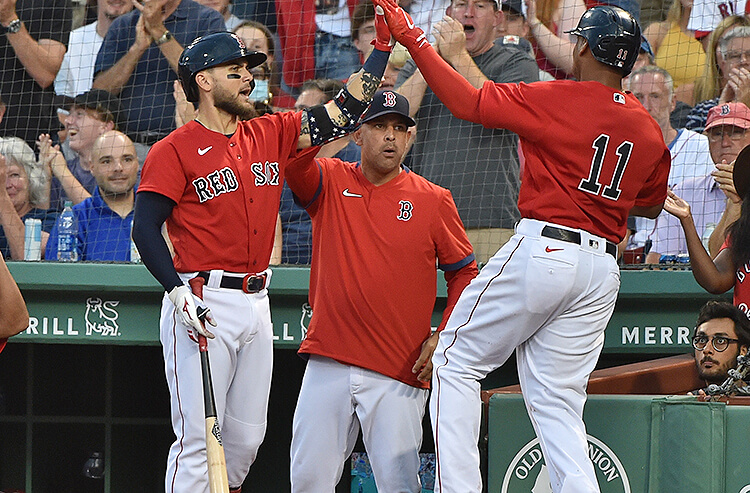