Today's best MLB prop bets are highlighted by two Cy Young candidates doing what they do best — shutting down opponents early — and is capped off by a struggling slugger continuing to flounder on Sunday Night Baseball.

Today, we're betting on one of the best pitchers in the game in Gerrit Cole, counting on the Diamondbacks to fall back to earth after finally snapping a road losing skid last night, and fading a struggling hitter on a struggling team.

Here are our best free MLB prop bets and predictions for Sunday, June 27, 2021.

It's been a brutal year for the New York Yankees, who came into the season with the second-best odds to win the World Series but are currently third in the AL East standings, six games behind the Rays and 5.5 games behind the Boston Red Sox.

They'll try to close that gap on their rival Red Sox today as they attempt to avoid a three-game sweep at Fenway. While the Yankees have struggled at the plate this year they've gotten the typical dominant play expected from ace Gerrit Cole.

This will be Cole's first outing against the Red Sox this year but he has made four starts against them since coming over to the American League in 2018, pitching to a 2.16 ERA and 1.00 WHIP with 30 strikeouts across 25 innings.

The BoSox are one of the better hitting teams in the majors but they have slowed down recently. As of May 27, they were leading the majors with an OPS of .767 but over the last month, that number has dipped to .719 — which ranks a modest 16th.

With Cole allowing two runs or fewer in 13 of 15 starts this season take the Under 2.5 on his earned runs total today.

The Arizona Diamondbacks finally snapped their 24-game road losing streak last night with a 10-1 rout over the Padres. But every dog has its day and oddsmakers are expecting them to get back to their losing ways this afternoon when they close out their series as +231 underdogs in San Diego.

The D-Backs are plating just 3.83 runs per game on the road this season and won't find it easy to generate offense against Padres starter Yu Darvish, especially at a pitcher-friendly field like Petco Park.

The Padres have the much better squad from top to bottom and despite last night's defeat are still 21-5 in their previous 26 games at home. Expect them to take care of business tonight and jump out to an early lead.

Cubs catcher Willson Contreras has been an integral part of Chicago's success this season but he isn't having a good year at the plate. The veteran is currently posting career-low numbers in both batting average (.230) and on-base percentage (.325).

Circumstances won't get any easier for Contreras today with the Cubs facing off against Dodgers stud Clayton Kershaw. Kershaw isn't having a great season by his lofty standards but he is still pitching to a 1.01 WHIP and holding opponents to a batting average of .219 through 15 starts.

The Dodgers also have a solid bullpen behind Kershaw with their relievers collectively posting a .218 OBA, good for fourth-best in the majors.

Contreras has scored a run in just two of his last 12 games and has scored in 25 of 69 games this season (36.2 percent of the time). With the Cubs currently struggling to drive in runs and the Dodgers having plenty of talented arms, this line seems more than a bit off. 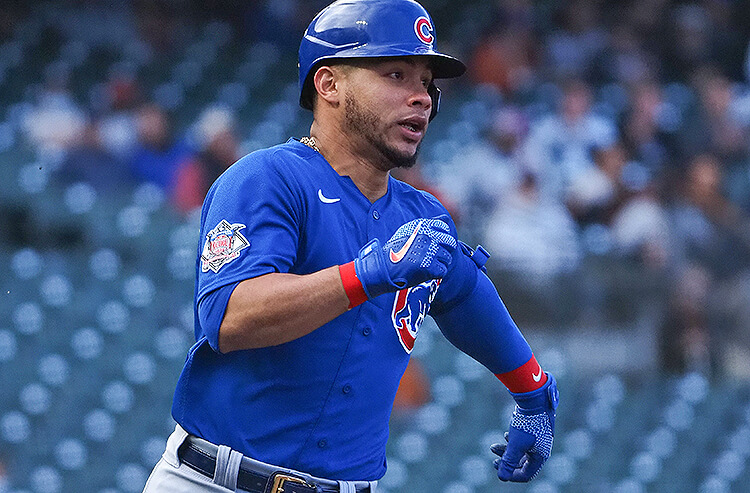