San Francisco is the first team in the MLB to reach 50 wins, and it will try to make it No. 51 today with a sweep of Oakland. Considering the A's are trotting out a struggling starter, we like the MLB betting value for the Giants to win yet again.

Sunday’s West Coast finale featuring the visiting Oakland A's and San Francisco Giants will pit a pair of southpaws against each other as the A’s will turn to Cole Irvin while the NL-leading Giants will counter with 25-year-old Sammy Long.

The Giants are riding a come-from-behind extra-inning win Saturday night which pushed their winning streak to five straight and 10 of their last 11. The 6-5 victory also made San Francisco baseball's first 50-win team.

The Giants opened as a -130 MLB betting favorite with that number quickly hitting -140. The total opened at 8 but hit 8.5 immediately after.

Here are our free picks and predictions for A's vs. Giants on Sunday, June 27, with first pitch set for 4:05 p.m. ET.

San Francisco opened -130 at TwinSpires Sportsbook and spent some time at -141 on the way to -148, where the moneyline stands at 1 p.m. ET. The Giants are taking 57 percent of tickets, but those translate to a 77 percent share of money. "We saw some respected play on the Giants at -130," TwinSpires trading analyst Zachary Lucas said. The total is up a full run to 8.5, with ticket count 3/1 and money 2/1 on the Over.

Cole Irvin (5-7, 3.98 ERA): Irvin has had a sub-4.00 ERA for the majority of the season but the lefty has been anything but automatic. Cole has given up four or more runs in five of his last seven starts and tends to allow more than a hit per inning although he doesn’t walk many. He also doesn’t strike many out — 60 K’s over 86 IP — and the A’s are 0-5 SU in his last five starts as an underdog.

Sam Long (1-0, 4.20 ERA): Long will be making his second MLB start after impressing in his first turn last Sunday. The young left-hander twirled six innings of two-run ball while giving up just four hits and striking out six Philadelphia batters. Long started the year in Double-A, where he posted a 3.00 ERA with a 1.07 WHIP to go along with 22 K’s in 15 innings before a brief two-game appearance in Triple-A. There, he surrendered just a single hit over seven-plus innings before getting the call. He is stretched out and could go 90-plus pitches Sunday.

A's: Mark Canha OF (Out), J.B. Wendelken RP (Out), Stephen Piscotty OF (Out).
Giants: Buster Posey C/1B (Questionable), Tommy La Stella 2B (Out), Brandon Belt 1B (Out), Evan Longoria 3B (Out).
Find our latest MLB injury reports.

The Athletics are 0-5 SU in Irvin's last 5 starts as an underdog. Find more MLB betting trends for A's vs. Giants.

No team has collected more wins this season than the San Francisco Giants, who earned their league-best 50th victory last night after a walk-off RBI double by catcher Curt Casali (who was filling in for the scratched Buster Posey). This Giants team keeps finding ways to win despite injuries and it seems every player who steps in is ready to contribute.

Case in point: Sunday’s starter Sammy Long. Long started the season in Double-A but now finds himself getting the ball for the rubber match versus the in-state rival Oakland A's. Long held a middle-of-the-pack Philadelphia offense to just two runs on four hits over six innings in his first MLB start and will look to ride that confidence into a meeting versus an Oakland team that sits just outside the Top 10 in BA and OPS versus left-handed pitching.

Long will also turn things over to a San Francisco bullpen that has been much better over the last month. They still sit in the bottom third in WAR on the season but over the last month, the Giants’ relievers have the league’s third-best ERA (2.60), are 7-2 with nine saves, and have the lowest walk rate in baseball.

The A’s saw 4 2-3 innings from the pen last night and managed just two hits in the loss. This was on the heels of Friday’s game, where the ageless Johnny Cueto spun seven scoreless innings before the bullpen closed it out with two scoreless frames of its own.

We’re still getting a great price for baseball’s most successful team at -140 in a pitching matchup that we think favors the home side. Cole Irvin lasted just 69 pitches in his last outing and gave up a four-run fifth inning before getting yanked. He gives up a ton of hits (52 over his last 38 1-3 innings) and can struggle early with 15 runs allowed in the first and second innings this year (30 total).

Give us the Gabe Kapler’s Giants at home for the sweep.

The Giants are getting things done with a next-man-up approach as injuries, especially to the infield, have been piling up. But this has not stopped them from scoring runs and cashing Over tickets: The Over is 6-2 in the Giants’ last eight as this offense is scoring 5.00 runs per game (second-most in the NL) and hits lefties well with a .756 OPS — also second-best in the National League.

San Fran also gets a lot of traffic on the bases as they draw a ton of walks and lead the league with an 11.6 percent walk rate versus southpaws.

Getting guys on base is one thing, but cashing them is another. That’s no problem for the Giants either as they lead all of baseball with 114 long balls. With Irvin struggling to keep runners off the bases, one simple mistake could turn into a big inning for the Giants.

The A’s are led offensively by Matt Olson, who is just 1 for 9 in the series but is still hitting .350 over the last 30 days with seven bombs and 23 RBI. He hits LHP especially well as he owns a 1.004 OPS and a .635 SLG percentage versus southpaws this year. If the A’s are going to get some runs across the plate, Olson needs to get going and he has a great matchup to do so.

There should be a strong wind (11.1 mph) blowing straight out to center field, which should also help us hit the nine-run mark. 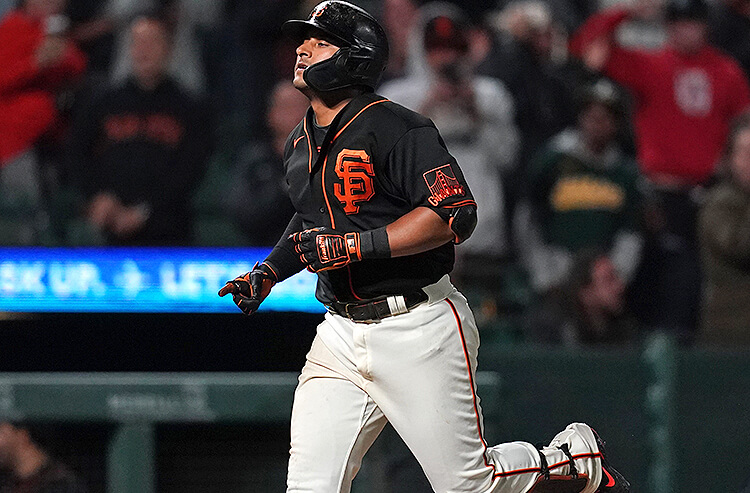 A's vs Giants Picks and Predictions: Cole Irvin Unlikely to Slow Down MLB-Best Giants
Provided by