The Twins enter the series opener on the road against the White Sox with wins in seven of their last nine games. Are they a good play at plus money against a Chicago team that is 2-7 in its last nine? Find out with our Twins vs. White Sox picks.

The Minnesota Twins are hot, winning seven of their last nine games heading into Monday's series opener against the Chicago White Sox.

Chicago, meanwhile, has stumbled recently, dropping seven of its last nine but the club will send Lucas Giolito to the mound in what has all the makings of a pitchers' duel, as the underdog Twins counter with Kenta Maeda.

Who will take the first contest of this four-game set? Find out with our free MLB betting picks and predictions for Twins vs. White Sox on June 28.

The line opened at Chicago -145, with the total at 10.5. Early action has been fairly split and has favored the Under, with the total being bet down to 8.5. Check back later for a full report from Patrick!

Kenta Maeda (3-2, 4.85 ERA): Maeda had a miserable first month and then pitched better in May before getting hurt and missing a few weeks. He's made two starts since returning from the IL and has been solid, allowing three runs over 9 1-3 innings while striking out 11. He'll enter this start with a week off, having pitched 5 1-3 innings of two-run ball in his last outing on June 20.

Lucas Giolito (5-5, 3.80 ERA): The right-hander has also had a mixed bag of a season but has certainly turned a corner after getting roughed up in April. Giolito has allowed three runs or fewer in six of seven starts, striking out at least seven in all but one of them. He's gone at least six innings in eight straight starts and has lowered his ERA from 4.99 on May 2 to 3.80.

The Under is 5-2 in the last seven meetings in Chicago. Find more MLB betting trends for Twins vs. White Sox.

Look out, the Twins have turned their season around... maybe?

Minnesota has, without question, been one of MLB's most disappointing teams this season. They're 10 games under .500, sitting in the American League Central basement with the Kansas City Royals, and have surrendered more runs than all but two teams in the AL. After two straight playoff appearances, this was supposed to be a club that once again competed for a third consecutive division title.

While that appears to be a lost cause at this point, as the White Sox are clearly one of MLB's elite teams and sits 11 games up on the Twins, Minnesota has reeled off wins in seven of its last nine games and sports one of the best offenses in the game. Will that be enough to go on a run? Maybe not, unless its AL-worst pitching staff, as ranked by FanGraphs' WAR, can flip the switch immediately. The Twins rank 26th in ERA over the last 15 days, 30 days, and on the season. They've consistently been bad.

But as far as the series opener goes, the Twins are worth a look at plus money.

Maeda has been throwing better following a disastrous first month, the Twins are finally hot, and they run into a Chicago team that is slumping. The White Sox, battered by injuries, have won two of their last nine games and while they will send Giolito to the hill, he's struggled to keep the ball in the yard this season and gets a Twins offense that has hit more homers than all but two teams.

While reading too much into batter vs. hitter splits can prove to be pointless, especially in smaller samples, ageless slugger Nelson Cruz (17 bombs, .935 OPS) and Max Kepler have both destroyed Giolito, with each having a career OPS north of 1.000 against him and combining for seven bombs. The ball flies out of Guaranteed Rate Field and the home run-hitting Twinkies are going to take advantage of that.

Is Chicago the better team with a better pitcher on the mound? Yes, of course. But if favorites won every game, we'd all be rich. There's good value in the underdog Twins at +128.

Both starters were top Cy Young contenders last season but certainly didn't pitch like it early on. Giolito had a 5.68 ERA after the first month of the season while Maeda was even worse, with a mark of 6.17.

Each of them has improved since, though. Giolito has a 3.03 ERA in 10 starts since the calendar flipped to May and has held opponents to a .199 batting average over that stretch. His numbers are starting to look very similar to his last two seasons when he was one of the best pitchers in baseball.

Maeda, meanwhile, spent a bit of time on the injured list but has a 3.77 ERA in six starts since April, limiting opposing bats to a .698 OPS. He's still far off from his dominant 2020 season, as he takes a 1.44 WHIP into Monday's series opener, but he has managed to bring his ERA under 5.00 for the first time since April 14.

He's made two starts since coming off the IL and was solid in both. After getting up to 84 pitches in his last outing, he should be worked up enough to ideally give the Twins six innings for the second time this season if he's on.

Although Giolito's home run issues could bite him in this one and is what we're banking on to be the difference, he's still been very effective despite a career-high home run/fly ball rate. Giolito, who has allowed homers in five straight games, has served up a bomb in seven of his last eight starts but has surrendered three runs or fewer in six of them.

While Minnesota's bullpen has gotten hammered this season, Chicago's 'pen has been one of baseball's best. And we're counting on both starters to do enough to contain these Top-10 offenses, as measured by OPS, and keep this one under the 8.5 total. 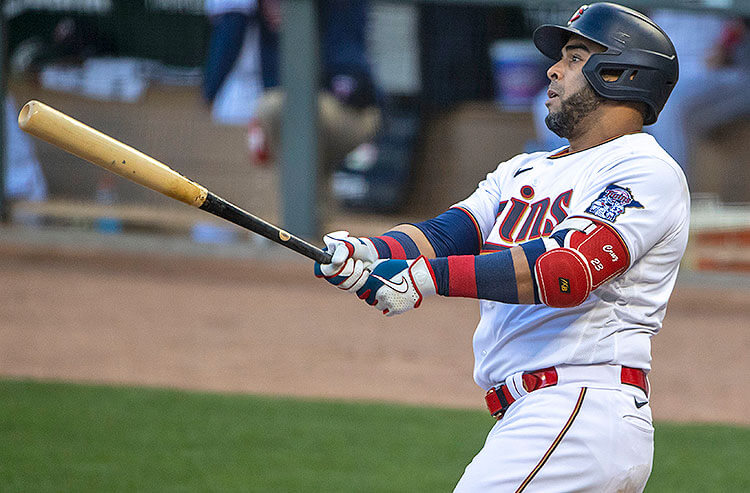