Angels vs Yankees Picks and Predictions: NYY Offense Wakes Up Against Bundy

Both the Yankees and Angels are reeling, with New York fresh off getting swept by Boston while Los Angeles snapped a five-game skid Sunday. Can the home favorites get back in the win column for the series opener? Find out with our Angels vs. Yankees picks.

Two reeling teams collide Monday in the Bronx when the New York Yankees host the Los Angeles Angels for the first contest of a four-game set.

New York is fresh off getting swept by the Boston Red Sox while Los Angeles snapped a five-game losing skid with a win over the Tampa Bay Rays on Sunday.

Check out who we like for the series opener with our free MLB betting picks and predictions for Angels vs. Yankees on June 28.

Dylan Bundy (1-7, 6.68 ERA): Bundy is having a horrific season. A year after posting a 3.29 ERA and 1.04 WHIP, his earned run average is up more than three runs while he's sporting a 1.39 WHIP. He's been done in by the long ball and has struggled to work deep into games, with May 2 being the last time he completed six innings. That's also the last time his ERA was under 5.00.

Michael King (0-3, 4.05 ERA): The 26-year-old will make his sixth start of the season after pitching in relief to begin his 2021 year. While he started out by throwing well out of the bullpen, King has a 5.86 ERA over his last eight appearances, with opposing hitters batting .282/.375/.464 against him over that stretch. After logging a 5 1-3 innings (his most as a starter) on June 4, King has gone fewer than five innings in three consecutive starts.

The Over is 6-0-1 in the Yankees' last seven games against teams with a losing record. Find more MLB betting trends for Angels vs. Yankees.

The Yankees dropped to fourth in the loaded AL East after getting hammered by the Red Sox on Sunday. Not even their ace could help them avoid a sweep, as Gerrit Cole was pummeled, allowing season highs of eight hits and six runs in the blowout loss.

Perhaps more problematic than that, considering Cole will surely bounce back, was New York's offense. The Yanks mustered seven runs over the three-game series, which was fewer than Boston totaled in Sunday's lopsided finale. Injuries haven't helped, but the Yankees' offense has been inconsistent all season. Among AL teams, the Yanks have only scored more runs than the Baltimore Orioles and Detroit Tigers, who are both double-digit games under .500.

But there's hope for a turnaround — at least on Monday. That's because New York will face a pitcher who will seemingly let any team hit its way out of a slump.

Bundy has reverted back to his problematic Baltimore days, if not worse, after putting together the best season of his career last year.

While Bundy's curveball has remained an effective pitch for him, his fastballs are getting tattooed, with hitters slugging .568 off his four-seamer and .735 off his sinker. Considering he's throwing the hard stuff nearly 50 percent of the time, he can't be trusted against any team, even a Jekyll and Hyde Yankees lineup.

Bundy has failed to go more than five innings in five of his last seven starts, consistently taxing and putting pressure on an Angels bullpen that has the second-highest ERA in the AL. Forget about the Yankees' problems for one day and back them to take the series opener.

The Yanks have gotten no production from their outfield, outside of Aaron Judge. Giancarlo Stanton has missed time and has proven that he's more of a strong complementary power bat than superstar. Luke Voit, the MLB home run leader last year, has missed nearly the entire season, while D.J. LeMahieu, the MLB batting leader in 2020, is hitting for no power, and neither is shortstop Gleyber Torres.

Here's the thing, though: All of those guys have pop and get a pitcher in Bundy who ranks Top 10 in homers allowed per nine innings and home run/fly ball rate among pitchers who have thrown at least 60 innings. The only reason Bundy isn't qualified is because he has struggled to get through even four innings since the first month of the season. Angels relievers, collectively, also have Bottom-10 marks in those categories.

New York might not be cashing a lot of runs but it can swat the ball out of the park (fifth in the AL in homers) and you won't find many better matchups to go yard in. The Yankees will hit the ball hard to kick off this seven-game homestand.

While the Angels' pitching has held them back, they can mash. They rank Top 10 in MLB in homers, average, slugging, and OPS, led by AL MVP contender Shohei Ohtani.

Though New York has a strong bullpen, which is certainly a clear advantage in this series, Los Angeles should be able to get to King and force the Yankees to use a lot of arms. King doesn't miss a lot of bats, he struggles with control, and he has completed fewer than five innings in four of his five starts.

Both teams will do damage at the plate in this one. If you still aren't convinced, there's this: The Angels are 16-4 O/U in their last 20 and have cashed Overs at the second-highest rate in the majors. 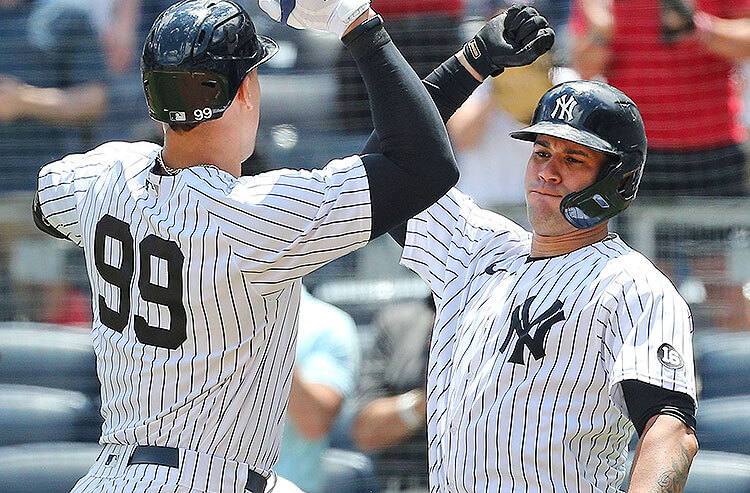 Angels vs Yankees Picks and Predictions: NYY Offense Wakes Up Against Bundy
Provided by