After coming just three outs away from winning as +155 underdogs yesterday, we're running it back with the Phillies against the World Series defending champion Atlanta Braves. Find out why in our MLB betting picks and predictions below.

Bryce Harper’s go-ahead home run in the top of the ninth inning last night wasn’t enough for the Phillies to take the second game of the series as Atlanta’s William Contreras walked it off in the bottom half of the inning.

Heading into the rubber match today, Charlie Morton and the Braves are sizeable -165 favorites versus Ranger Suarez and the Phillies. Both clubs sit with identical 20-23 records through two disappointing months of baseball and are looking to make up ground on the Mets.

Can the Phillies trust their defense and bullpen now that the bats are waking up or has Morton gotten over some early-season issues for the Braves and is ready to deal? Find out in our free MLB picks and predictions for Phillies and Braves.

Atlanta is gaining some confidence in the moneyline market as the Braves have moved 35 points to -175 after opening at -140. The home side closed as -182 favorites in yesterday's walk-off win and as +110 dogs in the series opener which the Braves lost.

Tonight's total has moved from 8.5 to 9 after moving from 8 to 8.5 in yesterday's game. Light rain is expected at Truist Park so the weather is a serious factor in today's total.

Ranger Suarez (4-2, 4.12 ERA): The lefty is coming off an abbreviated start versus the Dodgers where he needed 84 pitches to get nine outs. To his credit, it was the Dodgers and the second-straight start he had to face them so we aren’t reading too much into his last turn. The Venezuelan pitcher has not allowed more than three runs in any of his eight starts this season and the Phillies are 6-2 SU in those starts.

Charlie Morton (3-3, 4.95 ERA): It was a rough start to the season for the 38-year-old pitcher but he does own a 2.90 ERA over his last three starts. He’s been flirting with 90 pitches per start and has recorded 18 outs just once over his eight turns. He owns a respectable 25% CSW rate on the season. Morton is 5-5 in his career versus the Phillies with a 4.79 ERA while the Braves are 4-4 SU in the right-handers’ starts this season.

The Over is 7-0-1 in the Braves’ last eight games as home favorites. Find more MLB betting trends for Phillies vs. Braves

Phillies vs Braves picks and predictions

We were three outs away from cashing a Phillies moneyline ticket at +155 yesterday, but the bullpen and errors sunk Philadelphia again as the visitors couldn’t hold a 5-4 ninth-inning lead. Now they enter the series' third game of this four-game set as +145 underdogs and it’s hard not to look at the dog again at that price.

If the visitors are going to do it today, they’re going to need the bats to get going and so far in this series, the Phillies are hitting .278, have scored 12 runs and are getting on base at nearly a .400 clip.

Bryce Harper is picking up where he left off after missing five games as he collected seven total bases last night. Everyone in the lineup last night either had a hit or a run and when this lineup is going, it is a tough one to navigate — especially if Nick Castellano heats up.

Charlie Morton has struggled with some command this season and if the Phillies can get into the Atlanta bullpen, they could certainly take a multi-run lead into the late innings. In the series, the Phillies have forced the Braves to throw 10 innings from their relievers and have collected 11 hits and five runs over the two games. Even if Morton goes six innings, the visitors will have enough time to get on the scoreboard.

Atlanta is hitting a robust .357 in this series but has struggled to hit for extra bases as their .081 ISO and .443 SLG indicate. Of their 15 hits in the series, just four have gone for extra bases — three doubles and a home run.

Ranger Suarez will be a tough matchup for the Braves as he's among the best in hard-hit rate and average exit velocity allowed. Atlanta also strikes out at an alarming 27.7% versus left-handed pitching and Suarez has 18 punchouts over his last 16 innings.

Riding the Phillie bullpen and their defense is a wild trip, but this offense has shown that it can stack runs at Truist Park. Harper is locked in, the Atlanta bullpen is tired and doesn’t get a rest tomorrow and three starters in the Philly lineup have all had success against Morton (Alec Bohm 3-for-9, JT Realmuto 4-for-13, and Jean Segura 12-for-35).

Yesterday, we saw the total open at 8 and close at 8.5 as the weather conditions improved during the day. Today’s total opened at 8.5 and has since hit 9 across the board. Yesterday’s weather conditions are very similar to today’s as some rain is expected but humidity is also really high which helps with ball carry.

As of right now (1 p.m. ET), the rain looks minimal and the winds are blowing out. If this game is delayed and forces either starter to leave early, this would favor the Over as both bullpens sit in the middle of the pack in ERA. The better of the two bullpens — Atlanta’s — has pitched 10 innings over the last two days and has been touched by the warming bats of the visitors.

Atlanta is the second-best Over team in baseball with a 60% hit rate while the Phillies aren’t far behind at 53.7%. Only 10 teams have been profitable to the Over this season and tonight’s matchup features two of them. At home, no team has hit more Overs this season than the Braves who are 15-6-2 (71.4%) while the Phillies have the best Over rate on the road at 68.4%.

Did we mention that Bryce Harper is looking healthy again and is locked in?

Atlanta is hitting .357 in the series and the Philly bullpen and defensive issues are serious problems when looking at the Under. Hitting conditions could be great with the humidity if the rain is minimal as well.

The visitors have also had no issues hitting against Morton and could get to the veteran pitcher whose chase rate, whiff percentage, and expected metrics are way down this season.

The runs could come late again today, but we’re expecting both sides to get on the scoreboard and two-way scoring has us reaching for the Over 9 despite the total opening at 8.5.

Yesterday, we hit Bryce Harper Over 1.5 total bases for +145 and he finished the game with seven total bases, but now his market has plunged to +115 which has pushed us off the number. However, we are going back to the Philly lineup and hitting the No. 2 hitter for a run.

Alec Bohm has hit Morton well on limited at-bats with a 3-for-9 mark. He's also reached based base five times in the series and has scored five total runs. He is hitting for extra bases (a double yesterday) and is riding a four-game hitting streak. He also has Harper hitting behind who knocked in four runs just last night.

Bohm will see pitches with the protection behind him and has the power to get himself into scoring position for the meat of the Philly order. He's among the best in baseball for exit velocity, hard-hit rate, xSLG, and xwOBA which is great by itself but then you add in the reigning NL MVP swinging behind him and his probability of scoring is much better than his 44% implied probability at +128 for a run. 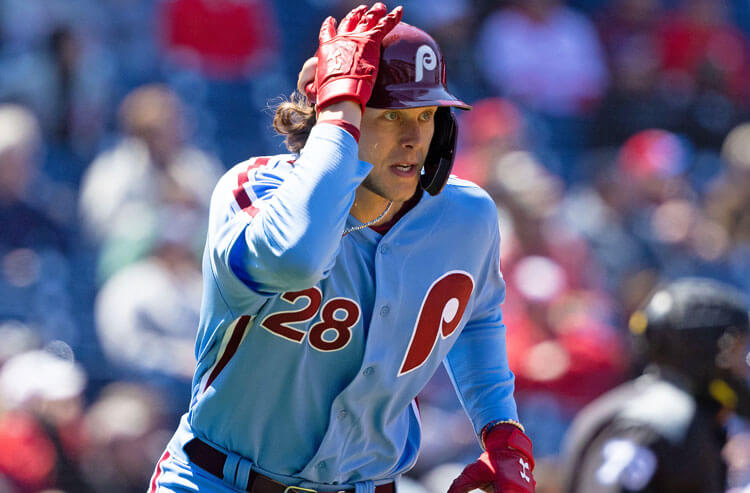 Phillies vs Braves Picks and Predictions: Still Value With Underdog Phillies
Provided by