The Angels have won 12 of 15 inside Angel Stadium and get a chance to complete a two-game sweep of the Rangers with Reid Detmers on the mound. With advantages across the field, our MLB betting picks are backing Ohtani's bat and another Angels victory.

The Los Angeles Angels have won three games in a row and will now be looking to secure this mini two-game sweep of the Texas Rangers on Wednesday.

It genuinely feels like the Angels have finally put the right amount of talent around Mike Trout, and it's shown to the tune of a 27-17 record. However, Texas has some talent of its own and will be looking to end a three-game skid.

Can the Rangers roll into Anaheim and earn a series-splitting win on Wednesday? Keep reading our MLB betting picks and predictions to find out.

The Angels are pretty heavily favored in this meeting with the Rangers, as they opened as -150 favorites and are now up to -175 on some sportsbooks. The best price you can find on them is -169 at the moment.

As for the total, you’re not going to be able to find the number at anything other than 8.5. That’s where the total opened and it hasn’t moved since.

Glenn Otto (1-2, 5.55 ERA): Otto’s MLB career is off to a rather rough start, as he was 0-3 with a 9.26 ERA in six starts last season and is now 1-2 with a 5.55 ERA in five starts in 2022. The righty has proven to be extremely hittable in his time in the big leagues, but he did throw six innings of two-run ball in a loss to the Houston Astros last time out. The Rangers will be hoping for more of those flashes moving forward.

Reid Detmers (2-1, 4.15 ERA): After throwing a no-hitter against the Tampa Bay Rays on May 10, Detmers came out and gave up three earned runs in only 3 2-3 innings of work against this same Rangers team in his last start. The lefty clearly possesses a ton of ability, but he has not yet figured out how to consistently bring it. Luckily for him, this is a home start. Detmers has an 8.49 ERA in three starts on the road in 2022.

The Angels are 12-3 in their last 15 home games. Find more MLB betting trends for Rangers vs. Angels

Rangers vs Angels picks and predictions

The Angels have had a true home-field advantage in recent weeks, winning 12 of their last 15 contests at Angel Stadium. Los Angeles is also 23-8 in its last 31 home games against teams with losing records and 16-7 in its last 23 games as favorites.

This is just a much better baseball team than it's been in recent years, with Trout and Shohei Ohtani having a competent supporting cast and an improved starting rotation. Look for Los Angeles to keep it rolling with a victory tonight, as the team has a huge edge on the mound and the better overall lineup.

Otto is going to be the one starting this game for the Rangers, and he gave up eight earned runs over four innings against the Boston Red Sox before turning in his solid outing against the Astros in his last start.

The righty just hasn’t quite found his footing in the big leagues yet, and while he's mixed in a few decent starts this season, it's hard to imagine him shutting down the Angels lineup after the way he pitched in 2021.

Los Angeles actually scored five earned in two innings against him in his final start of the year against the Angels in 2021, and the Angels are also 10-2 in their last 12 home games against right-handed starters.

Also, while Detmers’ no-hitter kind of came out of nowhere this year, the lefty is still a solid starting option for Los Angeles. He did give up three earned runs in only 3 2-3 innings against the Rangers in Texas last week, and he also gave up five runs in 3 1-3 innings against them on the road back on April 15.

However, Detmers’ best work has come at home this season, as he is 2-1 with a 1.96 ERA in four starts at Angel Stadium. His stuff is far from overpowering, but he should pitch effectively to contact against a Rangers lineup that can struggle at times. Don't be surprised if he turns in a quality start.

Detmers may be emerging as a good piece in this Angels rotation but he’s not going to go out and shut down an offense that's had his number this year.

We expect the lefty to figure the lineup out a bit, but he will likely still give up three or so runs in this game — he gave up eight over seven total innings against the Rangers in two road games this year. With that, the Angels will just need to do some damage against Otto in order for this Over to hit, and it’s hard to imagine them not doing that.

These teams also have mediocre-at-best bullpens so there will be opportunities for these hitters to produce late in the game. The Over is 7-1-2 in the last 10 meetings between these two teams and 3-1-1 in the Angels' last five games against right-handed starters.

Ohtani is coming off a game in which he went 0-for-2 but he should be able to bounce back with a big performance at the plate.

Otto has just been largely miserable on the mound over the last two years, so it’s hard to trust him to get anybody out. That's especially true against some of the best hitters the Angels have to offer, making Ohtani a great bet. Either he’ll drive one of his teammates in with an extra-base hit, or he’ll go yard and do it himself. 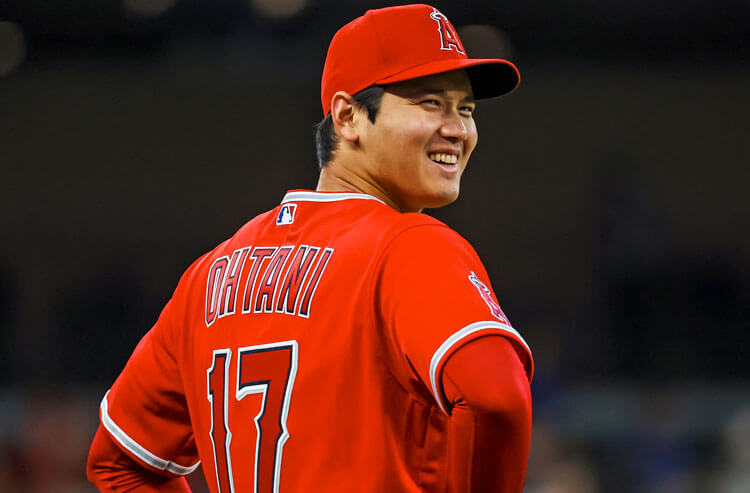