In a game of the season contender Tuesday, New York mounted a furious comeback attempt but came up short in a 13-12 win for San Francisco. In the series finale, our MLB betting picks like the Mets to get a little revenge over the Giants.

After playing what was possibly the game of the year so far last night, the San Francisco Giants and New York Mets will lock horns for a third and deciding game of this series.

The two played in an absolute thriller last night, with the Mets mounting a furious late-game comeback sparked by a seven-run eighth inning. Despite that, they couldn't do enough to get the win as they lost 13-12.

Who will grab the final game to win the series in Oracle Park? Find out in our MLB picks and predictions for Mets vs. Giants Wednesday, May 25th.

The Giants opened up as muted favorites at -123. Since then, we haven't seen much movement. The odds currently at FanDuel are the consensus. The Giants are -125 on the moneyline, and the Mets return at +108. The total opened up at 8.5 and has remained there.

Bettors are staying away from this game from both sides of the market – moneyline and totals – perhaps due to the emotional nature of last night's Giants victory.

Thomas Szapucki (0-0, 0.00 ERA): Szapucki returns to the majors today after an impressive two months for Triple-A Syracuse. He's being called up after a host of injuries in the Mets bullpen, as well as the regular pitching rotation has forced them to shift things around. He posted a 2.86 ERA in seven starts in the Minors and had an eye-catching K rate. However, he's yet to see over five innings of work in minors, and it's unclear whether that's by design or because his past injuries are still limiting him.

Jakob Junis (1-1, 2.70 ERA): The righty hurler has given up runs in precisely 50% of his innings pitched (8 earned runs in 16 innings of work). His 2.70 ERA has been a pretty decent start for him. If the season ended today, it would be the best ERA of his career. Because of that, it feels like he's living on borrowed time. His expected ERA is two runs higher than his actual one. He gets into trouble with hard-hit balls when he isn't getting batters to chase.

The Mets are 4-0 in their last four after allowing five runs or more in their previous game. Find more MLB betting trends for Mets vs. Giants

Mets vs Giants picks and predictions

These are one of my favorite games to handicap because of the unknown nature of one of the starting pitchers. Most books aren't releasing batting props for the Giants because this pitching matchup has so many unknowns. You have to do your homework to unearth an edge, which I've done.

I'll be rolling with the Mets today at plus money. The Mets are 17-4 in their last 21 games following a loss and 4-0 in their previous four games when allowing five or more runs in the previous game. I won't try to buck those trends.

It's challenging to account for the emotional toll that a game last night has on a team, particularly when the next game comes early in the afternoon. You can make your case for it benefiting either team. I simply choose to ignore it, because it seems like an impossible task.

I know the Giants struggle against southpaws like the one they'll see today. All the splits go down against lefties vs. righties. They go down even a little more when they are at home. The Mets also have another thing in their favor today. While Szapucki doesn't have overwhelming velocity, he does rely a ton on his fastball. Because of that, I would define him as a "power pitcher." The Giants also struggle more against those than finesse or balanced pitchers.

These may seem like small things, and they are in the grand scheme of things, but when you're looking at a matchup that features a pretty lackluster pitching matchup, you take the edges you can get. Also, it's a bit anecdotal but in general, teams take a little bit longer to pick up on a lefty. It takes even longer when they've never seen that pitcher before. Szapucki isn't going to go deep into this game. The Giants may never have a chance to "pick up" on him before he's gone and backed by a strong bullpen.

I have the Mets projected as favorites with a 54% win probability. That would suggest the moneyline should be priced closer to -117. I see tremendous value in the current offers. The best number I could find was at Circa Sports. I'll be grabbing that.

Prediction: Mets moneyline (+120 at Circa)

I'm willing to roll the dice a bit more on Szapucki and the juice to the Under tells me at least oddsmakers agree with where my thought process is here. Sometimes I can be good, sometimes that can be not good. But again, I'll take my chances.

Putting aside the unique advantage I believe the Mets have behind the mound today, let's remember that the Giants haven't scored many runs lately. They had been unable to get over this posted total for three consecutive games and four out of the last six before that. The pitching matchup, coupled with the other hot/cold nature of their bats, gives us a good advantage. You've probably done quite well if you've played the zig-zag theory when it comes to their scoring. They rarely have multiple games in a row where they put up lots of runs.

Since we haven't mentioned it yet, it's worth noting today's weather for this early start in Oracle. It will be a cooler day, and the winds will be pretty brisk out to right field. Traditionally, at Oracle, that's actually led to a reduction of home runs rather than an increase of them. For a fly-ball hitting team like the Giants, that can only help us with this Under here.

I am projecting the Giants to stay Under this total about 65% of the time. Couple that here with some situational handicapping, and it's one of my favorite plays of the day.

One of the most consistent things about the New York Mets this season has been their resilience. They've bounced back after losses more often than not. They've won over 80% of their last 21 games following a loss. I expect them to continue following that trend and get off to a quick start today, backing them to get two runs first, a number that's better than "to score first."

The other side of this handicap is the aforementioned Giants' struggles against lefties and the lack of familiarity they have with Junis. Even if they eventually get to him, it won't be early. This is perhaps one of the last opportunities to make it in the bigs, and I expect him to deliver. This is my favorite bet of the day. There are just countless things favoring the Mets in this spot. 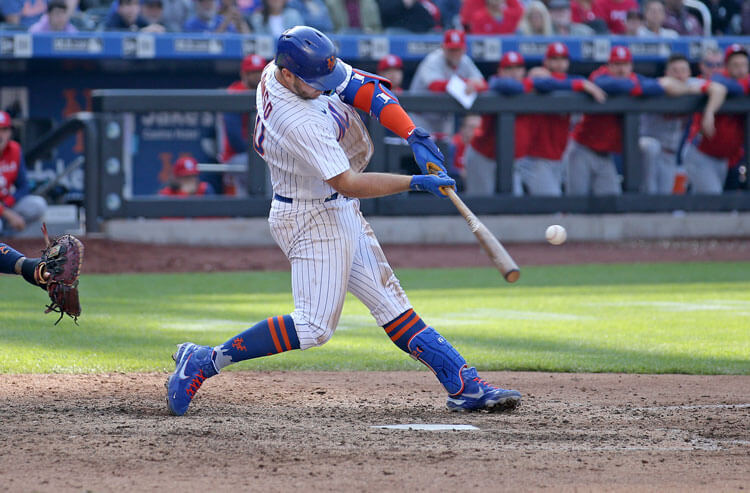