Blue Jays vs Yankees Picks and Predictions: Hot 'Dogs Have Value Against Cole

Toronto has won five straight to move 3.5 games back of New York in the AL wild-card race. Extending the win streak to six against Gerrit Cole will be tough, but Toronto still offers value as a road dog. Read more in our Blue Jays vs. Yankees picks.

The Toronto Blue Jays struck first in their pivotal four-game set with the New York Yankees and will look to extend their winning streak to six games when the two teams collide again on Tuesday night in the Bronx.

Toronto pumped New York 8-0 in Monday's series opener to move 3.5 games back of the Bombers in the wild-card race. New York, which has dropped three straight, will look to get back on track as big betting favorites behind ace Gerrit Cole, who is coming off a season-high 15-strikeout performance.

See who we like in our free MLB picks and predictions for Blue Jays vs. Yankees on September 7.

Steven Matz (10-7, 3.80 ERA): The lefty has been giving Toronto solid innings, allowing two runs or fewer in five of his last six starts, and he brought his ERA under 4.00 in late August for the first time since April. He is coming off a five-inning, two-run performance against the Orioles in which he struck out five but walked a season-high-tying four batters. Matz faced the Yanks in May and struck out a season-high 10 over 6 2-3 innings.

Gerrit Cole (14-6, 2.73 ERA): Cole has been dominant since coming off the COVID-IL, allowing two total runs over four starts and powering the Yanks to wins in each of those outings. He has struck out 39 while walking four over that stretch and brought his ERA down to its lowest point since mid-July. The hard-throwing righty has faced the Jays three times this season and has a 2.33 ERA against them while holding the club to a .171 batting average over 19 1-3 innings.

The Under is 9-4 in the last 13 meetings. Find more MLB betting trends for Blue Jays vs. Yankees.

Toronto has won five in a row and eight of its last nine games while the Yankees have dropped seven of nine since winning 13 straight to suddenly make this series a crucial one for both clubs as they look to nab an AL wild-card spot.

New York was sitting pretty just last week as it took control of the AL wild-card race by beating every team in its path, but now holds just a 0.5 lead over the Boston Red Sox, with three more teams — including the surging Blue Jays — all within striking distance. The good news for the Bronx Bombers is that they will have Cole, the Cy Young betting odds favorite, on the hill for Tuesday night's clash.

Cole has been outrageous lately, putting to bed any questions about how much he needed the sticky stuff to perform at an elite level. He's leading the AL in a number of significant pitching categories and is on his hottest run since April.

New York has a huge advantage for this matchup, as it would in nearly any game that Cole pitches, but it's impossible to ignore a red-hot Jays team that has put up back-to-back shutouts while scoring 42 runs over its five-game winning streak. Cole can dominant anyone, but this offense isn't the same as the Angels team he got in two of his last four outings.

As tempting as it is to take Toronto as a +170 underdog, we are betting that Cole will pitch the Yanks to a win. But the Jays' offense is clicking and the pitching has been strong enough that we believe this one will be close, so we're good finding some value in Toronto +1.5 to avoid grabbing the Yanks at -185 odds on the ML or banking on them to take the Blue Jays down by multiple runs.

If Toronto's offense is going to slow down against anyone, it's Cole.

Not only is he at his best right now, but he has held Toronto to five runs over three outings this season. The last time he faced the Jays, in June, he held them to two runs over eight innings.

The Yanks will ride their ace in this spot and as long as Cole is going, runs are going to be at a premium. Even if Toronto's home run-heavy offense (the Jays are first in MLB in homers) runs into one, this isn't the type of matchup where the Blue Jays are going to be putting on runners consistently. Cole leads the AL in WHIP and has a career-low walk rate.

Matz, meanwhile, has been on a good little run (the Under has cashed in each of his last three starts) and gets a Yankees team that has sputtered against lefties of late, ranking 18th in slugging and 20th in average over the last 30 days. He's not likely to eat the same innings that Cole will, but Matz will have a bullpen that's 10th in ERA over the last month and sixth over the last two weeks backing him up.

That bullpen is now bolstered by top pitching prospect Nate Pearson, who struck out the side in his last outing, which was his second appearance since returning to the big leagues. Jays relievers are second in the majors in strikeouts and third in K/9 rate (the Yanks are first) over that two-week stretch. Expect a lot of swing and miss in this contest, which will help keep runs off the board.

The story of this game will be pitching. 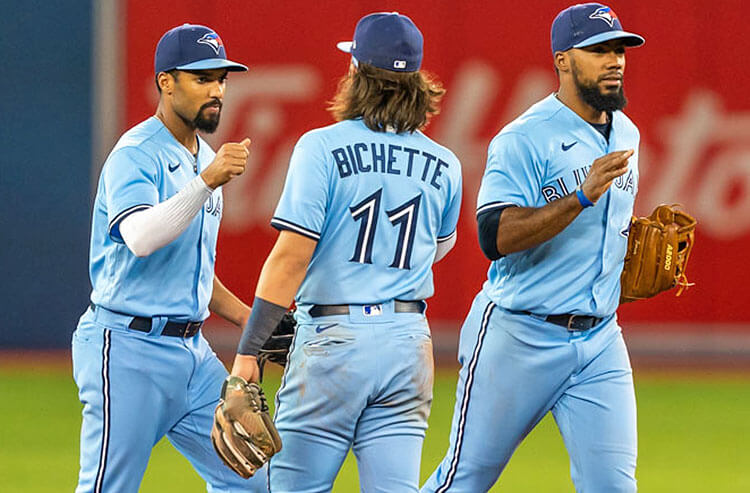 Blue Jays vs Yankees Picks and Predictions: Hot 'Dogs Have Value Against Cole
Provided by