The Brewers are 0-5 against the Phillies in 2021, including a 12-0 loss last night. But Milwaukee is sending red-hot starter Eric Lauer to the mound tonight, giving the home Brew Crew good value as a pick'em against September struggler Aaron Nola.

The Philadelphia Phillies and Milwaukee Brewers face off for the second contest in a three-game set at American Family Field on Tuesday night.

After a 12-0 Philadelphia victory against Milwaukee yesterday, the Phillies are one of the few clubs in the majors that can say they've had the Brewers' number this season.

Oddsmakers are expecting a closer game this time around, with MLB betting lines currently having this contest set at a pick'em.

Here are our best free Phillies vs. Brewers picks and predictions for Tuesday, September 7, with the first pitch scheduled for 7:40 p.m. ET

Aaron Nola (7-7, 4.54 ERA): Nola has been up-and-down this season, pitching to an impressive 1.13 WHIP with a .234 opponent batting average but surrendering at least four earned runs in six of his last 11 starts. In his last outing, he allowed two dingers and six runs in four innings against the Nationals.

Eric Lauer (4-5, 3.43 ERA): Lauer has a 1.22 WHIP with an opponent batting average of .228 through 89 1-3 innings this season. The 26-year-old is coming off an impressive performance against the Giants, where he allowed just three hits and one run across seven innings.

The Brewers are 36-15 in their last 51 games vs. a right-handed starter. Find more MLB betting trends for Phillies vs. Brewers.

The Philadelphia Phillies are just 1.5 games behind the first-place Braves in the AL East and they sit two games behind the Padres for the final Wild Card spot. They've gone 8-2 in their last 10 games and after yesterday's rout, they are a perfect 5-0 against Milwaukee this season. That's very impressive when you consider just how good the Brewers have been this year as they sit comfortably atop the NL Central with an 84-55 mark.

A big reason for Milwaukee's success this year has been the outstanding play of its rotation and although Corbin Burnes, Freddy Peralta, and Brandon Woodruff have gotten most of the attention, today's starter Eric Lauer has been very effective as well. In his last 10 games, Lauer has pitched to a sizzling 2.10 ERA with a 1.07 WHIP.

The Phillies will respond with right-hander Aaron Nola. The veteran has an expected ERA of 3.61 and one of the best strikeout-to-walk ratios in the majors (5.3 K/BB), but he has majors problems closing out innings when he gets in trouble.

Nola has an ERA of 7.49 with two outs and allows opposing batters to post an OPS of .868 against him with runners in scoring position. Those metrics have resulted in some very mixed results for the right-hander, who has a 5.20 ERA in his last 20 starts — with the Phillies losing 12 of those contests.

The Brewers also have the superior bullpen, with their relievers collectively pitching to a 3.93 ERA and a .226 OBA, while the Phillies bullpen has a 4.44 ERA with a .247 OBA.

The Phillies have been much hotter at the plate over the last two weeks than the Brewers but those things ebb and flow during the course of the season. While the Brewers have lost every game against the Phillies this year, they are still an outstanding 44-21 in their last 65 games and have both home-field advantage and the pitching edge in this one. Back the Brewers at a pick'em price.

We mentioned Nola's recent struggles but he has a long-term problem when it comes to pitching in September. Perhaps it's psychological, or he just wears down over the course of the season, or maybe he just gets stressed out at the beginning of the school year (who can blame him?) but for whatever reason, Nola has an ERA of 5.37 in a total of 12 September starts since 2019.

Now, Nola faces off against a Brewers team that is sixth in the majors with an OPS of .777 over the last 30 days and is plating 5.12 runs per game since the All-Star break.

The Phillies recently lost slugger Rhys Hoskins to a season-ending injury but they have been mashing without him, posting an OPS of .826 and plating 6.15 runs/game over the last 15 days.

The Phillies have gone 9-3 O/U in their last 12 games while the Over has cashed in four of the last five meetings between these squads in Milwaukee. With strong winds blowing out towards centerfield and reaching up to 14 miles per hour today, back the Over. 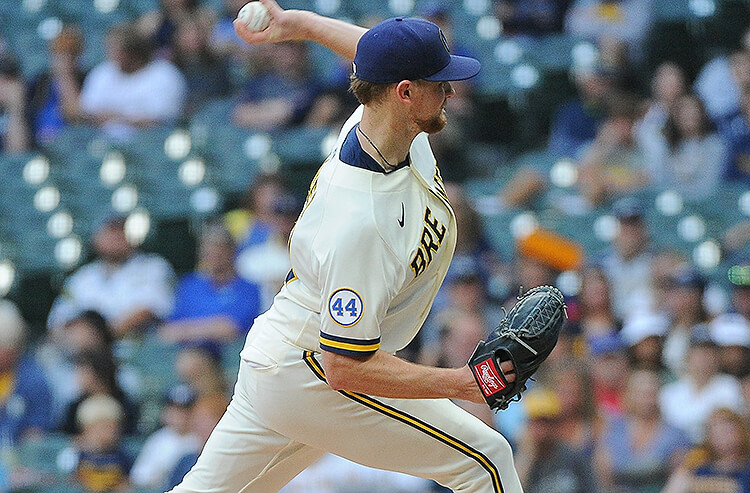