Houston crushed Seattle 11-2 in the series opener to move 5.5 games up on the M's in the AL West standings. Seattle will be in tough again Tuesday with struggling rookie Logan Gilbert on the bump. Find out more in our Mariners vs. Astros picks.

The Seattle Mariners try to gain ground in both the division and wild card battles on Tuesday night as they tangle with the Houston Astros in the second contest of a three-game set at Minute Maid Park.

The Astros hammered the M's by a score of 11-2 last night to extend their lead in the AL West to 5.5 games. Oddsmakers expect them to prevail again with MLB betting odds installing the 'Stros as -162 home favorites with the Over/Under at 8.5

Here are our best free Mariners vs. Astros picks and predictions for September 7.

Logan Gilbert (5-5, 5.14 ERA): Gilbert has been inconsistent as a rookie, posting an opponent batting average of .253 despite playing more than half his games at the most pitcher-friendly park in the majors. He is fresh off an outstanding performance against Houston last week when he threw five scoreless innings in a 1-0 Seattle home victory. That allowed him to bounce back from three consecutive poor starts — including a brutal performance in Houston where he surrendered nine runs before getting the hook midway through the fifth inning.

Jake Odorizzi (6-7, 4.32 ERA): The 31-year-old has been solid in his first season with the Astros, pitching to a 1.23 WHIP with an OBA of .234 through 89 2-3 innings. Odorizzi actually dueled Gilbert in two of his last three starts — allowing just six hits and two runs in 10 2-3 innings against the Mariners over those two games.

Mariners: Kyle Lewis OF (Out), Jake Fraley OF (Out).

The Mariners are 13-38 in the last 51 meetings between these AL West foes. Find more MLB betting trends for Mariners vs. Astros.

The Astros' big win last night moved them to 80-57 on the season with a comfortable 5.5-game lead ahead of the Mariners in the AL West. The Mariners are still within striking distance of the 'Stros and are just three games outside of the final wild-card spot in the American League.

While there might not be a huge gap when it comes to wins, there is a massive discrepancy when it comes to Pythagorean winning percentage (projected wins based on run differential), with the Astros second in the majors at .628 and the Mariners 20th at .457.

Gilbert will get the start for Seattle and while the rookie pitched very well against the Astros at T-Mobile Park last Wednesday, he also got lit up in Houston just 17 days ago. Among the 129 pitchers in the majors with at least 250 batted ball events, Gilbert ranks among the Bottom-15 when it comes to both average exit velocity and hard-hit percentage.

That's bad news as he faces a loaded Astros lineup that sits fifth in the majors in both exit velocity and hard-hit percentage.

The Mariners might be competing for a postseason berth but analytics suggest that they've been lucky and aren't anywhere near as good as their record suggests. With the Astros 38-13 in the last 51 meetings between these division foes and eight of Houston's last nine wins in the head-to-head coming by multiple runs, back the 'Stros on the runline.

Despite pitching an absolute gem last Wednesday, Gilbert still has a brutal 7.54 ERA in his last eight starts. The Over has also cashed in seven of his previous nine outings. Meanwhile, the Astros are 6-2-1 O/U in Odorizzi's last nine starts and he has pitched to a 5.21 ERA over that span.

The Astros are one of MLB's best offensive teams and rank second in both OPS (.777) and scoring (5.26 runs per game). While the Mariners average just 3.96 runs/game at home, they bump that number to a more respectable 4.51 in away contests.

The Over has cashed in four straight games for Seattle while the Astros are 5-2 O/U in their last seven games at home. With the Over also going 4-0 in the last four meetings between these teams at Minute Maid Park, back it again tonight. 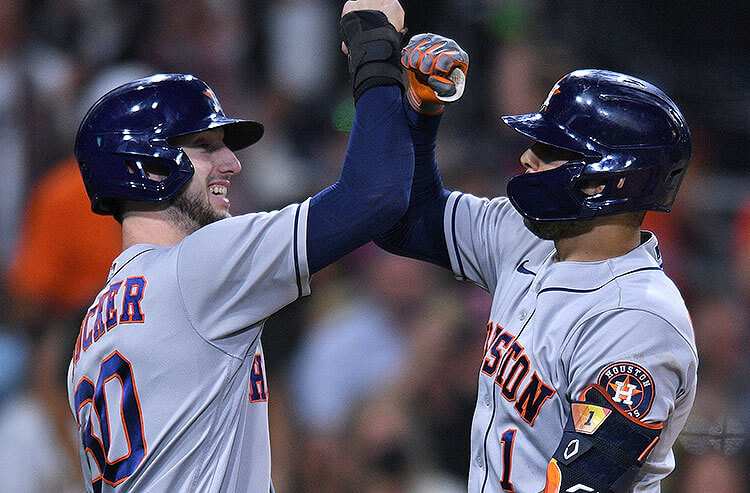